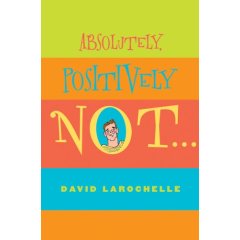 David LaRochelle on David LaRochelle: “My mother used to tell her friends that her son never grew up, and she was right. The things that I enjoy doing now (drawing, reading, making up stories, and using my imagination) are the things that I loved to do when I was a kid. A perfect evening for me as an adult is still a night spent with friends playing board games.

“I was born in Minneapolis in 1960, and I have lived my entire life in Minnesota. I studied art and English at St. Olaf College in Northfield, and even by then I was writing and illustrating children’s stories for my class assignments. When I graduated from St. Olaf in 1983, I had my future all planned out: I was going to be an illustrator for Hallmark Cards. When that plan fell through (I was told by Hallmark officials that I couldn’t draw well enough), I went on to plan B, which was to become an elementary school teacher. While teaching fourth grade I continued to write and draw, and was thrilled to have my work featured in a local children’s magazine. A fellow teacher and good friend, Kathy Haubrich, encouraged me to send one of my stories to a book publisher, but I balked, lacking the confidence. So instead, Kathy called up the editor herself and read my story over the phone (which is probably the surest possible way to annoy an editor). Miraculously the editor asked to see the story, and that was how my first book, A Christmas Guest (illustrated by Martin Skoro, Carolrhoda Books, 1988) came to be.

“I eventually left teaching to pursue writing and illustrating full time. Even though I am no longer a classroom teacher, I still visit many schools a year, which I enjoy a lot. I feel very lucky; I get to go into a classroom and do the things I like most (read my books, draw, tell stories, have kids create their own stories) without having to handle all the difficult aspects that regular teachers have to face every day.”

You’ve been writing children’s books for a number of years. For those new to your work, could you offer a brief list of your more recent backlist titles and some insights into what makes each sparkle?

My most recent picture book is The Best Pet of All (illustrated by Hanako Wakiyama, Dutton, 2004). It’s the story of a boy whose mother won’t let him have a dog, but says that he can have a pet dragon…if he is able to find one. Those are words that she lives to regret! Hanako’s retro-style illustrations are outstanding. They are nothing like I imagined when I wrote the story (I pictured a typical fat, scaly dragon; Hanako’s dragon is a thin, hip, debonair dude). Even though I have illustrated other books, Hanako’s artwork is far, far better than anything I could have dreamed up myself.

I also love puzzles, and a collection of six of my puzzle books has recently been released under one title, Detective Dave’s Mad Mysteries (Price Stern Sloan, 2006). Detective Dave is a bumbling sleuth, and it’s up to the reader to get him through each mystery.

Congratulations on the much-acclaimed Absolutely, Positively Not (Arthur A. Levine/Scholastic, 2005)! What was your initial inspiration for this story?

One day my friend Gary remarked to me how much he hated being coerced into taking a girl to his high school prom. Both Gary and I are gay, and I could easily relate to that feeling of awkwardness. I began to think of ways that a teenage boy, who was not interested in women but not yet ready to admit that he might be gay, could avoid taking a girl to his prom. My solution was that this boy could take a dog to his dance instead. While this might seem a bit far-fetched, when I was in high school two guys took mannequins to their prom. Why couldn’t someone take a golden retriever? This idea prompted me to write a humorous short story called “Taking Alice to the Prom,” which was published in Cicada magazine in 2001, and which eventually became my first novel, Absolutely, Positively Not.

What was the timeline from spark to publication?

I began working on the novel in 2000, and I didn’t finish my last revision until the fall of 2004. It went through many, many revisions, both before I sent it to Arthur Levine, and after. The original manuscript that I sent Arthur was only 80 pages, but with his encouragement to slow down the pace and give some more information about the major characters, it eventually became a 200-page book.

A huge challenge for me was making the switch from writing 500-word picture books to writing a full-length novel. When my editor wanted me to expand my 80-page story, I was terrified. I had written everything I knew about these characters and was extremely doubtful whether I could write anything more. It was a matter of going back to the very beginning and recreating the main character, Steven DeNarkski. If I had started with a more solid background in the first place, it would have saved me a lot of time and many rewrites, but then again, maybe I needed all those rewrites in order to learn about Steven.

Another challenge for me was that I was afraid I would have nothing of interest to say to teenagers. Typically I write for, and work with, much younger kids. But teenagers? I went back to my old high school for a day to sit in on some classes in order to sharpen my “teen awareness.” To tell the truth, it didn’t do me any good. I was never very knowledgeable about what was cool and trendy back when I was young, and I knew I couldn’t pretend to be knowledgeable about that stuff now. In the end, I relied on what I remembered feeling when I was a teenager. Fashions and language may have changed, but I think the emotions that teenagers feel today are in many ways the same. Young people still struggle with figuring out who they are. That’s what Absolutely, Positively Not is about: learning to be the person you truly are and not just the person that everyone expects you to be.

My final worry was that I thought the premise for my book might be outdated. With all the great role models today of proud and respected gays and lesbians, I thought maybe kids don’t struggle with identifying their sexuality anymore. And while it is easier for some kids in some places to admit to being gay/lesbian/bisexual/transgender, I learned from friends whose children were currently wrestling with these issues that it is by no means an easy process for a lot of young folks.

You’ve encountered some resistance from censors. What happened, and what was your response?

I had been asked to speak at a writing conference for young people. At the last minute, I was informed that Absolutely, Positively Not would not be allowed to be displayed at the book fair with the other authors’ books because the organizers felt that my book might make some parents uncomfortable. I was disappointed with this decision, but didn’t protest. However, my friend and fellow YA writer John Coy, was furious. He was scheduled to give a keynote address about “voice,” but at the last minute changed his speech to focus on the voice that was not allowed at this conference: my book.

I was awed and honored to hear him speak so passionately and forcefully against the censorship of books. But to be honest, I was also mortified finding myself at the center of this controversy. I am one of the least confrontational people you will ever meet, and while John handled the situation in the way that was right for him, it was not what I would have done.

In the end, the whole experience proved to be very positive. I received a great deal of support for my book, both from friends and strangers. After this incident, a similar writing conference which had refused to carry my book in the past, had my book on display this year. I guess sometimes it’s necessary to be confrontational in order to produce change.

What advice do you have for writers who find themselves in that position?

Be true to yourself. I know that some people would have liked me to have been more vocal and outspoken against the organizers of the event that banned my book. But that’s not the kind of person that I am. In the resulting newspaper interviews, I was careful to express how I felt, and not just what other people wanted me to say.

More globally, what advice do you have for beginning writers?

It was only after I began making my writing a top priority that I started feeling like a real writer. I had had some books published, but my career was not going in the direction that I wanted. Then I signed up for a writing class from a respected teacher, joined a critique group, and made writing a priority every day (well, most days). On my refrigerator is a sign that says, “How badly do you want it?” I want to be a successful author very badly, and if this is my dream (which it is), I’ve got to be dedicated to making it happen.

I enjoy camping, orienteering, playing most any kind of game, and going to theater. I love to enter contests, and have won prizes ranging from a 7-minute grocery shopping spree to $40,000! I also love to carve pumpkins, and I’ve even been featured on “Good Morning America” with some of my pumpkin creations.

My next book is a picture book illustrated by Richard Egielski. It is called The End, and is a fairy tale that is told backwards. Once again I was blessed with an outstanding illustrator. It will be published by Arthur Levine at Scholastic January of 2007, and I am quite excited!