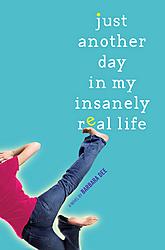 Just Another Day In My Insanely Real Life by Barbara Dee (McElderry/Simon & Schuster, 2006)(excerpt). From the promo copy: “Twelve-year-old Cassie has a lot to cope with when her father moves ‘out of the picture.’ Her mom’s constantly working overtime, her teenage sister’s going AWOL, and her little brother seriously needs attention. It’s up to Cassie to prevent total chaos at home–or so she thinks. She can’t control everything, though. At school Cassie’s two ‘best’ friends are turning nasty, and a cute boy is sending mixed signals. And then there’s Mr. Mullaney–the weirdest, hardest English teacher in the seventh grade–who hates everything she does. Since Mr. Mullaney isn’t even reading her brilliant work, Cassie starts submitting journal entries like A Virtual Tour of My Insanely Messy Desk. But her sassy humor isn’t winning her any friends or helping her ailing grades. What’s a girl to do when life gets totally insane?” Ages 10-up.

Barbara Dee on Barbara Dee: “I grew up in Brooklyn, the tall geeky kid whose head was always in a book. After graduating from Yale, I married a classmate, taught at Andover and at Kent School in Connecticut, and earned my M.A. in English at Middlebury College’s Bread Loaf School of English. Something possessed me to try law school, so I enrolled at the University of Chicago, where, amazingly, I made law review. I practiced law for a couple of unhappy years until the birth of my first son, then began reviewing books.

“When my youngest child started first grade, I said to myself: ‘Okay. You’ve always wanted to write a children’s book, and here’s your chance. The house is finally quiet, so no more excuses!’

“I wrote two warm-up manuscripts, then Just Another Day in My Insanely Real Life, which was published this past spring.”

Probably in the womb! I still have books I wrote when I was five years old. My kids think they’re hilarious, but I think they’re cute.

Congratulations on the publication of Just Another Day in My Insanely Real Life (McElderry, 2006). What was your initial inspiration for writing this book?

I live in a comfortable, peaceful suburb where many kids lead intensely structured lives. One day I found myself wondering what would happen if all that structure just fell away. And that’s when I started thinking about Cassie, who uses her fantasy journal–and her sense of humor–to cope with the chaos.

I also had a more general inspiration: I spend hours every week at the local library, scouring the shelves for good reads for my own middle-school-aged kids. It seems that for tweens there’s an abundance of new fantasy novels right now, but fewer set in the recognizable, actual world.

And while I have nothing against wizards and dragons, I do think there’s something profound and magical that happens when you look at a character and think: “Wow! She’s exactly like me!” So I decided to try writing a highly realistic story about a fantasy-obsessed kid.

The first draft, which was about a girl who turns her life into a science fiction story, took me just about four months to write in the spring/summer of 2003.

My wonderful agent Denise Shannon told me it was “good but still very rough.” One big problem, she said, was that girls simply didn’t read science fiction.

She also felt that Cassie’s mom needed to be more involved in the family, even if the novel’s premise was that she was always working overtime. So I developed Mom’s character and changed Cassie’s journal into a fantasy-novel version of her life (which was actually easier for me, and a whole lot more fun to write). Denise sent the manuscript around in the winter of 2004, and I didn’t hear anything for about five or six months.

Gradually, I began to get some non-form-letter rejections, usually praising Cassie’s voice but finding fault with various aspects of the plot (e.g., too much fighting between the sisters about food shopping).

One editor seemed a little more positive than the others, so Denise asked her if she’d be willing to reread the manuscript if I made the changes she suggested. When she agreed, I locked myself in my bedroom for two weeks that summer, unearthed my other rejection letters, and wrote a new draft that addressed as many of the criticisms as I could. I also added some new chapters that took the story in an entirely different direction–for example, when Cassie runs away on her bike, and has a revelation about her dad.

Denise loved the new version, sent it to the editor–who promptly mailed back a rejection. I was devastated, but I knew by then that the manuscript had more emotional depth.

And just a few months later, in the late fall of 2004, Margaret McElderry made an offer. I was lucky enough to have Karen Wojtyla as my editor, and she worked patiently with me until publication in the spring of 2006.

Two big challenges come to mind. One was writing an ending that accounted for Dad’s absence without tying it up with a perfect little bow. It was important to me that by the end of the book, Cassie begins to understand the difference between real life and fantasy: in fantasy novels, you can have “absolutely perfect conclusions,” but in real life, people sometimes act “insanely.”

I needed Cassie to be able to love and forgive her dad without having all the answers about his behavior, and I needed to accomplish this without compromising her funny/angry/anxious voice.

The broader challenge for me was serving the audience. I recently gave a speech to the Shoreline, CT chapter of SCBWI in which I described preteen readers as “tadpoles”–not quite children, not quite YA.

I think it’s incredibly tricky to write for this age group: on the one hand, you need to respect their innocence, but on the other hand, you can’t–and shouldn’t–completely avoid some challenging topics. But you have to touch on those topics very, very lightly, because there’s a chasm between what a fifth or sixth grader is ready to grapple with, and what’s increasingly available in the YA section (although I’m always delighted to see my novel there, as well!).

Of course, the most important thing is to create appealing characters, because I think that for middle schoolers, reading is almost a social experience. You need characters your readers can identify with, or maybe even want to hang out with.

What are the challenges of your writing life?

The main challenge is dedicating a solid block of time to work. I’m a mom, and there’s always someone to take to the orthodontist.

The fact that when I’m writing, I’m completely unscheduled. I don’t have to nag myself to work, or clean up after myself, or drive myself anywhere. I’m just at my computer, writing and deleting. And when something works, there’s no better feeling.

The other thing I love is talking to kids. When they really like what you’ve written, you can see it in their eyes, and that’s just so touching to me. And they have all sorts of brilliant ideas for a sequel, which someday I just might do!

Before you send your manuscript anywhere, try to find someone who’s able to be positive and critical at the same time. (My own first reader is always my husband, who knows how to tell me what doesn’t work without freaking me out.) And when you start to get rejection letters, try to view the negative comments as a vote of confidence.

After all, editors are incredibly busy people, and if they’re willing to rescue a beginner’s manuscript from the slush pile, read it all the way through, and then take the trouble to write up some feedback, they’re taking you seriously. Most importantly, consider what they’re telling you, especially if they’re all saying the same thing.

Aside from the typical mom stuff, swimming, doing crossword puzzles, and watching movies and baseball games.

I’m currently working on a manuscript about a girl who discovers she can read codes. I’ve finished the first draft, and it needs significant revision. But I’ve learned that writing is really just re-writing, so this isn’t surprising. Thanks goodness for the delete key!

An Interview With Barbara Dee from TeensReadToo. She notes, “You don’t have to figure out everything all at once. If you want to do something creative, or just hard, give yourself time.”