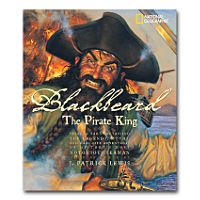 Blackbeard The Pirate King by J. Patrick Lewis, illustrated by vintage art (National Geographic, 2006). “Several yarns detailing the legends, myths, and real-life adventures of history’s most notorious seaman; told in verse.” Ages 4-up. Cyn Note: though marked for ages 4-up, this picture book would work as well for teen readers.

From the flap bio: J. Patrick Lewis is the award-winning author of more than 45 picture books for children. He is the author of a National Children’s Book Week poem and a frequent contributor of children’s book reviews for the New York Times. He lives in Chargrin Falls, Ohio.

I’m a walking, talking example of It’s Never Too Late. In my other life (first career), I was a professor of economics. Once I discovered poetry at the august age of 39, I never looked back. Seven years of rejections later, I published my first children’s picture book (1988). By the end of 2006, I will have added fifty more titles. So I guess you could say that I’d like to be a children’s poet when I grow up.

Congratulations on the publication of Blackbeard: The Pirate King (National Geographic, 2006)! What is it about pirates that is so fascinating? I’d put them up there with dinosaurs and Greek myths in terms of kid appeal.

Pirates appeal, I think, because of their clandestine nature. Kids (and adults) are hooked on the buried treasure, the eye patch, the battle at sea. Piracy stretches to the breaking point our collective imagination of a world so totally at odds with the one we know.

What was your initial inspiration for this book? Why Blackbeard?

I’m trying to write poems on every subject under the sun. Blackbeard, that mysterious swashbuckler, seemed liked the perfect foil upon which to hang a poem a two.

I never send anything in on spec (half-finished). I write the whole manuscript and let it fly. The editor liked what she saw, then hired the world’s leading Blackbeard expert, David Moore, to vet the manuscript. He did a fabulous job, and I tip my cap to him and to my editor for saving me from the occasional gaffe and for enriching the tale along the way.

The challenges involved no more and no less than slogging it out. I was so captivated–perhaps I should say captured–by Blackbeard and his rowdy, rousing life that I couldn’t help but soldier on until I had captured HIM.

What advice do you have for beginning children’s authors/poets?

First, the obvious: read, read, read. Second, the late John Ciardi told me just before he died to get hold of a very large wastebasket and keep it filled. Great advice, and I share it with children at every one of the forty or so school visits I make every year. I write every poem ten-to-twenty times. You simply cannot be a good writer without being a rewriter.

As a reader, what are your favorite recent titles for children/young adults and why?

Did I mention: Read, read, read? Let me add one more piece of advice: Read.