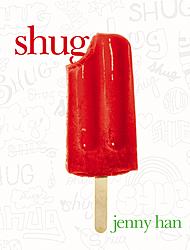 Shug by Jenny Han (Simon & Schuster, 2006). Annemarie Wilcox, called “Shug,” falls hard for her best boy friend, is stuck tutoring her worst enemy, and tries to navigate the whims of the queen bees without getting stung. Meanwhile, at home, big sister Celia is gorgeous, Daddy is gone too much, and Mama seems disappointed by life itself. Everything seems to be changing far too fast for Shug. A poignant, funny debut every girl must read the summer before junior high. Ages 10-14. HIGHLY RECOMMENDED.

This book really gets junior high!

As I’m reading, I stick a pink, heart-shaped Post-It note beside anything that really strikes me. On this ARC, I used 25, which may be an all-time record. I won’t go into all the specifics as that would give away too much, but I will share some of the reflections I had while reading…

I just loved the soft, simple scene where Shug and her best boy friend (not boyfriend, though she wishes that were so) Mark are riding bikes around the block on the night before school starts. “The way he’s pedaling so slow, I know he doesn’t want to say good night any more than I do, ’cause for some reason good night feels too much like good-bye. So neither of us say anything. We just wave and pedal off in different directions.” Can’t you just feel that?

A lot of the smaller nods resonate, too–the long walk between classes, the lunchroom table politics, the mixed symbolism of a girl’s first period, the weight of mothers’ expectations, the sudden awkwardness of dads, the peer pressure to drink alcohol, and the way a school dance can turn your whole life upside down.

What else? Truths and how they resonated in my own memory…

Everything changes, including your friends. I spent my latter elementary and junior high years living on a 14-house cul-de-sac in the Kansas (KC) suburbs. Everyone played together in the summers and after school. Then at a certain age, when tween social structures kicked in, we were a divided country.

Boys you love turn into boys you hate and vise versa. It’s a perilous thing when boys who’ve known you your whole life as a kid start looking at you as a girl, especially with regard to your changing body or lack thereof. I was the opposite of Shug, curvy where she was not, and I can remember being teased and called names because of it. Basically, it’s a no-win scenario.

Girls are just a nightmare, possibly including you. I remember floating somewhere in the B-C list, depending on who was calculating, being on the inside sometimes and the outside at others.

Best girl friends can get you through, so long as other girls, boys, and your respective egos don’t get in the way. [Arguably true from then on.]

On a related note, money matters, and you don’t have much control over it. I was a lower middle-class kid raised in an upper middle class neighborhood (my parents got a lovely house and put me in a “good” school district). But for all the posturing, kids can always tell.

Your parents turn into people, and you have to accept it. There was as much competition between parents in my suburb as in Shug’s small town–over us kids, money, who had the best lawn–and we kids often got caught in the zone of fire.

Speaking of parents, some of the best wisdom in the book comes from Mama, who isn’t otherwise the most solid of support systems: “‘People are gonna disappoint you sometimes. We’re flawed creatures. Not one of us is perfect, not even you, and you’ve gotta let people mess up and then you’ve gotta forgive them. That’s just life.'”

Incidentally, Shug and I both love school supplies, which I of course now call “office supplies.” I can’t start a new novel without buying everything fresh, no matter whether it makes sense financially.