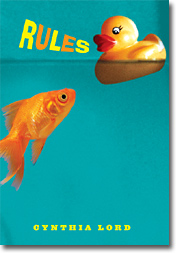 Rules by Cynthia Lord (Scholastic, 2006). Catherine, 12, finds herself torn between her love for her little brother David and her frustration with dealing with his autism. What will getting to know Jason, who talks with words printed on cards, and Kristi, who’s new in town, reveal about friendship and what’s really “normal?” Funny and touching with well-crafted characters. This debut should make a big splash. HIGHLY RECOMMENDED. Ages 9-up. See a recommendation from Debbi Michiko Florence.

Cynthia Lord is a former middle-school teacher and bookseller. She lives in coastal Maine with her husband, and though they have two teenagers, Cindy can still speak fluent Ubby-Dubby from her childhood days of wishing she were Lori on the PBS show “Zoom” (0-2-1-3-4! Send it to Zoom!). Cindy also won the 2004 SCBWI Work-In-Progress Grant for an Unpublished Writer. Learn more from Adams Literary, and read Cindy’s LiveJournal.

Congratulations on the publication of Rules (Scholastic, 2006)! Could you tell us a bit about your path to publication?

I’ve always loved children’s books and writing, but I didn’t put the two together until 2000, when I began writing Rules. Before that, I wrote short stories for adults, catalog copy, and teaching materials. Scholastic accepted Rules at the end of 2001, and I did several revisions between that initial call and publication.

What was your inspiration for writing Rules (Scholastic, 2006)?

I have a son with autism, and I wanted to explore the unique dynamics that exist in a family that has a child with severe special needs.

One thing I found missing in most books that included a character with special needs was the sense of community that families like mine so often have with each other. As soon as my son was diagnosed, we were immediately part of a network of special needs families and professionals.

My son had weekly occupational and speech therapy at a local clinic and at those appointments, I would meet other families who also had special needs children. We formed a sort of “waiting room club” and would cheer on each other’s kids as they hit milestones and comfort each other over challenges. My daughter was too young to stay home alone so I would bring her with me to her brother’s appointments. She grew up having one foot in two very different worlds.

“Where do we fit in?” is a question all families have to answer, and when you have a child with a severe disability that answer can be very complicated and conditional. I wanted to both grieve and celebrate that difference.

I wrote Rules in 2000, and it was accepted by Scholastic at the very end of 2001. Sometimes books need to be moved from list to list for a variety of publishing reasons, especially books by first-time authors, and that happened in my case.

I revised several times after the book was accepted, then it went to copyediting and typesetting last summer. There were also a few tweaking passes at the very end. It really brought home to me why an editor will say, “I have to love it” about a book he/she acquires. I saw firsthand how many times my own editor, Leslie Budnick, had to carefully and thoughtfully read through my novel.

My galleys came in November and just a few weeks ago, an exciting envelope arrived from Leslie with my first hardcovers.

One literary challenge for me was that I had to learn more about plotting. When Scholastic accepted Rules, the book was only a “slice of life,” more than a true plot. I needed to create for myself a crash course in plotting to fix that.

Psychologically, it proved challenging to write such a personal book. It was emotionally draining to keep digging backward to old feelings with each rewrite. Having Rules’ release date moved was especially hard, because I had to hold open emotions that I craved to close and grow past after awhile. But I couldn’t close them, because I knew I would have to access them again with the next rewrite.

It’s thrilling! Books today are beautifully produced, and there are so many amazing authors writing today. It’s both an honor and a joy to have people investing their talents in something I created from blank pages.

I’m even getting fan mail now from children and that touches me deeply each and every time.

I’m also honored to be interviewed by you, Cyn. I have always thought it would be incredibly cool to have an interview on your blog. So thank you for the opportunity.

I have more information about Rules on my website, including a discussion guide and a few interviews with me.

An Interview with Cynthia Lord from Meghan McCarthy.