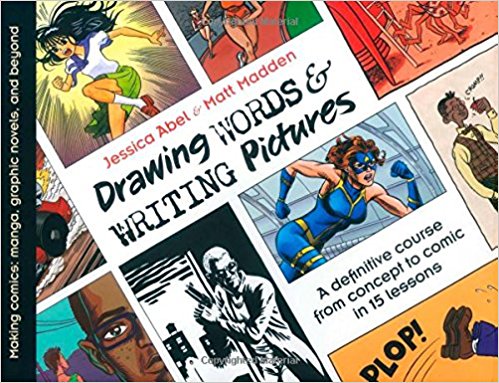 DRAWING WORDS AND WRITING PICTURES: A DEFINITIVE COURSE FROM CONCEPT TO COMIC IN 15 LESSONS by Jessica Abel and Mark Madden (First Second, 2008). PEEK: “a course on comic creation – for college classes or for independent study – that centers on storytelling and concludes with making a finished comic. With chapters on lettering, story structure, and panel layout, the fifteen lessons offered – each complete with homework, extra credit activities and supplementary reading suggestions – provide a solid introduction for people interested in making their own comics.”

MAKING COMICS: STORYTELLING SECRETS OF COMICS, MANGA AND GRAPHIC NOVELS by Scott McCloud (William Morrow, 2006). PEEK: “Scott McCloud tore down the wall between high and low culture in 1993 with UNDERSTANDING COMICS, a massive comic book about comics, linking the medium to such diverse fields as media theory, movie criticism, and web design. In REINVENTING COMICS, McCloud took this to the next level, charting twelve different revolutions in how comics are generated, read, and perceived today. Now, in MAKING COMICS, McCloud focuses his analysis on the art form itself, exploring the creation of comics, from the broadest principles to the sharpest details (like how to accentuate a character’s facial muscles in order to form the emotion of disgust rather than the emotion of surprise.) And he does all of it in his inimitable voice and through his cartoon stand–in narrator, mixing dry humor and legitimate instruction. McCloud shows his reader how to master the human condition through word and image in a brilliantly minimalistic way. Both comic book devotees and the uninitiated will marvel at this journey into a once–underappreciated art form.”

UNDERSTANDING COMICS: THE INVISIBLE ART by Scott McCloud (William Morrow, 1994). PEEK: “Praised throughout the cartoon industry by such luminaries as Art Spiegelman, Matt Groening, and Will Eisner, Scott McCloud’s UNDERSTANDING COMICS is a seminal examination of comics art: its rich history, surprising technical components, and major cultural significance. Explore the secret world between the panels, through the lines, and within the hidden symbols of a powerful but misunderstood art form.”

8 of the Best YA Comics for New Comics Readers by Alice Nuttal from Book Riot. PEEK: “There are many stories out there that have all the best-known YA hallmarks – a teenage or young protagonist, fighting for what’s right in an unjust world or (sometimes and) falling for their first love while working out the kind of person they want to be.”

13 Diverse Graphic Novels for Kids from Thien-Kim at I’m Not the Nanny.

Adapting Prose to Comics Form by J.L. Bell from Oz and Ends. Peek: “In answer to the question ‘What types of prose books are the most suited for adapting to the graphic format?’, three of those editors offered responses that seem typically gung-ho for fans of the medium.”

Children’s-YA Graphic Novels Get Expanded BISAC Codes by Brigid Alverson from Publishers Weekly. PEEK: “The Juvenile Fiction category has 43 headings for fiction about animals alone, while it has only four subcategories for comics and graphic novels. The expansion of BISAC codes for children’s and YA graphic novels follows a larger overall expansion of children’s BISAC categories, earlier this year.”

Graphic Novel TK: “Your podcast guide to comic book publishing, hosted by Alison Wilgus and Gina Gagliano, brought to you by The Beat.”

What the Kids are Reading: The Booming Business of Children’s Graphic Novels and Comics by Matia Burnett from Publishers Weekly. PEEK: “Irvins noted how comic book stores frequently ‘have specific sections for kids’ these days and Shenton believes that kids today are looking for books with subject matter that extends ‘beyond superheroes.’ He added that ‘kids can handle complex subject matter and don’t like being talked down to.””

Why Graphic Novels are the New Frontier in Middle Grade by Sarah Diamond from SCBWI.