April Lurie is the first-time author of DANCING IN THE STREETS OF BROOKLYN (Delacorte, 2002). This interview was conducted via email in August 2002.

Your debut novel is set in 1940s New York and features Norwegian Americans. What was your interest in this era, locale, community, and what, if any, research was necessary in writing this novel?

I’ve always been fascinated with the stories my parents have passed down to me from their childhood.

My mom and dad grew up in the 40s, in the Norwegian community of Bay Ridge, Brooklyn, and knew each other at a very young age. Even though there was little money and everyone had to make sacrifices during the war, it was a wonderful time to be a kid. Instead of TV and Nintendo, they were out playing ball in the streets. They’d use old broomsticks for bats, and make go-carts from wooden crates and old skates. Things like that. If they didn’t have money for candy, they’d just fish some pennies out of the sewer.

In a way, it was a very innocent time. As I was writing this book, I called my parents constantly, asking them many, many questions. They were always patient with me and happy to help. I also read a number of books about the 1940s, but most of my information came directly from my parents.

The story touches on the theme alcoholism. Why do you think this is an important theme for young teens to read about and discuss?

In the story, Judy discovers that her real father was an alcoholic and had abandoned their family years ago. Jacob struggles with his father’s drinking binges in the neighborhood bars.

When alcohol abuse is an issue in families, shame naturally follows. Judy and Jacob must come to terms with the behavior of their parents. This encompasses a realization of who they are themselves, the fact that their parents are not perfect, and eventually this can lead them to forgiveness.

What, if anything, do you have in common with Judy Strand, your protagonist? What inspired you to tell her story?

Judy started out to be a girl who was a lot like my mom growing up ‘ a tomboy, strong and athletic, having to always drag her little brother around because her mother was so busy with chores. But as I was writing the story, Judy also turned out to be a lot like myself ‘ shy, sensitive, and sometimes secretive. I think every character we create has a part of ourselves in them.

What is it like to be a first-time author in 2002? What are your joys, your anxieties, your hopes for your novel and writing career?

It’s all very new and exciting for me. It feels wonderful when someone connects with what I’ve written, when it touches their lives in some way. The book comes out in October, and I’m really looking forward to hearing from kids. They are so honest.

Can you tell us a little bit about your path to publication?

About seven years ago I fell in love with children’s literature all over again. I was looking for good books for my own kids to read, and then I started reading them myself. After I read THE WITCH OF BLACKBIRD POND by Elizabeth George Spears, and WALK TWO MOONS by Sharon Creech, I said, “I want to do this. I want to write a book like this.” And that’s what I did. Then I went through years of rejection and revision until the day I received a phone call from Francoise Bui, my editor. “I want to buy this,” she said. I almost fainted. It was a wonderful day.

What were the earliest inklings that you would someday become a writer?

As a kid, I always loved to read, but I never thought I’d write. In high school I had an English teacher who gave several creative writing assignments. He liked my stories, and he read them aloud to the class. I was shy – I almost hid under the table when he did this – but it made me feel good inside. I studied nursing in college, so I didn’t have too many writing opportunities, but I wrote in a journal every day. I also read on my own ‘ authors like Tolstoy, Dostoyevsky, Hawthorne, and Hemingway. Reading and writing was an outlet for me, but I never thought I would pursue writing as a career.

What encouragement helped you along your way?

As I was writing DANCING IN THE STREETS OF BROOKLYN, it was my husband, Ed, who encouraged me the most. He was my first reader, and he told me the truth. He’d say, “This is good,” or “this part is awkward,” or “this makes no sense,” or, “this is funny.” If it wasn’t for Ed, I’m not sure I would have continued.

There were many, many rejections along the way, but I decided early on that no matter what happened, I would always be thankful that I wrote this book. It was a gift for my parents, and I had a blast writing it.

What books were among your childhood favorites and why?

Hmm, I was a strange kid. I remember reading MRS. PIGGLE WIGGLE because everyone else did, but then I discovered Alfred Hitchcock stories at the library and I was hooked. I also loved Judy Blume’s ARE YOU THERE GOD? IT’S ME, MARAGARET and when I was a little older, THE PIGMAN, by Paul Zindel. In high school, REBECCA by Daphne Du Maurier, made a big impression on me, and then I read my all time favorite, CATCHER IN THE RYE by J.D. Salinger.

What are your favorite titles today and why?

Ooo, so many. BECAUSE OF WINN-DIXIE by Kate DiCamillo is my all time children’s favorite. Then there’s WALK TWO MOONS by Sharon Creech, THE WATSONS GO TO BIRMINGHAM–1963 by Christopher Paul Curtis, My LOUISIANA SKY by Kimberly Willis Holt, and BELLE PRATER’S BOY by Ruth White. In YA, I love SPEAK by Laurie Halse Anderson, ANGUS, THONGS, AND FULL FRONTAL SNOGGING by Louise Rennison, and THE GIVER by Lois Lowry.

In adult fiction, I love GIRL WITH A PEARL EARRING by Tracy Chavalier, FORTUNE’S ROCKS by Anita Shreve, and MEMOIRS OF A GEISHA by Arthur Golden.

Read. That’s the key. The only way to learn how to write is to read great literature. Find out what you really like, and then read everything in that genre that’s been published in the last five years. Then join SCBWI, and start connecting with other writers. If you don’t have a wonderful husband like mine who can edit your work, then join a critique group with people you can trust.

How does your experience as a parent inform your writing?

Even though I have kids of all ages, I seem to write from the teenager inside me. I think it helps to be around kids, to listen to them speak and watch how they act, but remembering what it was like way back then is the way to create your story and your characters.

What advice do you have for parent-authors? 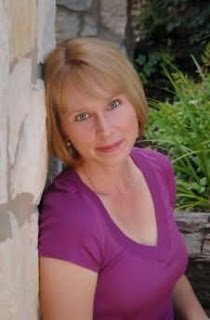 Always put your kids first. I think that’s important for everyone, everywhere, no matter what you do. It’s one thing you’ll never regret.

For you, what is the hardest part of being an author?

Writing the first draft. It means I have to come up with new ideas. I like re-writing much better.

I love it when my characters become so real, it’s like I’m spending an afternoon with my friends, when really I’ve been alone, working. Then when my kids come home from school, I feel refreshed, and I feel like I’ve accomplished something.

Hmm, I wonder if grocery shopping could be considered a hobby. Well, besides taking care of my kids and trying to have one conversation a day with my husband, I like to read, take long walks, go to the gym, get together with friends, and for a real treat, play racquetball. Mostly, I’m a homebody.

How would you describe the person you are today?

Happy and thankful for the life I’ve been given. I have no complaints.