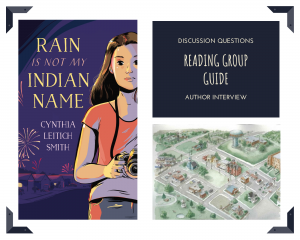 Cassidy Rain Berghoff didn’t know that the very night she decided to get a life would be the night her best friend would lose his.

It’s been six months since Galen died, and up until now, Rain has succeeded in shutting herself off from the world. But when controversy arises around her aunt Georgia’s Indian Camp in their mostly white Kansas community, Rain decides to face the world again—at least through the lens of her camera.

As the new photographer for her town’s newspaper, Rain soon has to decide how involved she wants to become in Indian Camp. Does she want to keep a professional distance from her intertidal community? And, though she mourns, will she be able to embrace new friends and new beginnings?

In a voice that resonates with insights and humor, author Cynthia Leitich Smith tells of heartbreak, recovery, and reclaiming one’s place in the world.

On New Year’s Eve, I stood waiting my turn in the express aisle of Hein’s Grocery Barn, flipping through the December issue of Teen Lifestyles. The magazine reported: “76% of teenagers who responded to our Heating Up Your Holidays survey indicated that they had French-kissed someone.” The next day was my birthday, and I’d never kissed anyone—domestic style or French. Right then, looking at that magazine, I decided to get myself a teen life. Tradition was on my side. Among excuses for kisses, midnight on New Year’s Eve outweighs mistletoe all Christmas season long. Kissing Galen would mark my new year, my birthday, my new beginning. Or I’d chicken out and drown in a pit of humiliation, insecurity, and despair. Cassidy Rain Berghoff, Rest In Peace.”

Q: What first inspired you to write this story?

A: When I was fifteen, a boy from my high school died suddenly of a previously undetected heart defect. I was standing right there at the track meet when it happened and found myself long haunted by that day. As I finally began my first novel, I considered the long-time healing required by the loss of a loved one. Setting that theme in a contemporary Native American setting was a natural, simply an extension of the people and places I knew in real life.

Q: Do you have anything in common with the characters?

A: Like Rain and Galen, I was a holiday baby. I was born on December 31 in the middle of one of the worst snowstorms in Kansas City history. My mother jokes that she missed four parties that night (my mother isn’t much one for parties), and my father joked that I was his “little tax deduction” because I’d been born just in time for him to deduct me as a dependent.

Q: How did you come to know Rain as a character?

A: One of the challenges in writing Rain was that, despite her sense of humor, she is so withdrawn at the beginning of the book. She doesn’t want to go anywhere or do anything with anybody (including me, the author of her story). It’s a major accomplishment for her to go to the neighborhood grocery store. To spur her into reconnecting with the world, I had to create a scenario in which she felt obligated to take action. By accidentally tilting the Aunt Georgia-Mrs. Owen power struggle in favor of Mrs. Owen, Rain becomes responsible for the fallout—Mrs. Owen’s letter to the editor, which uses Rain’s non-participation in Indian Camp against Aunt Georgia’s financing request—and therefore Rain tries to at least repair the damage she has done. Basically, I had to offer her some incentive, some motivation to break her behavior pattern.

Q: Why do your characters use both ‘Native American’ and ‘American Indian’?

A: Many people from the intertribal community have a preference for one over the other. Some don’t care. In this story both are used. A few characters rely on one consistently. Others switch back and forth. To the extent possible, Rain prefers to use specific Native Nation (or tribal) names, and when speaking broadly she alternates between Native American and American Indian. With regard to tribal names, careful readers will notice a sprinkling of traditional and imposed names. In historical books, a common factual error is to have Native people refer to themselves by imposed names. However, in a contemporary setting, I had to consider that after so many years of imposed names, many of today’s Native people have adopted them into day-to-day speech.

As an author, my job is to make characters come alive as individuals. The choice of each individual character between Native American or American Indian or a particular tribal name is determined largely by their upbringing, perspective, and in some cases, what they’re trying to accomplish with the reference.

This is true with all of their choices. I don’t always agree with the words or actions of my characters, but I frame them thoughtfully.

Q: Grampa Berghoff plays an important role in Rain’s life, and postcards/email relating his on subplot are a humorous aspect of the novel. How was this character crafted?

A: In earlier drafts of the story, Grampa Berghoff and Dad do not appear through phone calls or postcards. In fact, Grampa Berghoff didn’t even live in the house although his home was just around the block.

I was interested in Rain and Fynn’s sibling relationship, how they would cope and interact without more adult supervision (though Fynn is an adult, he’s barely out of college), and I envisioned Grampa Berghoff, Uncle Ed, and Aunt Georgia all playing an active role in the household whether it was their full-time home base or not.

However, my editor urged me to consider moving Grampa in, and that ultimately felt like the best way to go. The non-traditional family structure is still there, but Grampa’s role somehow seems bigger, both onsite and as Rain’s photography mentor.

Something I’d noticed in the body of children’s literature with interracial Native figures is that their elders were almost always exclusively from the Indian side of their family (and Yoda-like wise). Including both Grampa Berghoff and Aunt Georgia in the cast brought Rain out of the much explored “caught between two worlds” scenario often envisioned with Native characters. Instead, her daily life is fully integrated from the elders on down.

Q: Why do you use a non-linear structure with Rain’s journal entries?

A: Mainstream U.S. (and to a lesser extent European) novelists tend to write children’s and young adult novels in a very linear way “as if an arrow were shooting through the manuscript.” They tend to be about the triumph of individuals. Depicted families tend to be smaller. Community is not reflected in most stories.

In contrast, Native novelists tend to be less linear, more circular (though this can be overstated), and offer more stories of extended families and communities. Why? It’s partly a cultural perspective issue. In especially the U.S., society is in large part based on individual rights and responsibilities. In contrast, Native cultures tend to favor community rights and responsibilities. The two novel styles are an extension of the cultural value systems that inspire them.

Q: Is your connection to Rain’s Kansas town rooted in real life?

A: I created Hannesburg, a fictional town, for the novel because the city council played a role in the story, and it seemed best to distance the fictional events from a real political landscape. In the process, I drew on my own experiences as a reporter in small towns, my familiarity with Douglas County, Kansas, and my affection for German-American towns.

Probably the most influential town, however, was Belton, Missouri, which is not far from the Kansas border, and home to several members of my extended family. Rain’s house was largely based on my aunt’s near downtown Belton, and in fact, the corner of the house shown in the black-and-white photograph on the cover is hers. I’d sent a photograph of it to the illustrator, along with other materials, and it was fun for my family to spot it on the book.

Q: One of the reviews mentioned the “sharp wordplay” in RAIN, and you also have such humorous touches in INDIAN SHOES. Do you think of yourself as a funny person, or where does this side of your characters come from?

A: I enjoy humor, and young readers do, too. It’s not appropriate for every book or every moment within a given story, but it’s terrific when it works. I have received mail from Native readers saying how wonderful it is to find humor in my books, especially “Indian-style” humor.

It’s interesting… My work includes (hopefully) humorous material that speaks to both the insider and mainstream audiences. Different readers seem to “get” different jokes, depending on their own backgrounds. I don’t know if I’m a funny person, but much of life strikes me as hilarious. And when it doesn’t, a wry observation can go a long way to making me feel better. It’s not so much about “looking on the bright side,” but acknowledging the absurd and the joyous. It’s good for balance, for the soul.