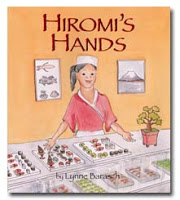 Hiromi’s Hands by Lynne Barasch (Lee & Low, 2007). Hiromi wants to spend more time with her sushi-chef Papa so she begs to go to the fish market with him. When he sees her interest is sincere, he begins to teach her about the fish. Later, she decides her dream is to be a sushi chef, just like him. Ages 4-up. See a preview of the story and read a Book Talk with Lynne from Lee & Low.

Lynne Barasch has written and illustrated several award winning children’s books, including Knockin’ On Wood (Lee and Low 2004) a notable Social Studies Trade Book for Young People and winner of the Patterson prize for Books for Young People. Radio Rescue (Farrar Straus and Giroux 2000) was an ALA Notable Children’s Books and on the Texas Bluebonnet Award Masterlist. She was born in New York and raised on Long Island but has lived in New York City most of her adult life.

What first inspired you to write and illustrate for young readers?

All my life I have painted and done drawings. I went to art classes as a child and to the Art Students League on Saturdays when I was in high school. I went on to Rhode Island School of Design but left to get married after one year. Years later, I returned to Parsons School of Design and graduated in 1976.

The first inspiration for a picture book came when my little girl Cassie was in kindergarten. She got on the wrong bus and went to the wrong school on her second day of school! I called that story, “The Bus Fuss.”

It is still unpublished but I was hooked..and never looked back. My fingers can barely keep up with the projects in my mind.

I never had formal training to write but was always an avid reader.

Can you describe your path to publication–any sprints or stumbles?

After “The Bus Fuss” and years of working on other things, I went back to Parsons and met the wonderful writer-illustrator and teacher Brooke Goffstein. Through a series of phone conversations that lasted hours each, I somehow learned what and why I was writing. I was, as Brooke said, shot out of a cannon. I wrote four books, complete with illustrations, in a matter of months. They are the core of my work. Old Friends (FSG, 1993), “The Ansonia Ghosts” (unpublished), Sixty Four “Cottage Street” (unpublished), and “Good Feet” (unpublished but through this came Knockin’ On Wood).

Could you update us on your recent releases?

The Reluctant Flower Girl (HarperCollins, 2001). A young girl comes to terms with her sister’s upcoming marriage. Inspiration for this was my eldest daughter’s wedding. Her two little sisters combined are the basis for the flower girl in my story.

Knockin’ On Wood (Lee and Low 2004). This is the biography of Peg Leg Bates, the famous African American tap dancer extrordinaire (he had only one leg).

A Country Schoolhouse (FSG, 2004). A grandfather tells his grandson about his rural school days in the 1940s in a three-room schoolhouse.

Ask Albert Einstein (FSG, 2005). Based on a true event and an article that appeared in the New York Times in 1952, this is the story of a little sister who writes to Albert Einstein to get math help for her big sister.

Could you tell us about the story behind Hiromi’s Hands (Lee and Low 2007)?

I first met the real Hiromi as a shy kindergartener in my daughter, Dinah’s class. It was Dinah who suggested I write this story about her friend.

Hiromi was delighted when I approached her with this idea. She was very helpful and emailed me answers to my countless questions along the way. And I got to know her better during this process. One day, she could write her own story, being articulate and thoughtful as she is!

As an illustrator, I am always writing with pictures in my head. I don’t use paragraphs when a few words will do!

So far, Hiromi’s Hands has received a starred review from Kirkus Reviews.