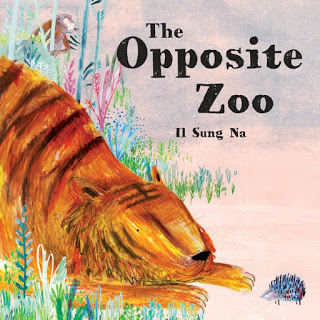 Congratulations on the release of The Opposite Zoo (Alfred A. Knopf, 2016). What was the initial spark for this picture book?

Thank you! I am so excited about this book.

Even though the concept of opposites has been on my wish list for a long time, I did not know where to begin. I started writing down my favorite things to draw, which are animals. Then I thought about a place where we can see many animals at once. So I ended up with a zoo.

Why monkey as a framing character?

He is a tricky character indeed. I thought, a monkey is like a child. They act and behave like children sometimes. Well, I could say both monkeys and children are unpredictable and have curious eyes in a way.

In this book, we needed a character who is not trouble-maker, but someone who can have an explorer-mind.

I normally spend months picking an idea, developing it into a story and drawing. But this one did not take that long! From the idea until I pitched it to my editor, it took three weeks.

I struggled the first week to get it right, but once I figured it out, everything came at once. This was really a unique experience that I never had before since I started my career. Of course there were many things to be discussed and revised, like adding the monkey character to lead the whole story.

Although it took more than a year until the book actually published, I really enjoyed the whole process and I felt everything went so quickly.

What were the challenges (personal, research, logistical, emotional) in bringing the book to life?

During my research, I realized that there were so many “opposite” books already out there, and it was my challenge to make a new “opposite” story. I also always have a hard time making good endings for most of my ideas. That’s why I still have many ideas in my folder, which I think are interesting concepts, but I have not been able to solve how to end those stories.

But this one was different. When I figured how to start and end the story, that was the moment that my brain clicked. The middle parts followed naturally. I carefully selected opposite words.

The book is for younger readers, thus the vocabulary needed to be simple. And I skipped my regular process of revising the story, revising thumbnail sketches several times, shifting the whole layout back and forth. I jumped straight into color illustrations once the idea was polished.

What artistic approach and risks did you embrace?

I wanted to illustrate this book in a different way, not in the same way I have done so far. The risk I had was how to approach this story in a fresh manner. I tried mono-print, watercolor, ink and color pencils. I spent the first week developing the idea and story, and I spent second week making color samples. I wanted more free-form lines and shapes in contrast to my previous illustrations.

So using ink-my long time favorite materials-was a risk: the effects had the potential to go astray with this new method.

What advice to do you have for children’s book creators working on concept books specifically?

Don’t worry about writing skills, if you think you don’t have them. It’s ideas that count. It’s not how you well write a perfect story, but it’s what strong idea you have and how you tell it in your own way.

So be brave, be bold, be creative and most importantly enjoy.