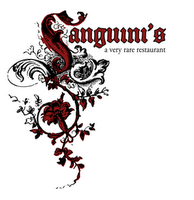 The logos are now available on T-shirts, a mousepad, and a cutting board for sale at Printfection and on more T-shirts, a mug, a magnet, and a sticker at CafePress.

Shop Sanguini’s at Printfection and CafePress.

Read a story-behind-the-logos interview with Gene and see the other Sanguini’s logo option.

Hurry, hurry! Zip over to Julia Durango’s LJ to enter her giveaway of Angels Watching Over Me, illustrated by Elisa Kleven (Simon & Schuster, March 2007). Read a related Cynsations interview with Julia.

Artist and Author Cynthia von Buhler Talks about Her Cats at CatChannel.com. Cynthia is the author-illustrator of The Cat Who Wouldn’t Come Inside (Houghton Mifflin, 2006).

A couple of bloggers have commented on my recent interview with Not Your Mother’s Book Club, specifically about my revision process. Check out Justine Larbalestier’s “Different Strokes” and Stephanie Gunn’s “suddenly my writing methodology doesn’t seem so strange.”

Thanks also to Elizabeth Garton Scanlon and Lara Zeises for cheering my new release, Tantalize (Candlewick, 2007), and return to blogging. Read Cysational interviews with Elizabeth, which was recently recommended by HipWriterMama, and with Lara.

Read the latest interview with Cynthia Leitich Smith (me again) at Not Your Mother’s Bookclub. The topic is my new YA gothic fantasy title, Tantalize (Candlewick, 2007), and the Q&As are fangfully fantastic. Here’s a sneak peek:

“As for the long answer… It hardly seems possible, but I first began looking through magazines for photos to inspire characters and asking them to write letters to me in late 2001. I don’t know though that I did more than just flirt with the story in that first year. I was essentially gathering courage. In the couple of years that followed, I wrote short stories for a number of anthologies, taking full advantage of the opportunity to stretch my skills. Write stronger. Braver. Fangs out. Eventually, I sank in with a vengeance.”

Check out the latest review, this one from the Wordcandy Blog. Here’s a taste: “Tantalize features a genuine sense of foreboding, contrasted with the frenetic atmosphere of a major restaurant opening. This unusual combination made for a constantly surprising and highly effective horror story.”

The 11th Carnival of Children’s Literature from MotherReader.

From Page to Screen: Gabor Csupo’s Bridge to Terabithia by Martha V. Parravano from The Horn Book.

Debbi Michiko Florence has launched her redesigned author site. See her new interview with Sally Keehn, author of Magpie Gabbard and the Quest for the Buried Moon (Philomel, 2007). Learn more about Debbi’s superheroic web designer Lisa Firke of Hit Those Keys (who also is my web designer).

The YA Authors Cafe offers its first interview at a new location. Cynthia Leitich Smith (that would be me) is the featured author, and I’m talking about Tantalize (Candlewick, 2007).

Here’s a sneak peek: “My world is eclectic, and (also unlike most genre fiction) reflects the diversity of our real one. Peel back the scary romp, and there’s depth there–thematic treatments of alcholism, feminism, race and class relations, all through analogy. But many YAs will just enjoy the marinara-baked chills, and that’s just fine.”

Read the whole interview. Leave a question in the comments today.

Here are the official blurbs:

“Looking for something to read that will make your TV jealous? Cynthia Leitich Smith’s Tantalize has it all—hot vampires and wolf-boys, a super-cool heroine in cowboy boots, nail-biting suspense, romance, chills ‘n’ thrills, and Austin, Texas. What more could you want?”

—Libba Bray, author of A Great and Terrible Beauty and Rebel Angels

“Full of unexpected, delicious delights that kept me guessing and turning the pages, Tantalize creates a froth of danger, suspense, and wit. This original book tantalizes the senses indeed, as it explores the border between attraction and disgust, and makes us question our perceptions. Who are you? Predator or prey?”

—Annette Curtis Klause, author of Blood and Chocolate, The Silver Kiss, and Freaks! Alive on the Inside

In breaking news, we have new reviews:

“If Joan Bauer took a crack at dark fantasy, the result would probably be something like this gothic-horror comedy…” and goes on “…the immersion in food culture–including an overhauled menu, as grisly as it is gourmet–successfully builds on the sensual aspects of vampire mythology.”

“An intoxicating romantic thriller… Quincie’s longing for a physical relationship with her boy-wolf is as palpable as the taste of the food… Smith adds a light touch of humor to the soup, but the main course is a dark romance with all the gory trimmings.”

“Quincie must make a terrifying choice in a heart-pounding climax that will have teen readers weeping with both lust and sorrow.”

Check out all the buzz!