I was forty when my first book was published in 1977. Pretty old!

And it was a tough time in my life. I was leaving a 21-year marriage and leaving it—by choice—with nothing: no alimony, no house; just my car and my typewriter.

And I’d never had a real job, had no profession to fall back on: just the freelance magazine work I’d been doing as a photojournalist, and the one book which just by chance had been requested by an editor at Houghton Mifflin who had read something I’d published in a magazine. “You sound like someone who might be able to write for young people,” she told me, though what she’d read had been a story for adults.

No promise to publish what I wrote, but at least I had someone who was interested in seeing it—and who, in fact, did give me a contract. It meant that I could pay my rent.

I had not planned to be a writer for kids. Since college, where I’d majored in writing, I had planned, of course, on the great American novel. With four kids born in five years, though, I never got around to writing it.

Then by the time that first book, A Summer to Die, was published (it had no title when I sent it to the publisher. And I sent it by snail mail. Typed pages—I had a carbon copy at home. Remember carbon paper?) I was living in a rented apartment over a garage, trying to jump-start a new life.

The publisher kept sending me copies of reviews with excited notes: Another star! What did that even mean? I hadn’t a clue.

Phone calls came with news…this was 1977, long before email, of course…the paperback rights had been sold! The book had won the IRA Award! The California Young Readers Medal!

It was as if they were speaking a foreign language. But I was hearing something, an undertone of sorts, that was whispering: This. This is how you can make a living.

So I rolled a clean sheet of typing paper into the typewriter, set the margins, and began writing a second book for young people.

And there you have it: a pretty ignominious beginning. I wish I could say, as so many new writers do today, that I had a passion for children’s books, that I studied them carefully, that I took courses, went to seminars, formed a writers’ group, joined the SCBWI…etc..etc.

But few of those things were available then. And in retrospect, I think it served me well to feel my way into the field very tentatively and in total ignorance, without an agent, without expectations.

Bumps? What was Bette Davis said in “All About Eve” (“Fasten your seat belts; it’s going to be a bumpy night…”)? 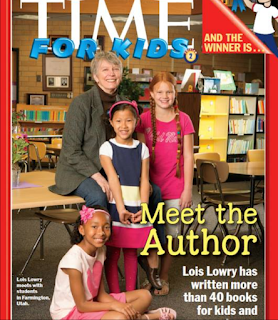 I’m not sure, in those early days, that I could have predicted “bumps”…or that such a prediction would have steered me away from this profession.

Of course there were some: mostly things I couldn’t have predicted. The famous writer who accused me of plagiarism (I hadn’t even read his book). The website that called me “The Antichrist.”  The things I labored over…and the editor didn’t like them.

The book that was published with mis-ordered chapters! Yikes; that one hurt.

The book I published under a pseudonym, and with a manufactured author bio…and then it won a big award, and the publishing representative had to accept on behalf of the author “who unfortunately can’t get here from her home in the Midwest….”

But on the whole I could have left my seatbelt unsecured. It has not been terribly bumpy for me. I’ve been lucky.

Well, I would have sent in my first manuscript with a title on it, for sure! But aside from that jokey comment, I’m not sure I would have done anything differently, given the circumstances.

My first book, simply by chance and not design, was based on the death of my older sister when we were both young. It was a story I’d been telling myself for some years, the way we always go through tough personal things in our heads, trying to explain them to ourselves. The suggestion from an editor that I write a book meant that I found a place to set those thoughts down on paper.

But the timing was interesting. There had not yet been, to my knowledge, children’s books dealing realistically with the death of a young person (Beth, in Little Women (by Louisa May Alcott (1869))? Come on. Give me a break.)

And yet, my book was published in the same year as Katherine Paterson’s wonderful Bridge to Terabithia, which won the 1978 Newbery Medal (a medal, incidentally, that I was practically unaware of). Something must have been in the atmosphere which made the timing right for A Summer to Die.

And then I watched realistic novels become a little trendy, as things do. Eventually the trend led to some awful books, so called “problem novels.”

Pendulums, I guess, always swing too far. But their momentum dies; eventually realistic fiction about kids with problems settled in reliably for the long haul. Oddly, though I don’t think that I “caused” it in any way, I watched some others of my own books become trendsetters.

Number the Stars (1989) was an early one of countless Holocaust books (though it had been long preceded by Anne Frank’s diary (1947), deservedly a classic, and Esther Hautzig’s The Endless Steppe (1968), among others).

Later, The Giver (1993) seemed to spawn an entire generation of so-called dystopian fiction; several editors confided jokingly to me that they dreaded seeing yet another futuristic manuscript.

And how on earth did it happen that in 2011, Richard Peck, Cynthia Voigt, and I all wrote books in which the characters were exclusively mice? But those are thematic and stylistic trends.

The big changes I have observed over the years are more in terms of marketing. The book tours! (And then, as the internet took over, the fewer “real” book tours). The speaking engagements!

Goodness, if someone had told my introverted self back in 1977: If you become a writer of YA fiction, you will have to go and make speeches….I might have closed up my typewriter and looked for a real job.

Learn how to “track changes”!

Practice saying no to people.

Save receipts for the tax guy.

Most importantly, take yourself seriously.

Carve out a sacrosanct space in which to work. I wrote my first book sitting at a little table in the corner of my husband’s study, with his big important desk looming behind me. I shouldn’t have settled for that.

I wish that all of their wonderful books be translated into a zillion languages so that kids around the world will all be reading the same stories, laughing at the same jokes, weeping with shared sadnesses; and that somehow this will bring us all together in this world, and connect us in the ways that matter.

I just hope that in this last chapter of my life, my brain and imagination remain intact! That I can still maintain a relationship with young readers, and that I never lose the sense of joy that comes to me from putting words together on a page.