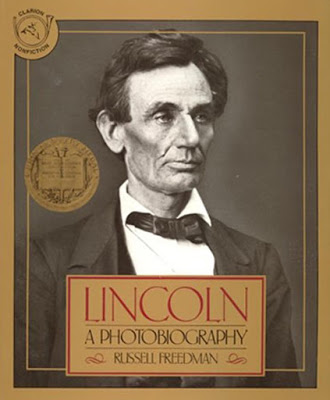 “The prolific nonfiction author — winner of the 1988 Newbery Medal for Lincoln: A Photobiography (Clarion, 1987) — wrote over sixty books,” reported the Horn Book in Russell Freedman (1929-2018).

His children’s literature career spanned more than 50 years and he wrote about the evolution of nonfiction standards in a 2014 essay for the Horn Book, Changing Times. Peek:

“Back in the 1950s, the popular Landmark books had no illustrations. None. And while skillfully written by notable authors, those books had no bibliographies, and, heaven forbid, no chapter notes! Today’s nonfiction for kids, abundantly illustrated, meticulously documented, is, I believe, more inviting than ever before, and more authoritative.”

After earning an English degree from the University of California, Berkeley in 1951, Freedman served in U.S. counter intelligence during the Korean War.

Afterward, he returned to San Francisco and became a reporter and editor for the Associated Press before moving to New York to work in advertising.

His first book, Teenagers Who Made History (Holiday House, 1961), was inspired by an article he read in The New York Times about a 16-year-old who invented a Braille typewriter, according to Shannon Maughan’s Obituary: Russell Freedman in Publishers Weekly. 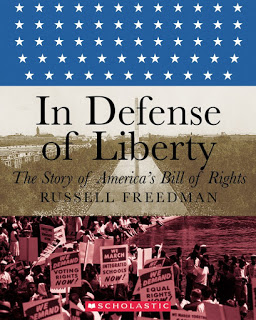 He went on to write more than 60 additional nonfiction books, earning him the Laura Ingalls Wilder Medal in 1998 and the National Humanities Medal in 2007.

In a 2007 interview with Daniel Scheuerman for the National Endowment for the Humanities, Freedman said he considered In Defense of Liberty (Holiday House, 2003) his greatest personal success.

“’What is more important than the Bill of Rights to America?’ he asks. ‘Nothing! And I got to try to convey this information to a new generation.’”

He also called the book one of his biggest challenges.

“’You’re dealing with legalisms, to some extent, and abstractions, and you have to put them into human terms.’”

A memorial service is planned for Oct. 11 in New York City on what would have been his 89th birthday. 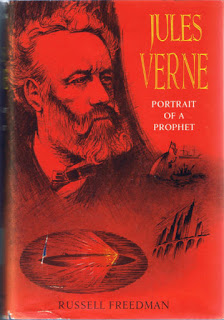 Gayleen: It’s impossible to know how many young readers Russell Freedman inspired during his half-century career, but I know for certain I was one of those readers.

During elementary school I read an old copy of Jules Verne: Portrait of a Prophet (Holiday House, 1965) and remember finding his descriptions of Verne’s adventure stories much more exciting (and accessible) than the actual Verne books.

Though as a fourth grader, I never made the connection that the biographer who led me to the creator of Around the World in 80 Days and Journey to the Center of the Earth was also an author himself.

My conscious appreciation for Russell Freedman began during my first semester at Vermont College when my advisor Jane Kurtz suggested his work as a model for nonfiction.

Since then I’ve read many of his books and continue to be awed by his attention to detail and ability to transport the reader into historic events.