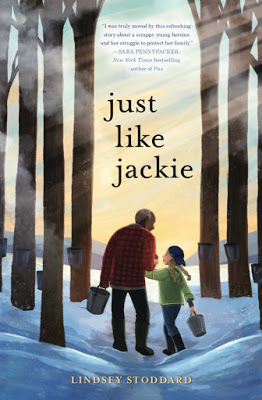 Lindsey Stoddard is a Vermont College of Fine Arts alum and our time there overlapped, so I jumped at the chance to interview her about her debut middle grade novel, Just Like Jackie (HarperCollins, 2018). From the promotional copy:

For as long as Robinson Hart can remember, it’s just been her and Grandpa. He taught her about cars, baseball, and everything else worth knowing. But Grandpa’s memory has been getting bad—so bad that he sometimes can’t even remember Robbie’s name.

She’s sure that she’s making things worse by getting in trouble at school, but she can’t resist using her fists when bullies like Alex Carter make fun of her for not having a mom.

Now she’s stuck in group guidance—and to make things even worse, Alex Carter is there too. There’s no way Robbie’s going to open up about her life to some therapy group, especially not with Alex in the room.


Besides, if she told anyone how forgetful Grandpa’s been getting lately, they’d take her away from him. He’s the only family she has—and it’s up to her to keep them together, no matter what.


I grew up loving reading, and from a very young age it was my dream to be a teacher and to write books. I used to line up my stuffed animals and read out loud, and then I’d write my own stories and try them out on my animal class.

I majored in English at Carleton College and took every creative writing class I could, and continued to be involved in workshops in New York City when I moved to Washington Heights to be that middle school English teacher I dreamed of being when I was reading to my animals.

It wasn’t until I met my first class of students that I knew I wanted to write for kids. I love that middle school age. They are really starting to figure out who they are, and their sense of justice is high— “That’s not fair! That’s messed up! That’s not right!”

They can be moody and defiant and emotional, but all of this makes for excellent questions and discussions and points of view.

I spent 10 years teaching English in that middle school in Washington Heights, and in the middle of those years, I pursued my writing career more purposefully, and received my MFA in Writing for Children and Young Adults from Vermont College of Fine Arts.

Being on that campus, surrounded by such incredible mentors and inspirations, confirmed for me what my students in New York City taught me. I wanted to be a part of this community who writes for kids.


I spent much of my time at VCFA working on my creative thesis, a novel that was inspired by a student of mine.

In fact, most of my writing for kids had been stories I wrote for my students. I wrote a story for Malcolm, and Franmy, and Anthony, and José, and Ilcy.
During my second semester, my advisor, Tim Wynne-Jones, told me that I couldn’t just write for my students and that I’d benefit from tapping into my own stories. That I should try writing for my own ten-year-old self.

Just Like Jackie came from taking the time to reflect on the things that made me feel big emotions when I was young.

First was the time I spent with my own grandpa, who was suffering from Alzheimer’s.

I remembered feeling uncomfortable and sad when he couldn’t finish his own sentences. I didn’t know if I should guess at its end, and finish it for him, pat his hand as if to say it’s okay, or just change the subject. I wondered what it might be like if he had been the person taking care of me, how scary it would be, and how protective I might become.

The second was a time when I felt such rage that, like Robbie, I balled my own fists in anger.

A neighborhood boy swung his whiffle ball bat at my backyard tree and knocked from its branches a perfect robins nest, full of eggs I was watching and waiting to hatch. I remember the eggs splattering on my lawn, and before I knew it my fist connected with his face.

These emotions and memories from my own ten-year-old self, as Tim advised, led to Robbie’s story.


In terms of publishing, how did you navigate the process of finding an agent and, with his or her representation, connecting your manuscript to a publisher?


The first manuscript I submitted to agents was my creative thesis from VCFA. I made a list of middle grade books I loved and admired and thought had a similar writing style to my own.

Then I found the agents of those authors, and, in each query letter, wrote a couple lines about that one special book and how I thought my manuscript might reach the same type of readers.

Though most wanted to read the full manuscript, I was very kindly rejected by every single agent. The comments were similar: my writing was strong, and full of voice, but the story wasn’t for them.

This was when I returned to Tim’s comment about writing for my own ten-year-old self. It was so hard to put that first manuscript in a drawer, and to refer to it as my practice book, but that’s what I had to do to make way for Just Like Jackie.

People say that a writer has been writing her first book her whole life, and that is definitely true of Just Like Jackie. When I finally put the pen to the page, Robbie’s story came easily. It felt honest and right and the whole time I felt like I was writing my way home.

I submitted Just Like Jackie to mostly the same list of agents who had previously rejected my work, and this time I heard many yesses.

My agent, Stephen Barbara’s yes, was the most confident I-love-this-just-as-it-is yes. I met a couple agents face to face and my time with Stephen confirmed what I thought— that his confidence in my book was exactly what I needed going forward. He compiled a list of editors he thought would love Robbie the same way he did, and submitted my manuscript.

There were many yesses, but my editor at HarperCollins, Erica Sussman’s yes, was the most enthusiastic I-cried-on-my-couch-the-whole-way-through-and-have-to-have-this-book yes that I received.

I met several editors face to face and some on the phone and I just loved the way Erica spoke about Just Like Jackie and I immediately felt comfortable with her.

I’m so thankful for Tim’s comment all those years ago at VCFA. He helped me find an authenticity in my writing that I think will connect with readers, and it helped me learn the hard lesson that sometimes a whole book, that took years and years to write and revise, was just practice. Excellent practice.


Just Like Jackie received starred reviews from both Publishers Weekly and Kirkus Reviews. 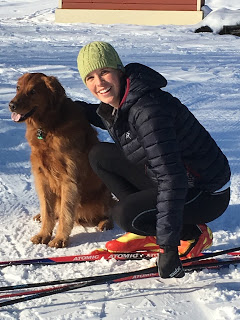 “Stoddard debuts with a quiet but powerful narrative that gently unpacks Alzheimer’s, centers mental health, and moves through the intimate and intense emotional landscape of family—what seems to break one and what can remake it. Validating, heart-rending, and a deft blend of suffering and inspiration,” wrote Kirkus Reviews.

Lindsey Stoddard was born and raised in Vermont, where she loved to play in the snow and ski, learned to boil sap in her grandpa’s surgarhouse, and began her lifelong love of reading.

She always wanted books to be a big part of her life, so when she graduated college she moved to New York City, where she taught middle school English for 10 years.

She loves reading and writing with middle schoolers, hiking on the Appalachian Trail, and Ben and Jerry’s ice cream.

She received her MFA in Writing for Children and Young Adults at Vermont College of Fine Arts.