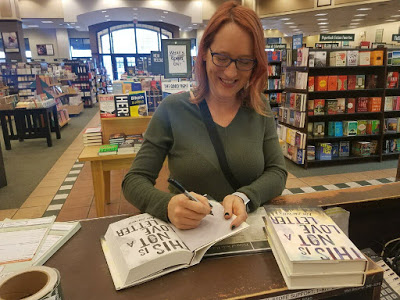 In This Is Not A Love Letter (Hyperion, 2018), Jessie writes her missing boyfriend an account of what they’re doing to find him, entirely in her head. The reason I chose to do it this way is rooted in what happened to me when my friend went missing in high school.

My friend Al stopped by a barbecue in the middle of a run and I talked to him, said he should stay, and he said he’d be back. He never made it home.

I searched through the woods, in the pouring rain, thinking of what I’d tell him when we found him.

In real life, we feared a hate crime, since he was one of the only African-Canadians in our small mill town in Northern British Columbia. Finally, the search was called off, and I returned to school to do finals, talking to him in my head, worrying he was missing them.

For that whole summer, I ran every day, and every time I ran, I imagined him running beside me, grinning at me, making wry comments, or just listening to me talk. 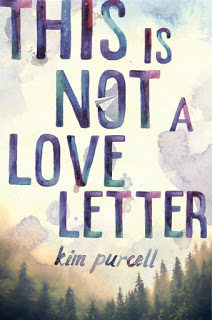 Those runs taught me how to tell this story.

Apparently, talking to people in your head isn’t strange. A lot of people experience this when someone drops out of their life all of a sudden due to a disappearance, death, or a sudden break-up.

It’s jarring. The brain just can’t adjust. For sure, my brain couldn’t adjust. I couldn’t believe that I’d never see him again.

So, I rewrote the book in several short letters, which Jessie wrote at the end of each day as she searched for Chris. The struggle in this rewrite was in figuring out when she’d write the letters.

Then, I thought it could be in journal form, written at various points throughout the day with time stamps, but who’s going to pull out a journal in the middle of a search for her boyfriend?

Finally, I swung back to the way I wrote to my friend, in the moment, in my head. This was the only true way I could tell this story. I rewrote this book from scratch, again, in the present tense. I could interweave Jessie’s moment-to-moment story, and keep the reader in her body, and in her emotional journey. Also, the reader could stay in her thought process when a song or an object would throw her into a memory of Chris or into an ESP communication with him.

I could also incorporate other alternate epistolary forms within the narrative, such as text messages from the friends to one another, old texts from him, an old voicemail message, and one love letter from him that Jessie finds after he’s missing. In this way, the reader gets to peruse the pieces of evidence that give clues to what happened.

In shifting to an alternate epistolary model, my hope was to provide a challenge to the reader and increase the suspense. Because Jessie writes the love letter in her head, the reader is essentially living in her brain, seeing what she hopes to share with Chris when he returns.

The reader very likely sees the answer before Jessie sees it, and this also increases the tension, because the reader is calling to Jessie through the pages, interpreting the evidence.

It turned out this was the only way for me to write this story, and I think that’s when epistolary novels work best, when there’s some underlying emotional reason to write the story in that format.

In the end, you have to write a book for your own heart, and hope it connects to others.

For me, it was a love story to my friend. And I like to think he’s looking down at me, and saying, “Hey, I love you back.” 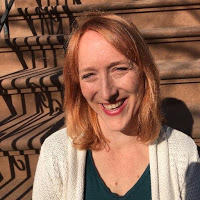 Kirkus Reviews gave This is Not a Love Letter a starred review and wrote, “Purcell handles the nuances of interracial relationships with a remarkably sensitive and observant eye and challenges readers to view racism under a broader category of generalizations.”

She has her MFA in Writing for Children and Young Adults from the Vermont College of Fine Arts.