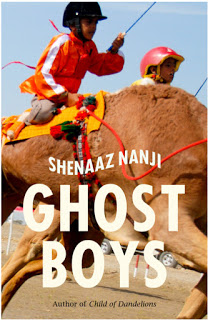 Shenaaz Nanji is the author of Ghost Boys (Mawenzi House Publishers, September 2017). From the promotional copy:

Fifteen-year-old Munna lives with his Ma and sisters in a small town in India.


Determined to end his family’s misfortunes, he is lured into a dream job in the Middle East, only to be sold. He must work at the Sheikh’s camel farm in the desert and train young boys as jockeys in camel races.


The boys, smuggled from poor countries, have lost their families and homes. Munna must starve these boys so that they remain light on the camels’ backs, and he must win the Gold Sword race for the Sheikh.


In despair, he realizes that he is trapped and there is no escape . . .

I grew up in East Africa amidst a fusion of cultures: East Indian, British Colonial, African, and later, American and Canadian.

The multicultural exposure made it difficult for me to raise my children in North America in the 1980s. I was troubled by questions like: Can my children embrace our traditions as well as fit in with their peers? Can they be cool if they are different?

In desperation, I searched the libraries and bookstores for relevant fiction to answer my questions, but came up empty handed. Frustrated, I began to write my own stories for my children. 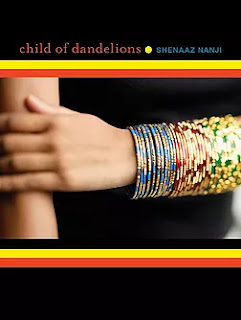 Once, my son commented: But Mom, why are your stories not books?


I replied: Because I am not an author.

He pursued: Why can’t you be an author, Mom?


Hmmm, I thought. I should try, I told myself without knowing zilch about publishing.

So I tried to publish the stories without a smidgen of knowledge on how long the publishing cycle takes. Several years flew by before my stories were published.

Indeed, my children grew up faster than my books did.

I first learned about camel-slave jockeys from my daughter who was researching on human rights topics for Persuasive Speech and Debate. I saw images of young boys of four-to-five years of age in racing body armor and helmets but bare feet, working in the blistering heat of the desert and was horrified.

An eight-year-old jockey who suffered a fall on the racing track with serious abdominal injuries said in a local newspaper:  “I wish there were no camels in this world.”

Another said: “I only remember death was dancing on all sides, we were falling down and the cars following the race were taking away the bodies of those who were killed or injured.”

The words lingered in my mind, often echoing eerily. Like Munna in Ghost Boys, the young camel jockeys became ghosts inside of me, haunting me, refusing to rest until I told their story.

What research did you do to learn more about child slavery?

I went to Middle East three times. I visited a racing track early morning before the sun rose and watched a camel race take place. Photographs were forbidden, but I managed to converse to a few camel trainers brought from Bangladesh and Afghanistan.

I scoured the information in international newspapers about the lives of the camel jockeys and reports by UNICEF. I watched documentary films on camel jockeys in BBC as well as CBC.

Bryant Gumbel on HBO told us about the camel jockeys in The Sports of the Sheikh, in which the British photojournalist, David Higgs and Ansar Burney, a Pakistani human rights crusader, secretly visited several camel camps with a hidden camera.

Their story of young camel-slave jockeys chilled me to the marrow.

That the laws were flouted even after the robots replaced young boys as camel jockeys. In 2005, a
law in the United Arab Emirates prohibited the use of children under the age of 18 as camel jockeys.

But the cover page of Time Magazine, Dec 14, 2011 featured a 35-year-old mother of five, an acid attack survivor, Azim Mai. Her husband allegedly threw acid in her face after she refused to sell their two boys to a man in Dubai to use as camel racers.

I was surprised by the statistics of modern slavery. Modern slavery includes debt bondage, forced marriage, child labor, human trafficking, and forced labor. According to World Map Slavery, more than 29 million people in the world today live in slavery, the size of a nation.


What do you hope readers take away from Ghost Boys?

I hope to raise an awareness of modern day child slavery and the horrors of dowry. I want to offer hope to the readers, that regardless of our inherent weakness or flaws in life, our flip side is strength. The beast is two headed but they share the same heart.

In Ghost Boys, Munna thanks his curse that has turned him into a bad luck brother. He says, “While I hate the curse, it gives me courage. It’s like a two-headed beast in my heart. If I lose it, my courage might go.” Banish the beast and the heroism vanishes.

Writing may be a long journey, but there are ‘ah ha’ magical moments along the way. Writing is the most emotional and personal tasks ever. For me it is a love-hate affair. Writing is that rich, sweet, golden ladhu, Indian sweetmeat that melts in my mouth. If I eat it, I will regret it. But if don’t eat it, I will also regret it. I always profess to my hubby this is the last book I am writing, but then there is another. I believe words have the power to change lives, especially the young minds. Writing will help us understand the strange breed of humanity. It will enrich our lives as well as the lives of the readers.

I believe the next magical thing in the universe after giving birth to babies is giving birth to books. Our stories will last longer than we will. In the end, they are all that will be left.


What would you have done differently? 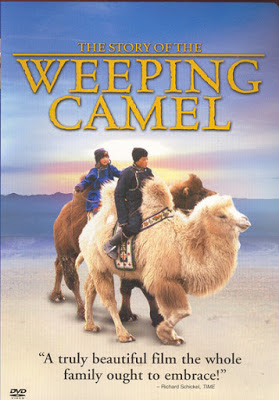 A major mistake was not having a proper outline on paper. Of course, the fuzzy plot of the story was in my head, but after several months of writing, I found to my astonishment, suddenly lost, stuck in the middle-muddle with no road map.

What should happen to Munna in the Ghost Boys after he faces the sandstorm? For months, I’d stare at the half-written story on the computer screen and hastily divert to other tasks such as emails etc.

Thankfully after recalling ‘The Story of the Weeping Camel’ in the Gobi Desert in Mongolia, in which the camel gives birth to a rare white calf and refuses to nurse her baby, I moved on.

I learned the importance of drawing a sketch of the setting where the story takes place. It added a lot of clarity to the plot.

A big thing I learned was humility. After my last novel, Child of Dandelions (Boyds Mills Press, 2008), that garnered a lot of attention, I thought I knew it all. That I could easily whip out the next book.

Every story faces new challenges. I forgot that I was climbing another mountain with different peaks and valleys. The smugness cost me years of confusion and re-learning about writing all over again. Next time around, I hope to start with the basics and with grace. 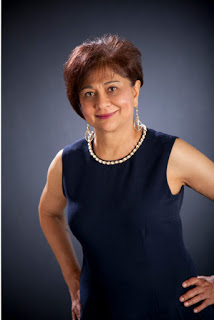 Shenaaz Nanji‘s Child of Dandelions, a novel about the expulsion of Uganda’s Asians, was shortlisted for the 2008 Governor General’s Award for Children’s Literature.

Her other books include:

She holds an MFA from Vermont College and lives in Calgary.