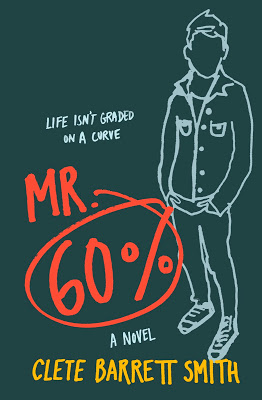 
I heard Clete read the opening chapter several years ago for his graduate reading at Vermont College of Fine Arts. It gave me chills, and I’m so happy the book is now out in the world.

Matt Nolan is the high school drug dealer, deadbeat, and soon-to-be dropout according to everyone at his school. His vice principal is counting down the days until Mr. 60% (aka Matt) finally flunks out and is no longer his problem.


What no one knows is the only reason Matt sells drugs is to take care of his uncle Jack, who is dying of cancer.

Meet Amanda. The overly cheerful social outcast whose optimism makes Matt want to hurl. Stuck as partners during an after-school club (mandatory for Matt), it’s only a matter of time until Amanda discovers Matt’s secret.


But Amanda is used to dealing with heartbreak, and she’s determined to help Matt find a way to give life 100 percent.
What was your initial inspiration for writing this book?

I took a leave of absence from my teaching duties to enroll at the Vermont College of Fine Arts to pursue my dream of writing for young readers.

Shortly after that, my then-wife’s uncle got in touch to let us know that he had been diagnosed with advanced pancreatic cancer and had been given six months to live. We invited him to come and live with us.

This was a man who I adored; he was a talented, funny, friendly, charismatic mess of a guy. And I did not have much previous experience with the process of dying—especially not up close—and as I was at home instead of at work, I became one of his primary caregivers.

The experience fundamentally changed me. My relationship with death had mostly been through stories, where people offer pearls of wisdom on their deathbed and stoically accept their fate.

This is not what I was seeing. This man was furious that he had cancer. He was not “ready” to die and he did not feel like giving anybody any pearls of wisdom. It was messy and scary and heartbreaking.

And when it was over I knew that I had to tell this story, for one reason because it was the book that I wanted to see on the shelves and had not found, and also because writing it helped me find some closure.

At the same time I had been kicking around an idea about a YA book told from the perspective of a high school drug dealer.

I knew some of these kids from my teaching career—they flew under the radar and would never cause any problems with teachers, because getting in trouble would raise red flags and limit access to their teenage clients. I got to know a few of these kids (as much as they would let a teacher get close, anyway) and couldn’t stop wondering about what their lives were like when they left school at the end of the day. I ended up combining the two ideas for Mr. 60%.

The challenges were mostly psychological.

Many of the difficult scenes that happen in Mr. 60% are basically exactly what happened when I was caring for this man. Some of the dialogue is verbatim from real life.
So when I would sit down at my writing desk for the day I knew that I would be reliving some very painful memories in very vivid detail.

I don’t think this book would exist without my experiences in the MFA program at VCFA.

First off, everyone there was encouraging people to “write the book that scares you.”

Well, the idea of this book certainly scared me.

I was used to writing funny, lighthearted middle grade stuff, and even thinking about this book took me way out of my comfort zone.

I was lucky to have a wonderful advisor in my second semester. When I initially met with Uma Krishnaswami, she asked what I would be working on.

It was the first time that I had admitted out loud that I would be tackling this project, and as soon as I opened my mouth I just started bawling. Uma came around the desk, put her arms around me, and told me it was going to be all right. She was so helpful and supportive, not just with the writing, but with the emotional toll of writing the book.

I remember early in the process, I was going to give up and go back to writing lighthearted stuff. It was just too painful to dredge up all of these memories, and I felt very alone at my writing desk.

Well, on the day I was going to give up, Uma called me up. It was rare for advisors to call students, at least for me—this is the only time I can remember it happening in my two years in the program—and she was calling to say that she had found a song that reminded her of the character in my book who had terminal cancer, and she sent me a link to the song.

To be honest, I don’t remember much about the song, as I didn’t really connect with it in the same way. 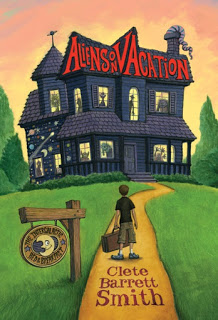 But that phone call made all of the difference. I didn’t feel so alone when I sat down at my writing desk anymore, and I swear I could feel Uma’s arms around me again during the really tough parts of the writing process.

After that, I have never written a book so fast. The bulk of what became the final manuscript was written over three “packets” (which is three months in real time).

With Uma’s support and encouragement, it just sort of came pouring out of me.

How was your approach to writing this book different than your previous work?

My first three novels were for middle grade and they had a first-person POV narrator who was lighthearted and fairly open about discussing the struggles he was facing as he moved from boy to teenager.

So for this one I thought it would be an interesting challenge—and fitting for this particular character—to have a main character that told the reader nothing at all about himself. This is an extension of the fact that he tells the other characters in the book nothing about himself—he has built his walls tall and sturdy.

So I really wanted to use a spare, minimalist approach, where the reader has to infer everything through words and actions.

It’s also a very emotional story, though, although nothing is explained for the reader. I am hoping that the result is emotionally resonant. 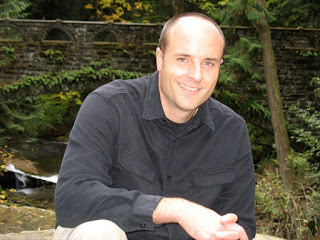 Kirkus Reviews said Mr. 60% “is well-structured, moving quickly between beats but not rushing” and calls Matt “a compelling central character.”

Clete Barrett Smith is the author of the middle-grade Intergalactic Bed & Breakfast series (Disney) (Aliens on Vacation, Alien on a Rampage and Aliens in Disguise), as well as Magic Delivery (Disney, 2014).

A lifelong resident of the Pacific Northwest, Smith taught English, drama, and speech at the high school level while continuing to write.
He holds an MFA in Writing for Children and Young Adults from Vermont College of Fine Arts.