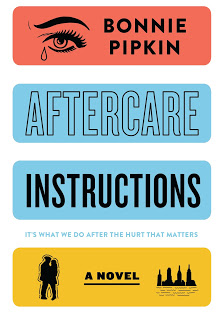 Bonnie Pipkin is the debut author of Aftercare Instructions (Flatiron Books, 2017). From the promotional copy:

“Troubled.” That’s seventeen-year-old Genesis according to her small New Jersey town. She finds refuge and stability in her relationship with her boyfriend, Peter—until he abandons her at a Planned Parenthood clinic during their appointment to terminate an unwanted pregnancy. The betrayal causes Gen to question everything.


As Gen pushes herself forward to find her new identity without Peter, she must also confront her most painful memories. Through the lens of an ongoing four act play within the novel, the fantasy of their undying love unravels line by line, scene by scene.


Digging deeper into her past while exploring the underground theater world of New York City, she rediscovers a long forgotten dream. But it’s when Gen lets go of her history, the one she thinks she knows, that she’s finally able to embrace the complicated, chaotic true story of her life, and take center stage.

What came to me first was a vision of the opening scene: A girl named Genesis would have an abortion, walk out into the waiting room, and find her boyfriend gone. From there, I had no idea where the story would go, but I always knew this was where it started.

It went many different directions in the drafting process—the first round even had a traveling ghost theater troupe!—but that scene was the anchor. Beyond that, I knew I wanted to write about abortion but I never wanted the journey to the choice to be part of the story. We were going to enter the world with the choice made.

I also wanted to tackle the subject without shame. These were the bits and pieces. Then I just had to get to know Genesis in order for the rest to come out.

The worst moment of my publishing journey came while I was revising the novel with my agent. I was full of momentum after finishing my MFA program and signing with an agent right out of the gate, ready to finish the manuscript and put it out into the world.

I read the opening scene for my graduate reading to a tremendous response, and was full of confidence about how edgy and boundary pushing I was going to be. Opening the book with a minute-by-minute abortion scene was going to Blow. People’s. Minds. I told myself this.

Then one day, I received feedback from my agent that she thought we should cut that opening scene and start the story somewhere else. That maybe opening with that scene was a bit too intense for the people sitting around acquisitions tables. That maybe it was a little too much like staring at a car crash. After all, this is one of the most divisive subject matters in this country.

I was shattered by this suggestion. I have a punk rock spirit, and have always thought I should never think about stuff like that when making art. To me, agreeing to cut this scene felt like the first time that I had to make a business decision over an artistic one.

But I see now how I was still in this cloud of overconfidence. I didn’t write for two months after this suggestion. I didn’t know what this book was without that opening scene. My agent assured me that after I made that cut, if the book didn’t feel authentically me, then we could always go back. But I really didn’t know how to do it. I felt like I had come so far and maybe the story wouldn’t actually go anywhere now.

After killing the biggest darling of my life, and basically skinning myself alive, I had to grieve and then I had to heal a bit. But then something amazing happened. Without my dependency on the impact of the opening scene, I had to make the whole damn book live up to that kind of weight. It pushed me to think about the rest of the book and what it needed.

That opening scene was my anchor, but that was also drowning me. I don’t know how my wizard agent, Emily van Beek, saw that, but I’m so grateful she pushed me that way. I revised this manuscript with her for nearly two years before it went on sub (minus the two months I was paralyzed by my own ego. Okay, it might have been three. Or four.).

In an intellectual way, I always knew that I agreed with the notion of killing your darlings. But until I felt this so closely, I didn’t really get it. It’s deep. And it hurts. But what doesn’t kill you makes you stronger, they say.


I recently traveled to Ireland, and upon landing had to fill out a card for immigration. When it asked for my occupation, it was the first time that I allowed myself to put “author” instead of all the million other occupations I’ve identified with and as. But when I handed it to the border agent, I felt a momentary panic that maybe he would tell me I wasn’t really an author. That’s the irrational self-doubting part of my brain on overdrive right there. Like I would have to prove to him that I really was an author or I wouldn’t be allowed entry!

But those moments of uncertainty aside, I’m slowly acclimating to the beast of marketing. Marketing and promotion and social media and all kinds of administrative work that I didn’t anticipate can easily fill up my days. At first, my thinking was, I will take care of all that business in the morning, then have the afternoon free and clear for writing. However, free and clear never really comes once you start the other stuff. I realized that if I don’t do my creative work in the morning, then I can never fully focus on it. The other stuff creeps in. I think I’ll probably always have to strategize to maintain this balance, but for now that seems to work. If anything is going to creep into my afternoon, I would much rather have it be the new story I’m working on! 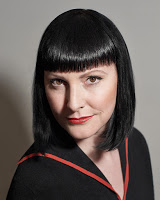 Publishers Weekly described Aftercare Instructions as a “sensitive and big-hearted debut” and Kirkus Reviews wrote: “leads readers on a journey through grief to hope again.”

She has an MFA from Vermont College of Fine Arts, teaches literature courses at Kean University, officiates weddings, and looks after a very cute cat.

One Reply to “New Voice: Bonnie Pipkin on Aftercare Instructions”