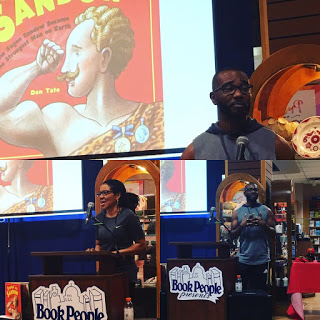 Author-illustrator Don Tate hosted a tremendous, successful book launch for Strong as Sandow: How Eugene Sandow Became The Strongest Man on Earth (Charlesbridge, 2017) Sept. 9 at BookPeople in Austin. From the promotional copy:

As a young man, Müller found himself under the tutelage of a professional body builder. He learned to work out harder. He lifted heavier weights. Over time, he got bigger and stronger. Then he changed his name to Eugen Sandow.

After defeating the strongest of all strongmen in Europe, Eugen Sandow became a super star. Eventually, he become known as “The Strongest Man on Earth.” Everyone wanted to become “as strong as Sandow.”

Inspired by his own experiences in the sport of body-building, Don Tate tells the story of how Eugen Sandow changed the way people think about exercise and physical fitness.

Backmatter includes more information about Sandow, with suggestions for exercise. An author’s note and extensive bibliography are included.

Don’s wife, Tamera Diggs-Tate, welcomed the crowd, introduced him and explained his personal connection to the book’s subject matter–a history of competitive body building. Then Don took the podium, offering the stories behind the stories. From there, the event featured strong-man lifts, a push-ups and popcorn eating competition for kids and a jaw-dropping tie-in cake by Akiko White.