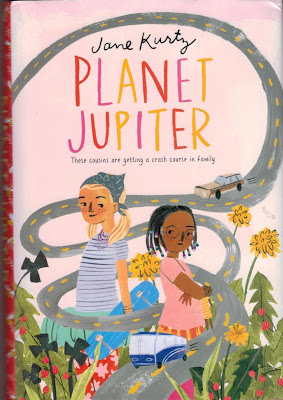 Giving birth to a book is hard. I know. I know. Whine whine whine. Anyway, labor pains are almost over. The new middle grade novel is almost out in the world.

On the verge of my book’s birthday, I returned to the Portland school where my brother and fellow author, Chris Kurtz, was teaching third grade the year I was revising Planet Jupiter (Greenwillow, 2017) —and where I got to read the whole manuscript, chapter by chapter, week after week, to those third graders.

As I struggled to understand my own story and its implications, we talked about Jupiter, my busking, kick-ass protagonist and how she seemed to confident and bold and in charge, but how she was desperately missing her dad (while claiming she wasn’t).

We discussed the stuff that was going to bring her down–her adopted Ethiopian cousin and her new, quirky Portland neighborhood and what it costs us when we flex our muscles and boast that “a rolling stone gathers no moss.” We sang. My brother and his students even made up a song about Portland bridges for my book.

This month, when I returned to the school, I showed the students a picture of me interviewing a girl from Chris Kurtz’s classroom the year before I read to them. She came up to me at a reading appreciation night and made me laugh by the way she talked about being a twin. I asked her if I could interview her for the middle grade novel I was writing—and lo and behold it happened.

“So,” I said. “I was working hard to write my first draft when you all were in second grade. And now you’re in fifth grade!”

And honestly I also love it that the craft is so demanding. That’s one reason I teach at Vermont
College of Fine Arts MFA in Children’s and YA literature: I want to be a student of the craft of writing for my whole life, constantly filling myself up with new ways to think about writing and reading and what it means to tell a compelling and zingy story.

A few years ago at a VCFA residency, I mentioned in a lecture that I was thinking about creating some ready-to-read books (something I’ve dabbled in for two U.S. publishers) for Ethiopian kids.

I learned to read in Ethiopia. I’ve helped start an NGO that has been exploring the question of what it means to have a “reading culture” and how readers and writers can support each other around the globe.

Now Ethiopians are starting to write children’s books. But this easy reader category is its own beast. I haven’t seen those in Ethiopia yet.

After my lecture, I sat with Suma Subramariam, one of my VCFA students, who emigrated from India and supports a school there, at a picnic table. She encouraged me to be more specific.

I told her I knew I didn’t want to commit to production and distribution. I only wanted to see if I could create colorful, appealing, culturally appropriate, local language books that would maybe inspire some Ethiopian artists and writers to try their hand at this particular type of book—one that seems simple but isn’t, one that is a first bridge to reading. Otherwise, I was pretty vague. 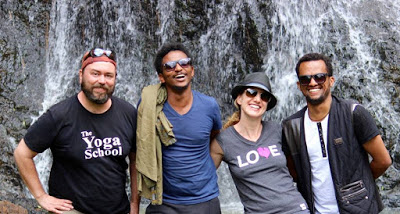 We went off the grid to the remote part of Ethiopia where I have my best childhood memories.

When we returned to Addis Ababa, we experimented with a bookmaking day.

The Ethiopian artists read aloud a couple of stories that volunteers had helped translate into Amharic, one of Ethiopia’s languages. Ethiopian and American kids sat at a table and drew and painted.

One of the American artists took the work done that day, scanned it, and showed me what a book could look like: 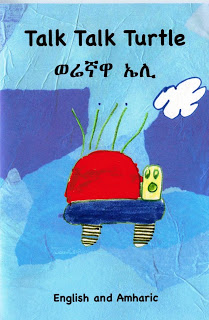 When we got home, my sister and I tried more simple stories, most of them inspired by Ethiopian terets or wise sayings like, “When spiders unite, they can stop a lion.” 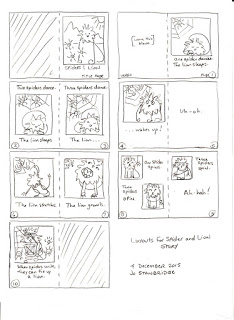 An illustrator friend did thumbnails to show how illustrators start their work. 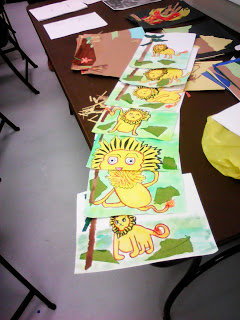 Then I organized another bookmaking day in Portland, Oregon, where I live and where Cecile—who was about to start middle school—studied those thumbnails and created most of the art for a second book. 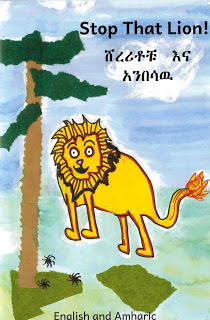 Figuring out every step for our first ten Ready Set Go Books has also been haaaaard.

I’m a volunteer, after all, and so is almost everyone else who’s participated. I’ve had to learn about illustration and page turns and layout and digital design.

And then there’s the question of who will handle production and distribution. Last month, several NGOs paid a small Portland printer to print up 900 copies in three different languages and carried them to rural Ethiopia.

Liz McGovern, Executive Director of WEEMA International said, “I can’t tell you how much the kids absolutely LOVED the books! I have never in my life seen kids so engrossed and so determined to read. It was such a beautiful thing!”

Author Edith Wharton said that to be a writer is to dream an eagle and give birth to a hummingbird. Who knew that something as tiny as a hummingbird would cause such despair and exasperation and make me feel—at times—like such a failure? And yet…

There’s power in creating something that captivates another human.

When I read Charlotte’s Web (by E.B. White, illustrated by Garth Williams, Harper & Brothers, 1952) to my brother, he cried, and the tween that I was got it.

Now, it moved me to hear that even two years later, those students remembered how much Jupiter wants her dad back, how hard it is for her to quit travelin’ on, to be vulnerable, to even sit still long enough for a little moss to grow.

What else is there?

Planet Jupiter releases tomorrow from Greenwillow Books, a division of HarperCollins. Publishers Weekly said Planet Jupiter had “a playful yet introspective narrative” and called it an “engaging, empathic story” with “a host of quirky and appealing supporting characters.”


Kirkus Reviews described it as “a solid middle-grade family story” with vivid characters and fascinating urban village….holding readers’ interest throughout.”

Jane Kurtz was born in Portland, Oregon, but when she was two years old, her parents moved to Ethiopia. Jane grew up in Maji, a small town in the southwest corner of the country.

Since there were no televisions, radios, or movies, her memories are of climbing mountains, wading in rivers by the waterfalls, listening to stories, and making up her own stories, which she and her sisters acted out for days at a time. When she was in fourth grade, she went to boarding school in Addis Ababa.

By the time Jane came back to the United States for college, she felt there was no way to talk about her childhood home to people here. It took nearly 20 years to finally find a way – through her children’s books. Now she often speaks in schools and at conferences, sharing memories from her own childhood and bringing in things for the children to touch and taste and see and smell and hear from Ethiopia.

She is also a co-founder and member of the board of Ethiopia Reads that works to bring books and literacy to the children in Ethiopia. She is a faculty member at Vermont College of Fine Arts in the Writing for Children and Young Adults MFA program, and the author of more than 30 books for young readers.