One of the most vital aspects of timeless writing is voice. Every serious reader, every writer has (or must develop), a strong sense of what voice is. Yet, like time, voice eludes definition.

Of course, I’m going to try and define it. To me, voice is the promise of the first page – the texture of the writing. It’s like the background music in a movie – or the wash an artist lays down to prepare the painting – something that isn’t entirely visible and yet pervades the creation.

What’s the best way to develop your own voice?

Here are three tips I hope will help.

1. Read, read, read the voices of others. Immersing yourself in books with rich voices will help you hone your own.

While I don’t for a mini-second suggest that any writer try to copy another writer’s voice – I do recommend, strongly, that every writer read as much as is humanly possible.

The best way to get a feel for voice and to develop your own is to tune in to the music of the written word – by reading writers with strong voices.

Here are some books written in powerful voices that I highly recommend (and, as with all lists, I’m sure I’ll leave out some favorites, but these wonderful books for young people come to mind at the moment):

2. Experiment with sentences and paragraphs, if not entire stories.

Each of your characters has a different voice. Unless the novel is written from multiple points of view, however, you usually spend most of your time narrating in the voice that, most likely, comes closest to your own.

But by briefly experimenting with telling the story in another’s tone and seeing the story through another’s voice, you may be able to more clearly define the narrator’s voice that you naturally gravitate toward.

If you are writing close third or first person point of view, try switching bodies.

If you tend to write long, luxurious sentences, try writing a paragraph with short sentences and sentence fragments. And the other way around.

My third novel, A Time To Dance (Nancy Paulsen, 2014) is written in lean spare prose. I learned a great deal by journeying from one style to another – and I love both, I’ll admit.

I also love the in-between, which is where, I think, my debut novel, Climbing The Stairs (G.P. Putnam, 2008) fits.

3. Respect your heart, not just your head.

I was an oceanographer. Now I’m a writer. I can attest to the fact that not even scientists are always objective.

The field of literature is largely if not entirely subjective. Thus, it’s only natural that we often subjugate our own responses to a piece in favor of revered reviewers’ opinions.

Yet if you wish to carve your own unique niche, you must let yourself love whatever you love.

There’s no shame in loving a book that has been deemed ridiculous or at least one that hasn’t received the attention you think it deserves.
It’s important to seek out such books, books that haven’t got a lot of hype, and asking yourself whether you think they deserved more (or less).
It’s also important to question and pause and discover which books you adore, deep inside, regardless of whether they won acclaim and awards or not.

When you discover these lesser known books and less celebrated authors, you begin to celebrate your own opinions. And as you grow comfortable with your individual taste, your confidence as a writer also grows.

You start respecting your ideas, your sense of strength. And you must realize what you truly love (regardless of what the world says you should love) if you wish to write in a voice that is powerful – which is to say, a voice that is uniquely your own. 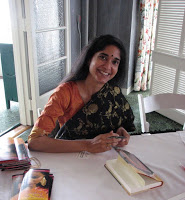 Padma Venkatraman is the author of three novels, which together garnered 12 starred reviews, and were included in over 50 shortlists.

In addition, her books have won several awards (such as the Paterson Prize, the South Asia Book Award, the Julia Ward Howe Award, and the ASTAL RI Book of the year award), and received many honors, including ALA notable, ALA BBYA, Booklist BBYA, Kirkus BBYA, NYPL Book for the Teen Age, Bank Street Best Book amd CCBC Notable.
She has spoken and provided workshops and keynote addresses at national and international conferences and festivals.