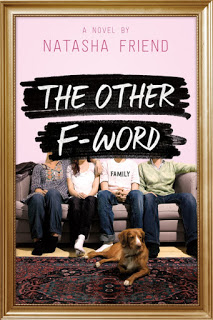 The Changing Face of Family by Natasha Friend from CBC Diversity. Peek: “The traditional definition of family as a married mother and father and their children living under the same roof is woefully outdated, not to mention exclusionary.”

A New Voice in Kid’s Books by Melanie Kletter from Time For Kids Magazine. Peek: (Hena Khan) “….I had heard of resistance to mosques being built in communities, and some vandalism at mosques. It was an important theme that I wanted to address. But I didn’t want the book to be only about that. I wanted a character that readers could relate to and get to know and love.”

While We’re On the Subject of Shame by Gail Gauthier from Original Content. Peek: “We want to feel good now. We want to avoid what’s making us feel bad (being ashamed of not working harder and longer, for instance), and we want to avoid it right away. Which usually means doing something easier and more fun than staying on task with our work.”

Wrap It Up by Dave King from Writer UnBoxed. Peek: “If it feels at all contrived, your readers will lose their suspension of disbelief.  This is most critical with your ending.”

Trees, Forests, and Human Myopia by Uma Krishnaswami from Writing With a Broken Tusk. Peek: “Trees support one another. Some are bullies and others are loners. They have friends; they feel loneliness and pain. They communicate through networks of roots. It’s a compelling argument to rethink how we have been looking at nature for over a century….”

Dedicated Middle School Collections in the Public Library: A New Trend? by Christina Keasler from School Library Journal. Peek: “Many librarians now see the importance of providing safe places that are a haven for students in those formative years after elementary school but before high school.”

Women Write About Family, Men Write About War by Andrew Piper and Richard Jean So from New Republic. Peek: “In the world of writing, gender bias has come to be seen as particularly entrenched, and in 2009, VIDA…began what they called ‘the count.’ The results…Men appeared 66 percent more often in The New York Times Book Review.”

Two Booksellers Set Date for Inaugural Texas Bookstore Day by Ed Nawotka from Publishers Weekly. Peek: “Texas is increasingly becoming more relevant to the national bookselling scene, and several independent bookstores are slated to open in the state this summer….Interabang Books in Dallas…. and a second branch of Deep Vellum Books in Grapevine.”

On SCBWI, Advice for Authors and Illustrators by Guiseppe Castellano from #ARTTIPS. Peek: “If you think SCBWI is just a bunch of grandparents painting bunnies, you are sorely mistaken. Attendees at SCBWI conferences are comprised of authors and illustrators of every talent level at almost every point of a career.” 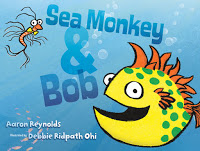 How to Support An Author or Illustrator’s Book If You Can’t Afford to Buy It by Debbie Ridpath Ohi from Inkygirl. Peek: “Post a photo of the book in the wild….Make your post more personal by taking a selfie of you holding the author’s book, or another reader with the book — photos with people in them always get more Like-love.”

Congratulations to the Finalists for the SEE-It Graphic Novel Award from EBSCO and the Graphic Novel Committee of the Children’s Book Council!

Cynthia is currently on deadline, polishing her contemporary realistic YA manuscript for Candlewick. It is tentatively scheduled for release in fall 2018.
Cynsational Events
Cynthia is a faculty member for the Highlights Foundation Workshop: The Joke’s On You! The Scoop on Humor for MG and YA writers, Oct. 12 – 15. She will teach with author Uma Krishnaswami, writer-poetic-comedian Sean Petrie and Curtis Brown Ltd. agents Ginger Knowlton and Elizabeth Harding. Note: this program is: (a) a rare opportunity to gain insights from top writing teachers and Curtis Brown vice presidents: (b) both for comedy writers and those writing more serious works that include some comic relief. 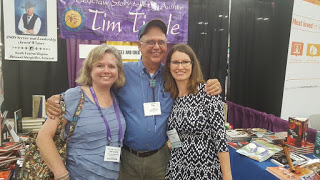 I made a quick trip to the Texas Library Association conference yesterday.

It was far too short, but I had the chance to say hello to a few friends I hadn’t seen in a while, including my agent mates, Tim Tingle and Jessica Lee Anderson. We’re all represented by Andrea Cascardi of Transatlantic Agency.

I know I’m going to be up late reading the advance copy of Jessica’s Uncertain Summer (CBAY Books, Sept. 2017) – it’s about searching for Bigfoot….Tim’s story in Flying Lessons & Other Stories (Crown, 2017) was “Choctaw Bigfoot, Midnight in the Mountains.” I’m beginning to feel a little Sasquatch peer pressure here.