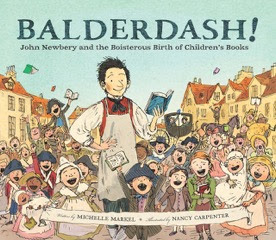 Each January the kidlit community celebrates the Newbery Medal and Honor Books awarded by the Association of Library Service to Children, a division of the American Library Association. Some even have gatherings to watch the webcast of the awards presentation, but do we know about the man the award was named for?

Why were you drawn to the story of John Newbery?

He wanted to spread knowledge, encourage reading, and offer kids informative and delightful books. Me too!

Newbery’s first publication for children, A Little Pretty Pocket Book, had letters from Jack the Giant Killer, and was sold with a ball or pincushion. A book and a toy- in 1744! That was forward thinking.

In those days, children’s literature consisted mostly of fables and grim texts on manners or religion (think: New England Primer, “While youth do cheer, death may be near”).

Can you tell us about your research?

The highlight was checking out Newbery’s antique little books at UCLA’s Special Collections Library. It was like holding the crown jewels!

For details about the setting, and printing presses in particular, I looked at 18th century paintings and illustrations. I read novels, primers, books of manners, and collections of street cries- this gave me a feeling for the language of that era.

An exhibit on Samuel Johnson (one of Newbery’s acquaintances) at the Huntington Library was helpful too.

Was there anything you learned that surprised you?

Newbery was a clever advertiser. Some of his publications for children cross reference each other. So Woglog the Giant, who is a villain in Lilliputian Magazine, later changes his ways and shows up in Fables in Verse, where he visits a bookshop to read some of Newbery’s little books.

I was also surprised by the kid appeal in The History of Little Goody Two Shoes. One of my favorite characters is Ralph the Raven, who is rescued by Little Goody, then taught to speak and spell. He perches on the heroine’s arm and recites poems.

Do you typically visualize the illustrations for your picture books? What about this one?

I may have a general notion about the style, but the editors and art directors are far more talented at choosing illustrators than I am (my writing students are appalled when I tell them this).

For Balderdash- I envisioned old timey artwork, and I think Nancy Carpenter nailed it. Her pen and ink artwork captures the playfulness of the text, and adds lots of treats for the kids to discover.

They might get a sense of how culture changes over time, and how trailblazers like Newbery and one of his influences- John Locke- advance new ideas.

I hope young readers will understand how much books were loved and treasured in the 18th century- and I hope that’s contagious.

Do you have any tips for nonfiction writers?

1. At some point the research can become overwhelming- you can’t see the forest for the trees. There are so many delicious facts- how to decide which to include?

That’s when it helps to revisit a clean, concisely written nonfiction book (one of my favorites is Diego by Jonah Winter, illustrated by Jeanette Winter (Alfred A. Knopf, 1991).

2. Remember the age of your audience.

Pick a subject you deeply believe in- and that young people can relate to. Then blow their minds. Pour some love into the story – No holding back! 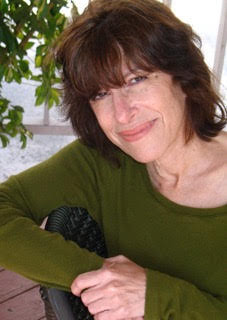 Michelle Markel is the author of many books for young readers, including Brave Girl: Clara and the Shirtwaist Makers’ Strike of 1909, illustrated by Melissa Sweet (Balzer & Bray, 2013), an Orbis Pictus Honor Book for 2014 that also received the Flora Stieglitz Straus Award for Nonfiction from Bank Street.

Balderdash! is a Junior Library Guild selection for 2017.

It also received a starred review from Publisher’s Weekly. Peek: “…Markel’s enthusiastic narration pays its own homage to Newbery’s belief that children should have ‘delightful books of their own.’

A teacher’s guide for Balderdash! is available from Chronicle Books.

Michelle lives in West Hills, California and is a founding member of The Children’s Authors Network. She teaches classes in writing for young people through the UCLA Extension’s Writer’s Program.