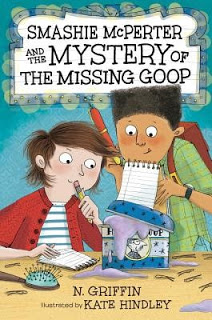 N. Griffin is the author of Smashie McPerter and the Mystery of the Missing Goop, illustrated by Kate Hindley (Candlewick, 2016). The cheerful middle grade mystery is the second in a series featuring a diverse pair of clever student detectives.

My favorite thing about being an author is that I get to spend great hanks of time in my pajamas.
I have discussed this before elsewhere, but I do think it’s worth mentioning again that I always wear complete suits that make me feel like I am Lucy Ricardo.

I think pajamas are one of the great gifts of civilization and rue the day the hostess pajama fell out of fashion.

The other part about being an author I love is that I get to think up people and then spend great hanks of time with them (in my pajamas).

I always feel so much love toward my characters, even the ones that are tough to like, and that makes me feel lucky.

Generally I write in the early early (and I mean early, like four) hours of the morning because that is when my body insists on waking up and subsequently that is when there is coffee a’brewing.

I always wake up ready and clearheaded and in a good mood, so that’s the best time for me to be productive.

On a good day, and I mean a really good one, when the writing is going well and the good coffee cup is clean and ready to use and I feel a song in my heart, I’ll write all day.

On a bad day, I will poke at the keyboard with one finger in a maddish, desultory way and give up after an hour.

I firmly believe you have to give it an hour.
I have a wonderful study to write in but usually wind up crouched on the floor on the living room with dogs walking all over my papers and keyboard.

Somehow that spot tricks me into writing better than the quiet of the study.  Though I love my study. 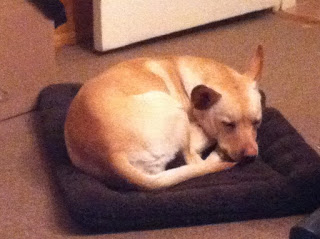 I surely can! It’s called Smashie McPerter and the Mystery of the Missing Goop and it came out in December with Candlewick Press. 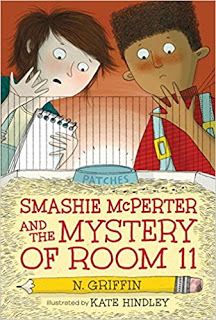 SMcPatMotMG is the sequel to Smashie McPerter and the Mystery of Room 11 (Candlewick, 2015). A tale of third-grade sleuthery in which the hectic, kind-hearted Smashie and her level-headed, intelligent best friend, Dontel, work together to solve the mystery of their missing class pet.

In this sequel (you don’t have to have read the first one to enjoy the second), Smashie and Dontel are in hot pursuit of a thief who is taking their special hair goop—goop that is integral to the Third Grade Hair Extravaganza and Musicale their class is putting on.

This Goop lengthens and molds the hair into the wild styles they need for the show and even as they investigate the disappearance of the goop, Smashie and Dontel are hard at work choreographing sixties go-go dances to go along with the numbers in the musicale. So they have a lot on their plates.

I got the idea for the book from lots of places.

I always knew I wanted to do a book with hairstyles in it because haircutting has usurped flower-selling as my fantasy occupation when writing is not going well for me.

And it was also partly inspired by a hair guy I used to go to who was just terrible. I came home after every cut looking like he’d chewed my hair off in chunks with his own teeth. But he told great stories while he hacked at my head so I kept going. For years.

And it turned out to be worth it because I gave those bad haircutting skills to the mother of Charlene. Charlene herself is one of the characters at the forefront of the story because she helped her mother invent the wondrous goop the class needs for the show. 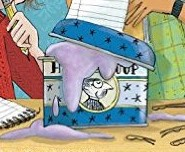 Also I wanted to do a book that would involve code-cracking (there is code-cracking in the book, too. It is a very packed book) and thought it would be hilarious to pair that thinkiness with sixties go-go dancing.

I love writing mysteries because the structure of them is so clear and that helps me as a writer because plotting is such a big challenge for me. Also I love mysteries and clues and sleuthing and truths being unveiled at the end. It is a very satisfying genre. I like to think I am preparing the next generation for Nero Wolfe (the oldest ones in that series. Not the later ones where Archie becomes sort of womanizy).

You’ve written for both YA and MG – were there any challenges in shifting to write for younger readers?

I had so much fun writing Smashie and found it worlds easier than writing YA, probably because the Smashie books, while they have their sticky situations, are in the main very cheerful and my YA tends to be less so.

Smashie is a bit less taxing on the soul.

Craft challenges abound. In mysteries, anyway, once you’ve set your sleuths up to be in a particular third grade class, suspects become limited unless you take that class places where there are other people (that was a hint about the forthcoming third Smashie book!)

But the benefits far outweigh any plot finagling that needs to happen because I love Room 11 and spending time with those children and their wonderful teacher, Ms. Early. So I can get right into the writing and I know how everyone will react to things and that part is the easy part of writing, which is good that there is an easy part since everything else about writing is so challenging for me!


Can we look forward to more books in the Smashie series?

Yes, indeed! As I said above, there is a third one coming and, while I tend to keep pretty mum about upcoming projects, I will say there is a rocket in it.

Kirkus said Smashie McPerter and the Mystery of the Missing Goop “subtly attacks stereotypes with her (Griffin’s) multi-ethnic group of hugely likable kids. Dontel’s dad is a dentist, and a Latina student’s mom is a patent attorney – a fact that also figures into the plot.”

N. Griffin is the author of The Whole Stupid Way We Are (Atheneum, 2013), for which she was named one of Publishers Weekly’s Flying Start Authors of 2013, as well as the Smashie McPerter series from Candlewick.

She received her MFA from Vermont College of Fine Arts and lives outside of Boston with a crew of canine companions.