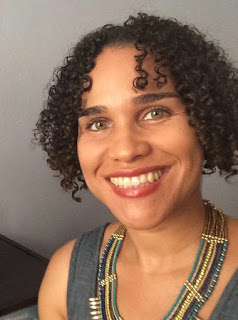 Zetta Elliott‘s last Cynsations interview was in 2009. Since then she’s published more than two dozen

books and nearly twice as many essays, like Decolonizing the Imagination for The Horn Book (March 2010).

I’ve been thinking a lot about the lasting effects of Imperialism and how it influences both society and literature. When I learned Zetta’s latest MG novel explores those themes – and includes castles and ghosts – I had to know more!


What was your initial inspiration for writing this book?

I love period dramas, but people of color are usually erased or marginalized even though we’ve always been present in – and contributed to – the eras being depicted.

I also wanted to address the issue of harm and reparations in a way that children could understand; I grew up in a “former” British colony (Canada) and so consumed a fair amount of literature and television programming that in no way reflected my own reality. 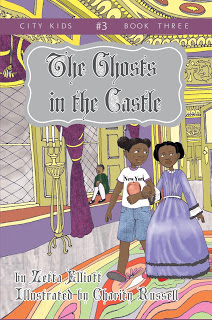 I’ve written elsewhere about my struggle to “decolonize” my imagination, and The Ghosts in the Castle (Rosetta Press, 2017) is really my attempt to heal some of the wounds caused by the erasure or misrepresentation of Black children.

It’s the book I wish I’d had as a child: a Black princess, a Black prince, and a haunted castle in England. All that’s missing is the dragon!

It’s also the book I wish my father had had when his Caribbean grandmother forced him to stay indoors and read Alice in Wonderland (which he loathed). That experience turned him off fiction for the rest of this life, and today I regularly meet kids of color who aren’t enthusiastic about reading because there aren’t enough books where they get to have magical adventures. This book is for them.


What were the challenges in bringing the text to life?

I’ve written several historical fantasy novels and the biggest challenge is always balancing fact and fiction. The research process can be time-consuming and rather tedious – especially when I know that I’ll probably only use 10 to 15 percent of it in the book. There’s nothing worse than info-dumping, no matter how interesting some facts may be, they only belong if they somehow advance the narrative or help with world-building.

Because I write speculative fiction, I also allow myself to bend history sometimes. For me, the story always comes first. 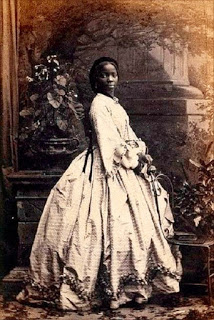 The internet made researching this book a lot easier. In 2015, I came across some elegant antique photographs of Sarah Forbes Bonetta (1843- Aug. 15, 1880) on Facebook; that led me to At Her Majesty’s Request: An African Princess in Victorian England by Walter Dean Myers (Scholastic, 1999).

I decided to write a story about Sarah (Myers’ book is nonfiction) and for some reason thought she had spent time at Kensington Palace.

When I finally got my facts straight, I found out that another African child had a connection to Queen Victoria. Prince Alemayehu of Ethiopia (April 23, 1861 – Nov. 14, 1879) is actually buried at St. George’s Chapel, and so I headed to London in October 2015 with the intention of visiting Windsor Castle. I went back in February 2016, and slowly the story began to take shape.

Photography isn’t allowed in the castle or chapel, so I took notes, but also reached out to the Windsor Castle library and a very kind archivist there answered some questions that helped a lot. 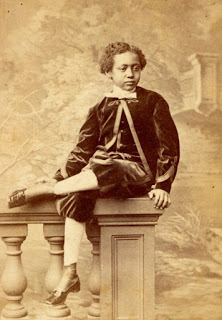 A neighbor with expertise in Ethiopian history and culture assured me I’d respectfully and accurately represented the prince’s sad story.

I wrote the book off and on over a year, but tried to honor the earliest chapters I’d written back in 2015. Initially, the two children didn’t get along, and when I reread those passages months later, I wondered whether I should change that. But I’m happy with the book’s resolution and their reconciliation.

I try to honor my initial impulses when I’m writing a book because they’re largely intuitive and not informed (limited) by subsequent research.


As an author/scholar how do your various roles inform one another? (Did this influence your decision to write this story for a MG audience?)

I wear a lot of different hats, but I definitely think about how the books I write could be used to start a conversation between kids and adults at home or in the classroom. My dissertation was on literary representations of lynching, so I’ve spent a fair amount of time thinking about trauma and its impact on Black people. I feel quite strongly that I have a responsibility to “teach the youth the truth” and that’s one reason I self-publish.

The Ghosts in the Castle is a book that likely would not appeal to corporate publishers and neither would Billie’s Blues (Rosetta Press, 2015), which gives lynching as one of the reasons for the Great Migration of African Americans out of the South. When I told my college students that I wanted to write a picture book about lynching, they were shocked. Yet many of those same students were furious that they’d never learned about lynching until they reached college. Children are taught about the Holocaust and some kids learn about slavery in the U.S., but many textbooks are sanitized or decontextualized.
There’s a real fear within the dominant group that if children know the ugly truth about the country’s history, they’ll become embittered and “unmanageable” (to borrow a term from Frederick Douglass). But I think young people are empowered by the truth, and so my challenge is to make events and figures from the past relevant to contemporary kids who think Harry Potter novels have taught them all they need to know about England.
You have both self-published and traditionally trade published books. What are the challenges and benefits of self-publishing?

The benefits include telling my story my own way without needing the approval of someone who’s not from my community and not familiar with my culture(s). I’d already collaborated on two books with Charity Russell and so immediately went to her when I was looking for an illustrator. She’s brilliant and put in the time it took to get all the details right.

Last summer I wrote a book that would have been the third in the City Kids Series, except my agent – against all odds – managed to sell it to Random House. I won’t have a final say over the illustrator that’s selected and I can’t do anything about the Fall 2018 publication date.

But that sale prompted me to finish The Ghosts in the Castle. I wrote a thousand words a day for most of November until the book wrapped up at 25,000 words. Charity whipped out the illustrations and we got the book ready for publication in about two months.

I was at the Brooklyn Public Library last month and a youth librarian said, “Wait – you’re Zetta Elliott? A parent came in the other day asking for more easy readers by you.”

That parent and her child don’t matter to corporate publishers who need to sell thousands of books, but I can respond to that need within my community. I can act on the sense of urgency that I feel, and that kind of autonomy is really empowering. I know some folks will complain that I’m not following the conventions of other series: I don’t use the same protagonists in every book, and the reading level and length vary, but I’m not trying to mimic anyone else. To me, what connects the three books is the way they blend Black history with Black magic. I subvert some conventions and preserve others in a way that reflects the rupture and continuity that defines the African diaspora.
The challenge now, of course, is that most review outlets (including bloggers) won’t accept self-published books. So I have to rely on social media to get the word out.
Cynthia has supported me as a hybrid author from the very beginning and so I wasn’t afraid to approach Cynsations. But when I surveyed blogs that focus on middle grade fiction, most were closed to indie authors. So the marginalization and exclusion I’m writing about in my novels plays out in real life, too. But I’ve connected with some folks in the U.K. and they’re not snobbish about self-published books, so I’m hopeful that my book will find a home!