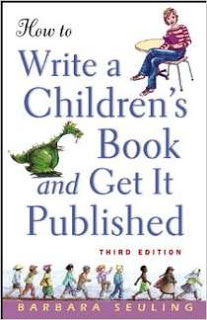 “As author and/or illustrator of her own books, Barbara became a featured speaker at many educational and writers’ conferences and served for many years on the Society of Children’s Book Writers & Illustrators‘ Board of Advisors. She taught writing at Bank Street College and at The Writer’s Voice in New York City before establishing The Manuscript Workshop in Vermont…”

From SCBWI: “One of the SCBWI’s earliest members her sense of humor shone through in the many books she both authored and illustrated. Two of her more popular series were her Robert books, and her wildly successful Freaky Fact series, including Elephants Can’t Jump and Other Freaky Facts About Animals (Dutton, 1985).”

Obituary: Barbara Seuling by Shannon Maughan from Publishers Weekly. Peek: “Outside of her own children’s book projects, Seuling used her extensive publishing experience to lead small private writing workshops. Her adult nonfiction title How to Write a Children’s Book and Get It Published (Wiley, 2004), first released in 1984, was considered a key read for aspiring authors and is currently in its third edition.”

With Thanks to an Unforgettable Teaching Author & Mentor by Esther Hershenhorn from Teaching Authors. Peek: “Simply put, Barbara Seuling respected each of her writer’s capacity to become, including this writer, and for that I remain forever grateful. She held the bar High, because we write for children.”

In 1995, when I decided to begin writing for young readers, I was living in downtown Chicago. I didn’t know anyone in the business. I’d never heard of SCBWI.

I walked to a bookstore on Michigan Avenue, to a shelf of writing craft and publishing information books in the basement. I pulled a dozen or so titles, sat down on the floor and began looking through them. I bought two or three. Barbara’s (Scribner, 1991) was the one that most clicked.

I read it cover-to-cover, highlighter in hand, and then I re-read it. I learned from the book, formed a plan for moving forward with the dream that would become my life’s work.

Thank you, Barbara, for helping me take the first steps of this journey.

One Reply to “In Memory: Barbara Seuling”