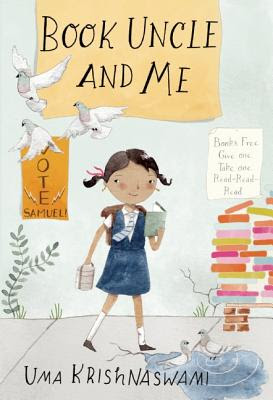 Congratulations to fellow Vermont College of Fine Arts faculty member Uma Krishnaswami on the release of Book Uncle and Me, illustrated by Julianna Swaney (Groundwood, 2016)! Note: so far, the book has received starred reviews from School Library Journal and Kirkus Reviews. From the promotional copy:

Every day, nine-year-old Yasmin borrows a book from Book Uncle, a retired teacher who has set up a free lending library next to her apartment building. But when the mayor tries to shut down the rickety bookstand, Yasmin has to take her nose out of her book and do something.

But what can she do? The local elections are coming up but she’s just a kid. She can’t even vote!

Still, Yasmin has friends — her best friend, Reeni, and Anil, who even has a black belt in karate. And she has grownup family and neighbors who, no matter how preoccupied they are, care about what goes on in their community.

Then Yasmin remembers a story that Book Uncle selected for her. It’s an old folktale about a flock of doves trapped in a hunter’s net. The birds realize that if they all flap their wings at the same time, they can lift the net and fly to safety, where they seek the help of a friendly mole who chews a hole in the net and sets them free.

And so the children get to work, launching a campaign to make sure the voices of the community are heard.

An energetic, funny and quirky story that explores the themes of community activism, friendship, and the love of books. 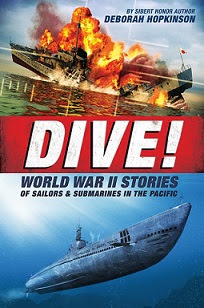 Author Interview: Deborah Hopkinson by Megan Smith from ALSC Blog. Peek: “There were many stories I could have told of other sailors and submarines, but I feel the ones featured help convey what it was like for the young men who went to war in the Silent Service.”

Picture This Diversity Inforgraphic: Follow Up from Sarah Park. Peek: “Since September 14, the blog post has had over 36,000 views; my initial tweet made over 17,000 impressions; my Facebook post was shared over 10,000 times…” See also A Joyful Diversity Collection by Elizabeth Bluemle from Publishers Weekly.

Missing From the Shelves: Book Challenges and a Lack of Diversity in Children’s Literature, a dedicated issue from PEN America. Peek: “…an examination of current patterns of challenges to children’s books reveals that a large portion relate to children’s and young adult books that are either authored by or are about people of color, LGBTQ people, and/or disabled people (referred to in this report as ‘diverse books’)…” See also School Library Journal on Self-Censorship.

Magazine Credits & Book Submissions? by Deborah Halverson from Dear Editor. Peek: “If you’re a debut novelist, you can stand to cite evidence of your chops and professionalism.”

10 Tips for Writing Through Family Stress by Barbara Claypole White from Writer Unboxed. Peek: “Control your social media. Don’t let it control you.” 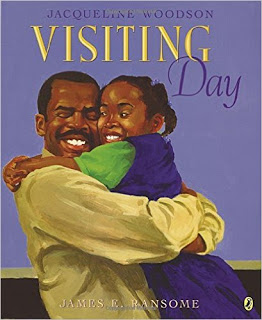 The Sibling Reality: When Picture Books Stop Being Nice and Start Getting Real by Elizabeth Bird from A Fuse #8 Production at School Library Journal. Peek: “…picture books that pick apart the nature of sibling relationships in interesting ways. I don’t mean fighting. I mean that crazy pushmepullyou of loving each other to the extreme mixed with scream-at-the-top-of-your-lungs annoyance.”

How I Got Into Publishing: Luana Horry, Editorial Assistant at HarperCollins Children’s Books from CBC Diversity. Peek: “It felt important to me to build a career in an industry where I could make a difference in the lives of children like my niece, who deserve better than a peripheral reading and cultural experience.”

Become a Story Genius: How Your Character’s Misbelief Drives The Plot by Lisa Cron from Writers Helping Writers. Peek: “What readers are wired to come for is insight into what people do when push comes to shove and, most importantly, why they do it. We’re looking for inside intel into human nature, the better to navigate this scary, beautiful world ourselves.”

The Cooling Off Period: Handling Manuscript Feedback Effectively by Mary Lindsey from QueryTracker.com. Peek: “After one-to-three days, I’ve had time to process the suggestions logically, rather than react emotionally.”

Note for #ownvoices writers: Take the time, set aside your ego, and thoughtfully consider feedback. Stretch to improve your craft, your stories! But don’t bow to direction that minimizes your identity-grounded sensibility and/or literary traditions in favor of the outsider reader’s. (Time and again, I’ve seen mentees struggle with these dynamics.)

With agents/editors, collect your thoughts and then, if there’s an opportunity, professionally engage in the conversation. Explain where you’re coming from and why. Anyone who’s a good match will be open, appreciative and respectful of your perspective. (Ideally, get feedback and discuss prior to signing with an agency or signing a publishing contract to get a feel.)

I’ve been blessed with insightful and sensitive editors at HarperChildren’s and Candlewick as well as my rock-star agent at Curtis Brown Ltd. I personally know many wonderful editors and agents. They’re out there. They want to connect with a diversity of great writers, make terrific books, and help grow careers. Keep revising and submitting! 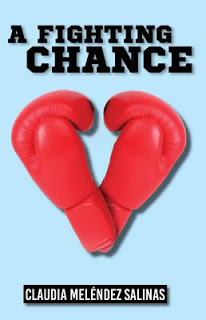 The Powerful Role of Coach in the Latinx Community by Claudia Meléndez Salinas from Latinxs in Kidlit. Peek: “They’re not just coaches: they’re role models, mentors, friends. They’re the glue of after-school programs, the difference between wholesome entertainment and life in the streets.”

Interview with Zetta Elliott from Rich in Color. Peek: “I don’t think about book sales that much; I want the books to exist and to be available to those who are looking for mirrors (see below). I’m leading more workshops on indie/community-based publishing these days, and that makes me feel visible and valued because I’m showing other aspiring writers how to make their own books outside of the traditional system.”

Author Cori McCarthy Discusses Her Book Being Optioned by Beth Bacon from Digital Book World. Peek: “As someone with a screenwriting degree, I feel uniquely qualified to say to Sony, ‘I think you should hire a screenwriter.'”

Alert! A New Kind of Bigotry: One-Star Reviews on Goodreads by Lee Wind from SCBWI. Peek: “The review copies aren’t out yet. But suddenly the book’s Goodreads account had more than 1,500 ratings of the book. The book that almost none of them, unless they were personal friends with the author, could have possibly read.” Note: hateful online harassment, targeted at female children’s-YA authors, especially those who’re women of color, is becoming increasingly frequent. Not all of us go public with our stories. Please show kindness toward one another within our children’s-YA literature community. Watch out for each other out there.

Banned Books Week Roundtable: The Evolution of Censorship by Hannah Ehrlich from Lee & Low. Peek: “I try to balance writing about controversial issues by writing with young people’s best interest in mind. That is, I always try to approach these topics honestly, but also respectfully and responsibly.”

People keep asking how my new book is coming. I’m so honored by the enthusiasm! Let me assure you that a YA manuscript will be zinging through the Internet to Candlewick Press on Monday morning. I know, right?

I’m in the last stages of polish for the first-round submission, which–for me–means a writer friend (in this case, Sean Petrie) is reading aloud the whole manuscript, start to finish. Then I’ll key in changes and put together a note for my editor. (You should hear him do voices in dialogue; hilarious!)

On Twitter @CynLeitichSmith, I mentioned doing the read aloud and got a few questions and comments in reply. So here the scoop: 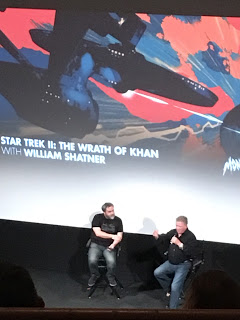 By the time a manuscript reaches submittable level, I’ve read it so many times that I tend to see what I meant to write, what
makes the most sense, to the point that my mind’s eye will fill in missing words.

Also, hearing another writer read the text will alert me oddities of cadence or awkward language. What’s more I benefit from hearing the reader’s emotional reaction, word by word and page by page, over the course of the novel.

I highly recommend doing this twice during the novel-writing process. Before initial submission and after revising informed by the editor’s feedback, right before you turn in.

What else? My other highlight of the week was a Q&A with William Shatner, followed by a showing of “Star Trek II: The Wrath of Khan” last Friday night at Austin’s historic Paramount Theater.

Mr. Shatner was engaging and funny. He spoke at length about his experiences working with and his admiration for Leonard Nimoy and Ricardo Montalban (and his pecs).

He seemed a bit embarrassed by his early overacting on the small screen and explained it as a byproduct of his stage training. He’d been used to projecting to a live audience rather than for a camera that would magnify his every word, gesture and expression. Which makes total sense.

He likewise felt the need to apologize in an affectionate way for the special effects of the film as compared to today’s standards. But then he fully embraced the suggestion that the overall effect was “charming,” that what the crew had been able to do, given the limits of the era was “inspiring.” I strongly agree.

What else? I am still thinking about a link I featured last week, We Are Still Here: An Interview with Debbie Reese from NCTE. More specifically, about this part: 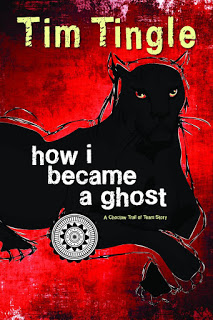 “Tim Tingle (he’s Choctaw) talks about visiting a school in Texas where he read from his outstanding book about the Trail of Tears, How I Became a Ghost. The teacher apologized to him, saying that she had to teach kids that Choctaws are extinct because that is the answer they’ll need on a test she has to give them.”

Tim and I are both Native authors, Texas authors. I greatly value him and his books. Please take a moment to visit Choctaw Nation.You’ll find a great people with a past, a present and a future.