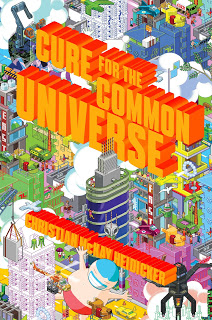 Christian McKay Heidicker is the first-time author of Cure for the Common Universe (Simon & Schuster, 2016). From the promotional copy:

Sixteen-year-old Jaxon is being committed to video game rehab…ten minutes after he met a girl. A living, breathing girl named Serena, who not only laughed at his jokes but actually kinda sorta seemed excited when she agreed to go out with him.


In rehab, he can’t blast his way through galaxies to reach her. He can’t slash through armies to kiss her sweet lips. Instead, he has just four days to earn one million points by learning real-life skills. And he’ll do whatever it takes—lie, cheat, steal, even learn how to cross-stitch—in order to make it to his date.


If all else fails, Jaxon will have to bare his soul to the other teens in treatment, confront his mother’s absence, and maybe admit that it’s more than video games that stand in the way of a real connection.


Prepare to be cured.

This all began when I told my agent, John Cusick, that I’d write a YA book about a kid committed to video game rehab. His excitement was infectious, and I got that fluttery feeling of embarking on a new adventure. Of darkness unlit. Of stones unturned. Of all the little surprises that come with blindly slashing out with my pen and hoping for the bloody best.

That fluttery feeling vanished when I realized I hadn’t played video games for years, let alone had any clue what it was like to be addicted to them.

In order to survive as a freelance writer, my entire life had become carefully structured to eliminate time-wasters. I worked all possible hours, filled my downtime with reading, exercising, eating healthily, and not buying expensive things like the next generation of PlayStation or Xbox. I had become completely unversed in the world of video games and unhealthy amounts of playing.

I realized if I tried to write a book about video games, I’d out myself as a fraud. I’d make out-of-date gaming references, the community would eat me for breakfast, and I’d become next on Gamergate’s death list. (Now that I know a thing or two, I can confidently say that many gaming references do not go out of fashion, and that being on Gamergate’s threat list is actually a good thing.)

Let’s face it. As novelists we’re all impostors. We don’t really remember what it’s like to have that first kiss. We’ve never reached to the back of the wardrobe and in place of fur felt pine needles. Our goal is to seem the least impostery as possible. To convince the reader that this stuff is legit.

Still, the idea was good. Video game rehab? I’d never seen that before, and that’s a rare thing in any medium. So I needed a plan. My plan was this: get addicted to video games.*

So out with work!

Forget healthy eating and gluten intolerance. Forget that coffee turns me into an absolute monster and dairy turns my insides into the Bog of Eternal Stench!

I bought myself a month and turned my life into that of a sixteen-year-old video game addict on summer vacation. I drank coffee from noon (when I woke up) until three in the morning when I went to sleep. (My character drinks energy drinks, but one can only go so far, dear reader.) I slept too much. I didn’t exercise. Sometimes I put whiskey in my morning coffee. I only read gaming news, but only if I really felt like it and only if I had to wait for a game to download.

Mostly, I played video games. I played a lot of video games. I continued to play throughout the duration of writing the book, but in October 2012, I played so much it would have made the characters in my book quirk their eyebrows.

I was trying to get addicted. All of my dopamine release came from beating levels, leveling up characters, downloading DLCs. When I went to the bathroom, I brought my iPad with me and played Candy Crush. (Considering what my new and worsened diet was doing to my digestion, I played a lot of Candy Crush.)

I beat Dark Souls. I beat Sword & Sworcery. I played Starcraft and Hearthstone and Diablo III. I bought a Nintendo 3DS and played through all the Mario and Zelda games I’d missed out over all the years. (Definitely the highlight.) I got lost in world after world, and adulthood as I knew it became a faint haze around an ever-glowing screen.

And guess what? It was hard. 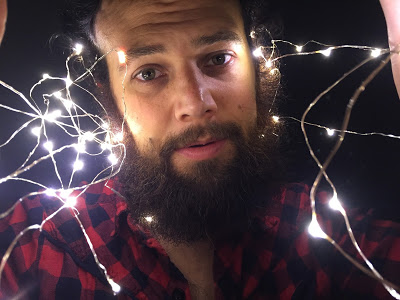 You’d think it would be easy doing as little as humanly possible, only filling one’s time with video games.

Video games are fun. Many are designed to keep you falling into them again and again, to captivate you enough to stick around for hours on end. But I had so carefully trained myself to not be that way so I could write.

During this indulgent month of October, I felt lazy. I felt sick. I felt jittery and uncomfortable in my skin and a little voice inside my head kept saying, “No, no, no. Stop doing nothing. You’re dying.”

I was disgusted with myself. I liked the games I was playing, but they didn’t bring the same satisfaction of selling a short story.

Like I said, it was really hard. But it was nothing compared to what I was going to embark on next.

I ended my month of terror with a bang. On Halloween night, at 11:56 p.m., I drank four shots of whiskey and became a vomiting sprinkler on my friends’ front lawn. (Apologies, Alan and Alan).

My girlfriend at the time drove me home and poured me into bed. I slept for thirteen hours. . . and when I awoke late afternoon on Nov. 1, I began something new.
I didn’t put on the coffee pot. I didn’t boot up the PlayStation to see if any system updates needed downloading. I didn’t bring the iPad to the bathroom.

Instead, I entered Phase 2 of my research.

The character in my book was going to rehab, where all creature comforts would be taken away from him. And so I spent the entirety of November without sugar, caffeine, music, phone, books*, internet*, or of course, video games.

I called it my no-nothing November.

(Er, no stimulants, at least. But that isn’t quite as catchy.)

After surviving a two-day hangover unaided by stimulants of any sort, I crawled out of bed . . . and I went out into the world. I ran in the morning. I talked to people at coffee shops while sipping herbal tea. I took ukulele lessons. I learned how to cross-stitch. I cleaned Alan’s and Alan’s puke-covered lawn (just kidding I didn’t; I just realized this would have been a nice thing to have done (sorry again, Alans)). I studied life without my nose buried in a book.*

And mostly, I wrote. I wrote about a kid who had all of his comforts taken away and was forced to earn points through a sort of gamified therapy.
I don’t know if any of this actually worked or not . . . I’m not sure if it really added anything to the book.

So, um, take that into consideration before flying off the rails for your own book.

*I use the term “addicted” lightly. Read Cure for the Common Universe for a full explanation.

**The most difficult, by far.

***I also didn’t surf the internet, save my email—for emergencies and so I wasn’t fired from my job.

****Ug, this is starting to sound like some sort of new age instruction manual, which I swear it is not; I just wanted to see what it would be like to be the character in my book.

Video games are the fastest growing medium in the world, so it’s pretty difficult to remain relevant when writing about current games. Fortunately, there’s a persistent spine in gaming (your Blizzards, your Nintendos, your Easter eggs). I tried to focus on those mainstays and accept the fact that no matter what I did I would probably piss off and please an equal number of gamers.

If I had attempted to copy the language of gamers verbatim, I would have set myself up for failure. (Although having a game-addicted roommate during the edits of this book definitely helped me sprinkle in some legit jargon.) That’s why I like to follow the Joss Whedon rule of leading the charge on language instead of attempting to copy it.

For the dialogue, I ended up stealing a lot of hilarious lines from my friends—truly iconic things that I lifted straight out of real-life conversations and put into the text. During a rousing game of racquetball, a friend aced me, stuck his racquet in my face, and screamed, “Nobody puts princess in a castle!” A barista once mentioned how stepping on a LEGO was a lot more rage inducing than playing Grand Theft Auto. And a previous student told me about a—ahem—particular sensory combination involving Nutella. I blushed . . . and then I stole it.

I stole all of these with everyone’s permission, of course.