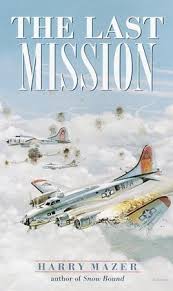 Harry Mazer: Obituary from Legacy.com. Peek: “…died on April 7, 2016, 71 years after he leapt out of a B-17 bomber that had been shot down over Pilsen, Czechoslovakia, during the last mission of World War II.

“Harry was one of the few survivors of the crew, a story he loved to tell and re-created in a fictionalized form in his young adult novel, The Last Mission. He received a Purple Heart and an Air Medal with four bronze oak leaf clusters for his service.”

Harry was married to fellow children’s book author Norma Fox Mazer for 69 years, until her 2009 death at age 78.