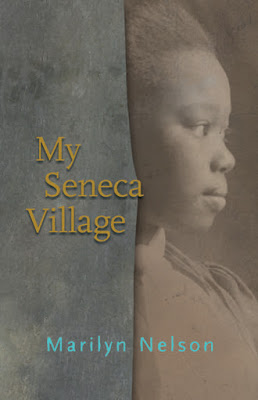 Congratulations to Marilyn Nelson, winner of the L.A. Times Book Prize (young adult) for My Seneca Village (namelos). From the promotional copy:

Quiet for more than 135 years, the voices of Seneca Village are rising again. Angela Riddles ponders being free-but-not-free. The orphaned Donnelly brothers get gold fever. A conjurer sees past his era and into ours.

A multi-racial, multi-ethnic neighborhood in the center of Manhattan, it thrived in the middle years of the 19th century. Families prayed in its churches, children learned in its school, babies were born, and loved ones were laid to rest. Then work crews arrived to build Central Park, and Seneca Village disappeared.

Illustrated in the poet’s own words — with brief prose descriptions of what she sees inside her poems — this collection takes readers back in time and deep into the mind’s eye of one of America’s most gifted writers. Included as well is a foreword that outlines the history of Seneca Village and a guide to the variety of poetic forms she employs throughout this exceptional book. 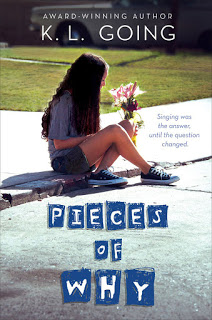 The Small & Mighty Ampersand: Creating Delightful, Messy Characters by Sarah Callender from Writer Unboxed. Peek: “We don’t like discovering that our partners, families or friends are not who we thought, but when we experience surprise and betrayal through characters and their stories? Our fancies are tickled.”

Author Interview: K.L. Going from The Children’s Writers Guild. Peek: “My father has been actively involved in prison ministry, and there are literally millions of children in this country who have a parent in prison, so I also felt inspired to write a book these kids could identify with and see themselves reflected in a positive way.”

Make Way for Celebration: These Ducklings are Turning 75 by Lynn Neary from NPR. Peek: “Itching to begin the illustrations, McCloskey went down to the Washington Square Market, bought a crate of ducks and brought them back to his Greenwich Village studio apartment. He washed the ducklings off in the bathtub, put them in a pan and got to work.”

Why I Came Out as a Gay Children’s Book Author by Alexander London from Buzz Feed. Peek: “My existence shouldn’t be controversial.”

Interview: Cory McCarthy on Breaking Sky by Joyce Lamb from Happy Ever After. Peek: “Because of this near-futuristic setting and the element of militarized youth, I often describe the story as a cross between Ender’s Game and Code Name Verity.”

See also Beverly Cleary at 100: All the Tributes by Travis Jonker for School Library Journal. 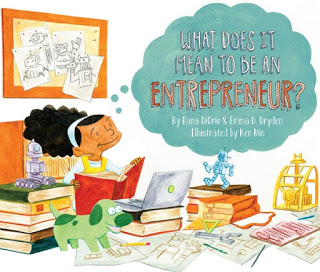 Texas librarians! I look forward to seeing you next week at the TLA Annual Conference!

Join me for “#WeNeedDiverseBooks in Texas” with Jason Low of Lee & Low, Isabel Quintero of Cinco Puntos Press and Jessica Russell of Harris County Public Library at 4 p.m. April 20 at Convention Center 332 CF, level 3. I’ll also be signing the Feral series from noon to 1 p.m. April 21 in aisle 3 of the Authors Signing Area.

Looking for real estate in South Austin? My friends just put this gem on the market.

Link of the Week: Real Estate Agent on the Home Values in Harriet the Spy, Stuart Little, Eloise & Other Children’s Book Characters by Michelle Colman from CityRealty.