Kicking, screaming, and spinning tantrums are appropriate in a picture book—though surprisingly sparse in children’s literature for how prevalent the are in the life of most children, but we don’t expect to see a teenager spinning on the floor throwing a fit because the “‘rents won’t extend curfew.”

Know your audience when you write across the ages/genres of children’s and young adult literature.

For instance, when does a child learn “conservation” and how does that affect the readers ability to know when a repeated image of a child learning to play or crawl is really just one kid and not a whole group of them?

And when do children start to understand abstractions that would allow them to comprehend that two people can have different opinions and still both be right?

How does this new emerging skill affect the psychology of a middle grade novel?

The answers to these questions illustrate the essential need for understanding the psychological and cognitive development of children and adolescents.

Seriously though, you can learn so much about the psychology of kids from raising them, working with them, visiting schools, and various other essential interactions with your target audience.

These relationships are key to our own happiness and the development of a natural and organic understanding of what it means to be a kid or a teen in our society today.

It’s important that you consider the “today” component because writers for young readers are often writing to rescue or relate to their own childhood self when our childhood is world’s away from the experiences of today’s child. The current six year olds were born in a world that can’t recognize a landline phone, has probably never used a point-and-shoot camera, and can’t remember a world when there weren’t 40,000 television channels targeted to children, often watched on a game system or tablet.

We need to know the kids of today by getting to relating to real world kids in their own environment. Personal connections are a must. But you can also pick up a lot by watching their shows, reading their magazines, studying fellow authors, watching videos until far too late at nigh.

I’m all for the organic—understanding of young people, dialogue and imagery in writing, and food, but there is something to be said for academic/book knowledge or that’s just the geek in my talking and quite frankly it never shuts up, so listen here, if you want to know more about child psychology—don’t take my word for it. Learn a thing or two from a specialist in the field, realizing that three specialists will have at least six different opinions so read up on what folks have to say.

Here are a few suggestions:

To be truthful, I probably only picked this because the author said “geeked out”

A veritable panoply of books to choose from. Which I of course chose so I could say “panoply.”

And most importantly, read the work of writers who get kids—what they like, what they want, what they need. Don’t just read the most popular books for teens because those books most often address the wish fulfillment , adrenaline rush, romantic-angst-driven elements of teen life. You also need to study the writing that addresses the deeper social issues of teen life.

I’m even a bigger fan of YA World Literature because, perhaps it’s just me, but it seems that too much of the YA literature in the U.S. focuses on me, myself, and my friends versus what the next generation could do to make the world a better place.

Internationally, adolescent literature focuses less on how a teen can become an individual and more on how a teen can learn to contribute to society. But that’s my “taking care of the world” bias coming out again. I just want to take care of everybody.

Speaking of everybody, which is much easier than speaking to everybody, but as a writer you’re trying to do both—portray the world as it really is, address as wide an audience as possible, and provide an authentic , accurate, and compelling look at the diversity in our society today, not just in the U.S., but globally.

You’re writing realism and the reality is our world is very diverse and that diversity should be reflected in our writing from books for babies to novels for teens. For instance, Everywhere Babies is an adorable celebration of infants and their families and it shows an enormous range of diversity, but I wonder, where are the parents with tattoos? The folks who live out in the country? The immigrants who wear the clothes they grew up with?

No book can show the whole world. Each book can only be a window into part of the world, but it helps to know not only the “universals” of youth development, and to learn how class, religion, ethnicity, gender orientation, and other cultural elements influence a child’s development.

We are, after all, a society of artists—writers, illustrators, readers, and critics, who are engaging our world one word, one line, one book at a time.

Good luck! And remember, let your characters act their age! 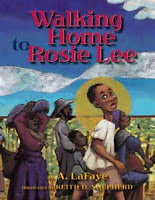 Alexandria LaFaye, is an author of a baker’s dozen of books for young readers.

These include Walking Home to Rosie Lee (Cinco Puntos, 2011), a picture book about the reunification of African American families at the end of the Civil War, to the young adult novel-in-verse, Pretty Omens (Anchor & Plume, 2015), a retelling of the myth of Cassandra in a coal mining community in Virginia in 1911.

2 Replies to “Guest Post: Alexandria LaFaye on Acting Your Age: Writing Across the Ages of Young Readers”