I love it when people ask the title of my new book. I get to say, “Character, Driven.”

Then, if they nod knowingly, I add, “Character, comma, Driven.”

If they smile at that, I add, “It’s a plot-driven novel.”

I feel it’s a clever title. But a title has to be more than clever. It also has to be a good. It has a marketing job to do.

With 35 books or so to my credit, and close to 300 published short stories, I’ve created a lot of titles. Some were good. Some weren’t.

My first novel, published back in 1999, was about kids with special powers. The working title was “Psi School.” I wanted something better.

Back then, I often watched “Double Dare” on Nickelodeon with my daughter. At the end of the show, host Mark Summers would ask if anyone in the audience had a hidden talent. 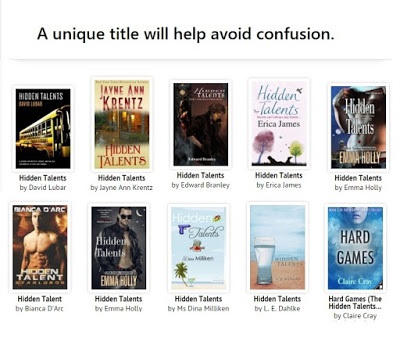 One day, as he said that, I realized Hidden Talents was a perfect title for my novel. This was back in the days when we didn’t instantly and constantly search the Internet for information.

It wasn’t until the book came out that I searched for it in online stores and discovered there was a Jayne Ann Krentz novel by the same name.

That’s when I learned my first rule: Try to make the title unique.

Even having a similar title can be a problem. I was aware that Wendelin von Draanen had written Flipped (Knopf, 2001) before I called a novel of mine Flip. (I couldn’t resist. The title fit the story so well.) I didn’t think it would be a problem.

I also didn’t think we’d ever be on the same panel at a conference. To this day, I still run into people who confuse the two books.

I didn’t have that problem with Dunk, which was about a boy who wants to work as a clown in a dunk tank. I checked. There wasn’t a previous book with that title. But the title presented another problem. I’ve met people who never picked up the book because they thought it was about basketball.

I guess there might have been people who picked it up for that very reason. Inevitably, some of them would be disappointed. My second rule: Avoid confusing potential readers.

A title has to work with a broad population. My novel, “Flux Sucks,” was renamed at the last minute, out of fear that “sucks” might keep it off the shelves in some communities. The hastily created new title seems to be a good one. Sleeping Freshmen Never Lie works well, I believe, because it is intriguing, and it can have multiple meanings.

I think the same holds true for Character, Driven. My main character, Cliff, is both driven to succeed in life and love, and driven by his friends because he lacks a car of his own.

The title also hints at the metafictional nature of the narrative.

I think my most successful title, in terms of marketability, caused a different sort of problem for me. The story collection, In the Land of the Lawn Weenies and Other Warped and Creepy Tales (Starscape, 2003)(excerpt), inspired such brilliant cover art from illustrator Bill Mayer that I decided the next collection also needed a Weenie title story. It was a smart move.

There are now seven Weenies collections, with an eighth coming in September. But it is a mixed blessing. Some people don’t take the books seriously, for that very reason. I’ve seen them referred to as “garbage books” by one blogger, who I suspect never looked beyond the cover, and a friend told of hearing a parent tell a child who’d snatched up a copy at a book fair to “pick a real book.”

Happily, the millions of copies in print remind me that, all in all, it was a good decision to run with the Weenies. (Not to mention the endless jokes I get to make when authors gather.)

I have a chapter book about a boy who is cursed to speak in puns. The title, Punished!, actually came to me first, inspiring the book. (I also wrote a sequel, Numbed!, where the same characters lose their math skills. That, too, began with the title.)

I never tire of saying to kids who select that book at a school signing, “I’m glad you got Punished!”

I feel it’s an excellent title. But I made a mistake when I went for emphasis. Some online book sellers aren’t set up to search for an exclamation point. So neither Punished! nor Punished will produce that book.

If you search for the keywords Punished and Lubar, you’ll find the book, and some alarming bondage photos (just kidding), but the truth is that people are often better at remembering titles than authors. So a title should be both memorable and searchable.

Speaking of which, I foolishly called an ebook of mine, built from stories that were deemed too problematic for the Weenies collections, Zero Tolerance Meets the Alien Death Ray and Other (Mostly) Inappropriate Stories. I suspect that many of the kids who heard me talk about it forgot the title by the time they got home. If not sooner.

I hope I chose wisely this time. As a title, Character, Driven is memorable (I hope), searchable (I tested the comma, and found no problems), and confusing only in a fun and ironic sort of way.

Is it a good title? I think so. But that’s really a question for the marketplace to decide. And that would be you. So let me know what you think. Or just smile and nod knowingly if we ever cross paths.