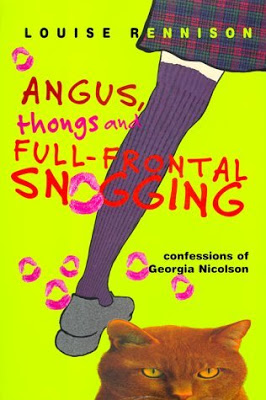 Louise Rennison (1951-2016), author – obituary: ‘Queen of Teen’ whose comic novels captured the horrors and occasional triumphs of adolescence from The Telegraph. Peek: “Louise Rennison, the author, who has died aged 64, was the creator of Georgia Nicolson, the 14-year-old protagonist of such young adult novels as Angus, Thongs and Full-Frontal Snogging and Startled by his Furry Shorts; the series achieved sales of 2.6 million in Britain alone.”

Goodbye, Louise Rennison – you captured the hilarious horror of girlhood by Rhiannon Lucy Cosslett from The Telegraph. Peek: “Rennison understood the unique, farcical horror of being a teenage girl.”

Five Things All Louise Rennison Fans Know to Be True by Jillian Capewell from The Huffington Post. Peek: “Thanks to Rennison, I added snogging (kissing), nunga-nungas (breasts), lurrrrrve (self-explanatory) and away laughing on a fast camel (still working that one out) to my repertoire.”

“My Hero: Louise Rennison” by Philip Ardagh from The Guardian. Peek: “…there is comfort in the fact that her laughter lives on through the pages of her books. She was a class act and one funny lady.” See also Literary Agents Pay Tribute to Rennison from The Bookseller.