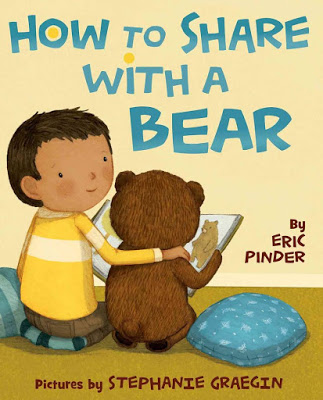 Eric Pinder is the author of four picture books and four adult nonfiction books. His most recent release is How to Share With a Bear, illustrated by Stephanie Graegin (Farrar, Straus & Giroux, 2015). From the promotional copy:

The perfect thing to do on a chilly day is to make a cave. But comfy caves never stay empty for long….


What can you do when a bear takes over your cave? Try to distract him with a trail of blueberries? Some honey? A nice, long back scratch?

How to Share With a Bear is a story about how although it’s not always easy, sharing with a sibling can be the most fun!

Congratulations on How to Share With a Bear! Tell me about the inspiration for this story.

Being a kid should automatically count as credit toward getting a degree in architecture, because we’ve all made blanket forts and blanket caves as kids. What’s more fun? I think every uncle, aunt, parent, and babysitter has had to master the architecture of a blanket cave at some point, too. Often it’s a collaborative effort, in the same way that reading a picture book is a shared experience.

For How to Share with a Bear, I had the blanket cave setting in mind from the start. The word “cave” got me thinking about real caves, and what you might find in one. That led naturally to a bear.

How or when did you make that leap in your imagination from bears being scary creatures that could eat you to being a cuddly companion?

William Faulkner’s “The Bear” was an early influence, even before I started writing for children. And no one gets through high school without seeing Shakespeare’s bear chase characters right off the stage. So we have this perception of bears as big and scary, but in childhood we’re also familiar with Fozzy Bear, Yogi Bear, Winnie-the-Pooh, and our own teddy bears.

Hear the word “bear” and you don’t know at first which you’re going to get: the terrifying grizzly or the funny, cuddly kind of bear. The very word “bear” creates uncertainty, all on its own.

Uncertainty creates tension and suspense. And suspense makes readers keep turning the pages. We have these two dueling, conflicting perceptions of bears lodged in our minds from an early age, and I think the subtle tension that evokes is what makes bears so great for storytelling.

Cat in the Clouds, If All the Animals Came Inside, Share with a Bear… I’m sensing a theme with animals and nature. 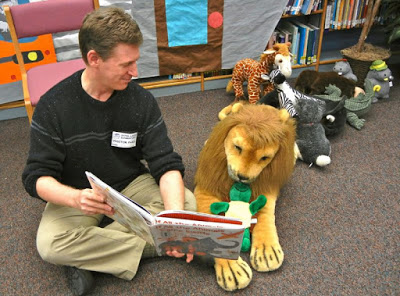 One of my earliest favorite memories is camping with my dad in Baxter State Park on a rainy afternoon when suddenly a moose stuck its head right into our leanto to say hi. I didn’t have that day in mind when writing If All the Animals Came Inside, but now that I think about it, that memory must have been an influence all along.

I know you spend a lot of time outdoors and have even written some books for grownups on that subject. Can you tell me what prompted you to write for children and what has been the biggest challenge in crafting stories for young readers?

One day a strange thing happened: Everyone in my circle of friends started having kids. Their houses were suddenly full of books by Seuss and Boynton and Silverstein. I’ve always liked poetry, and writing picture books is similar; they’re both read aloud—performed—so the sound and rhythm of each word and syllable matters. It’s almost like writing a song. Reading those old favorite books on friends’ shelves and hearing them performed out loud reminded me of how much fun they are. I had to start writing some of my own.

Writing for any age group is challenging. The biggest challenge with picture books is appealing to two different audiences at the same time: the grownup reading the book, and the child listening to them read. Re-watching Sesame Street recently made me appreciate how well they often write on two levels like that. One Sesame Street skit features a bear who is a writer. The bear’s name is Flo. It took me a second to connect the dots: Flo Bear, i.e. Gustave Flaubert, author of Madame Bovary. Clever joke! That second level of understanding flew completely over my head when I saw skits like that as a toddler, but it didn’t confuse or distract me, either. Watching it as a grownup, it made me chuckle.

What’s your process like? Do your stories simmer in your head for a long time before you sit down at the computer?

I leave a plate of cookies next to my laptop overnight and hope that elves will write the story for me. Then I get up the next morning, eat one of the stale cookies, mutter about elves, and start typing away on my own. To force myself to make time to write, I’ll put background music on the CD player and make a rule: no checking email or playing Scrabble or anything else but writing until the music stops. Usually the first half-hour is agonizing, but then I’ll get momentum.

Sometimes a single sentence or an opening scene will simmers for months before the rest of the story appears. At other times, like a gift from the Muses, a whole first draft will appear on the page in one sudden creative burst. But that’s rare. I should probably bake more cookies for the Muses.


You also teach creative writing at the New Hampshire Institute of Art. Does that also feed your creativity?

The best way to describe teaching is “exhausting but rewarding.” Lesson prep and commenting on student stories is time-consuming, but it’s worth it. Sometimes a student’s story or poem will be so good that it makes me grin the whole time I’m reading it. Just being part of a community where everyone loves books, talks about books, and asks smart questions about books on a weekly basis sparks creativity.

Of course, there are times when I wish I’d assigned less homework. (Right now, my students are probably saying, “Yeah, us too.”) It takes energy and time to critically read and edit dozens of pages of stories by others between classes, and that does leave less time and energy for your own creative work. It makes sticking to a regular writing schedule, even if it’s only an hour a day, extra important.

For most teachers the summer—blissful, leisurely summer—is the most productive season for our own writing. But the books we read and the classroom conversations we have during the rest of the year definitely fuel new writing projects.


I frequently see Facebook posts of you selling books at Farmers Markets. Tell me more about this unique venue choice. 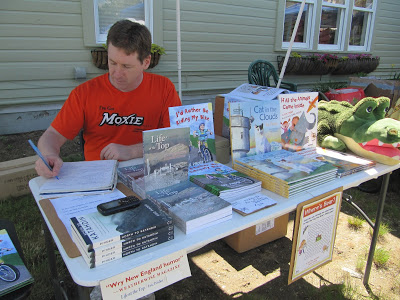 A middle-schooler at an author event said, “Hey, my mom runs the farmers’ market. You should sell your books there.”

That’s not a venue that would ever have occurred to me, but, being a starving writer in need of money, I filed the idea away and gave it a try.

The first day I sold $200 worth of books. People like getting signed copies. Even on rainy days when I sell nothing, it’s still fun to meet and talk to people. You can tell who the teachers and school librarians are.

The best part is seeing kids who really love books. A beginning reader at one market slowly read If All the Animals Came Inside aloud to his grandma, pausing every now and then to say, “Did you write this page and this page?” and “What the heck’s a yak!?” It was like listening to a funny DVD commentary for my own book. Halfway through, he told me, “You’re actually doing a really good job writing this. So far.” Kids are the bluntest and best of literary critics.

At some markets I’m the only writer there, sandwiched between vegetable stands, maple syrup, and corn on the cob. Other towns combine farmers’ markets with craft fairs, so there are painters, wood-carvers, and photographers there, too.

One tip for doing book-signings at venues like this is that it helps to have at least three or four different books on your table. People like to see a selection and be able to browse. I’ve seen authors with only a single title at their table, and they’ve struggled. The more covers you have on display, the more eye-catching your table will be.

What’s coming up next?

Another picture book with Stephanie Graegin, How to Build a Snow Bear, is coming in 2016, and The Perfect Pillow, illustrated by Chris Sheban, in 2017. The latter has animals but surprisingly no bears, which may be a first for me.

I also just finished a big revision of a creative nonfiction manuscript about adventures in teaching. That one does have bears, and wolves, and even a camel. So I guess I’m not done writing about animals just yet.


I read about the bats being cut from How to Share With a Bear – any plans for bat inclusion in future books? Or do you have something against bats?

I love bats! They eat mosquitoes and have sonar as a superpower. Sometimes a scene, like the one with the bats, is good on its own, but the story as a whole is stronger without it.

I save deleted scenes and pruned sentences in a folder called “Scraps.” Sometimes they’ll get used or adapted later in a different story.

Both Eric and Gayleen are alums of the Vermont College of Fine Arts Writing for Children and Young Adults program and graduated in the Winter 2011 class known as the Bat Poets.