The idea for Wheels of Change (Creston, 2014) came about through the discovery of two things while researching my family tree.

One was the fact that my paternal great-grandfather was a carriage maker in Washington D.C. in the late 1800s through the early 1900s.

The second was an invitation my grandmother received to a reception hosted by then President Theodore Roosevelt. Further research at the National Archives confirmed that she attended the reception and met Roosevelt.

Putting the two together became my premise: What if the livelihood of a carriage maker is threatened by progress of the modern world? To what lengths would a determined daughter, who adores her Papa’s way of life, go to save the business? Would she indeed go all the way to the president?

I wrote the first draft of Wheels of Change as a picture book.

When an editor commented that the voice, ideas and concepts were better suited to middle grade, I panicked. How could I possibly find a novel length story from twelve hundred words?

After I calmed down and cleared my head, ideas began to form and scenes rose from the fog. As I fleshed out the story, I did more research to make sure things were accurate to time and place. And, I discovered that adding some of the social and historical events of the era added depth to the plot in ways I hadn’t originally conceived.

It was absolutely essential to get the details accurate. Just because it was fiction didn’t mean I could do what you liked in terms of historical references. It had to be grounded in the reality of the time period. I wanted readers to trust the storytelling. They couldn’t do that if I was too lazy to find out if a 1908 nickel had a buffalo or picture of Washington on it.

I visited a buggy museum to get a feel for life in a carriage barn. I took a virtual tour of the White House and viewed film clips of Theodore Roosevelt and his family. I read numerous books about the turn of the Twentieth Century and life in Washington D.C. I perused cookbooks, newspapers, the Sears Catalog, and old maps to get a sense of daily life.

I found a wonderful on-line site called Streets of Washington that details businesses and buildings that existed way back when. I contacted Sagamore Hill, The Smithsonian, The Henry Ford Museum, and The Historical Society of Washington, D.C. for answers to specific questions.

Through it all, I was constantly amazed by how helpful people were. Whenever I had a question, historical experts were eager to share their knowledge.

My grandmother was a musician who played piano and organ in the silent movie houses of the time before she married and raised her sons. She kept scrapbooks of their accomplishments as well as mementos of special events in her own life. If she hadn’t saved that wonderful invitation, Wheels of Change might not have come about. For her efforts, I am truly grateful. 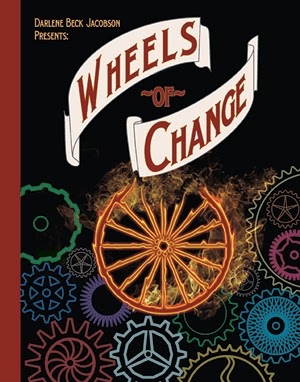 It is a turbulent time growing up in 1908. For twelve year old Emily Soper, life in Papa’s carriage barn is magic. Emily is more at home hearing the symphony of the blacksmith’s hammer, than trying to conform to the proper expectations of females.

Many prominent people own Papa’s carriages. He receives an order to make one for President Theodore Roosevelt.

Papa’s livelihood becomes threatened by racist neighbors, and horsepower of a different sort.

Emily is determined to save Papa’s business even if she has to go all the way to the President.