In the spring of 1981, Space Shuttle Columbia completed a successful orbital mission around the Earth, my hometown New York Islanders won the Stanley Cup and eight-year-old me wrote my first fan letter. It was not a letter to Shaun Cassidy or Scott Baio, or any other Tiger Beat sensation.

I’d just read The Little Leftover Witch, and my letter was to its author, Florence Laughlin.

Writers were (still are) my rock stars.

After reading this wonderful book I knew I wanted to be a writer. I thought perhaps, I might be a witch, too, but writing seemed more practical—especially since, try as I might, I could not get my room to clean itself just by snapping my fingers and wishing it so.

I can imagine what my letter to Florence Laughlin was like, written in my best penmanship. I likely told her about the construction paper and crayon creations I read to my third grade class. I probably described how I dressed up and performed stories for whomever would listen. I may have declared that, since reading her book, I would be a witch for Halloween. I know I told her I loved to read. I know this because her generous reply began with:

“You are my favorite kind of people! You tell me that you just love to read.” 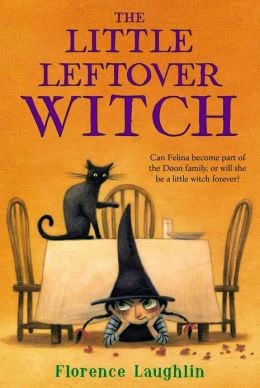 She described how the idea for the book had come to her twenty years earlier, and that the little witch herself nudged and pestered her to write her story.

The thought of the mischievous little witch pestering Florence Laughlin (like I often pestered my mother) delighted me. But I also heard something else—the story needed to come out. It needed to be written.

I knew that feeling. I carried stories inside of me, too—all asking for a chance to be told. I got to work at once.
In the ensuing years, I wrote whenever I could, and even when I couldn’t.

I studied the craft, attended conferences, joined critique groups, and earned my MFA at the fabulous Vermont College of Fine Arts.

I spent countless hours at my laptop, writing and revising, creating and honing, immersed in worlds of my own creation.

None of my efforts led to a book contract. There were dark moments, soothed by chocolate and loved ones, when the “what ifs” and “never wills” mingled with the stories inside my head. My dream drifted further away, like a little witch, gliding off into the Halloween night on her broomstick.

What I wouldn’t have given for a touch of her magic!

But I kept at it. Just like the little witch’s, my stories wanted to be told and I needed to write them. Slowly, that started to become enough.

Then, an amazing thing happened. My novel, Devin Rhodes Is Dead (Mackinac Island/Charlesbridge, 2014) won the National Association of Elementary School Principals Children’s Book Award, and I received a publishing contract from marvelous Charlesbridge. I do believe the best things happen when we least expect them.

Much time has passed since I was the girl who opened that letter and dreamed of writing books. I want to tell her—that impatient little one in a hurry to dance with words and share her stories—that it won’t be easy. But then, we all have our journey, and this is hers. This is mine.

In the end, we write our own stories. Mine was filled with hard work, determination, stick-to-it-iveness and bucket loads of gratitude.

And I think, a bit of magic, after all.

One Reply to “Guest Post & Giveaway: Jennifer Wolf Kam on Words from the Past”