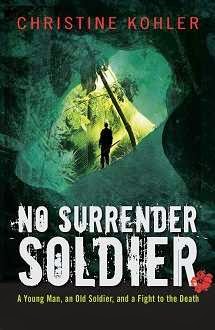 Christine Kohler is the first-time author of No Surrender Soldier (Merit Press, 2014). From the promotional copy:

A young man, an old soldier, and a terrible injustice. Should the punishment be death?

Growing up on Guam in 1972, fifteen-year-old Kiko is beset by worries: He’s never kissed a girl, and he thinks it’s possible he never will. The popular guys get all the attention, but the worst part is that Kiko has serious problems at home. His older brother is missing in Vietnam; his grandfather is losing it to dementia; he just learned that his mother was raped in World War II by a Japanese soldier.

It all comes together when he discovers an old man, a Japanese soldier, hiding in the jungle behind his house. It’s not the same man who raped his mother, but, in his rage, Kiko cares only about protecting his family and avenging his mom – no matter what it takes.

And so, a shy, peaceable boy begins to plan a murder. But how far will Kiko go to prove to himself that he’s a man ?

Based on a historical incident, No Surrender Soldier is the story of a boy grappling with ancient questions of courage and manhood before he can move on.

What inspired you to choose the particular point of view–first, second, third, omniscient (or some alternating combination) featured in your novel? What considerations came into play? Did you try the story from a different point of view at some point? If so, what made you change your mind?

Originally I wasn’t sure what I was going to do with this idea; I only had a premise—a 15-year-old Chamorro boy discovers his mother was raped during WWII by a Japanese soldier; what he doesn’t know is that there is a Japanese soldier who has been hiding in the jungle behind the boy’s house for 28 years since the liberation of Guam during WWII.

So I wrote the Chamorro family’s chapters in third person omniscient. That way I could fully flesh out the characters of entire family—Kiko, tatan (grandfather), tata (father), nana (mother), and Bobo (dog).

From the very first draft, the story was in alternating point of view (POV) chapters between Kiko and the WWII Japanese soldier, Isamu Seto. But there was no prologue nor framing until much later.

From the first draft, Seto’s chapters were in third person limited omniscient with a close psychic distance. That never changed.

All that changed regarding Seto’s chapters is that they increased, and in deeper revisions, I had to keep making his routines bump up against Kiko’s so there was a constant cause and effect, action and reaction, actions and consequences. The plot and subplot run like two railroad tracks that keep intersecting until the big collision (climax).

Once I had the family fleshed out and knew where they were and what they were all doing and how they would all react to each other and situations, then I needed to peel it all apart and put the focus on only Kiko, since he is the main character and it’s his story.

To convert Kiko’s chapters to limited omniscient I highlighted each character and his or her actions, dialogue, internal monologue (most IM should have been Kiko’s only) with different colored highlighters.

Then anything that did not adhere to Kiko’s plot problems or was from Kiko’s POV got axed. I kept his chapters in third person.

I didn’t count how many revisions I wrote, so let’s just say that eventually I took the plunge and wrote Kiko’s chapters in first person.

This was a difficult decision, not because I didn’t know it might make the story more compelling, but because I was so afraid of not being able to write an authentic 15-year-old Chamorro boy’s voice. There is no fudging in first person. And I write narrative in a character’s voice, too, just not as heavy in dialect. (Writing pidgin English is an entirely different writing craft topic.)

I would never have attempted either of these character voices had I not lived on Pacific-Asian islands, including Japan and Guam, for a decade. But in the end, I was glad I settled on third person for the Japanese soldier and first person for the Chamorro teen because I believe it is what added to making their chapters so distinctly different.

No Surrender Soldier is historical fiction set on Guam during the Vietnam war era, specifically 1972. It also involves a WWII topic, the occupation of Guam by the Japanese. And I needed to research my Japanese character’s pre-WWII life in Japan. So I researched three time periods and two Pacific island locations.

Although I had lived on both of these islands, I did not live in the specific locales of my characters’ settings nor during these early of dates.
What drew me first to this topic and premise was my curiosity about why the Japanese soldier hid in the jungle for 28 years, suffering such extreme deprivation. What I couldn’t shake from working and living in Asia-Pacific was the atrocities done to the occupied people during WWII. So I guess you could say it was seeing human suffering on both sides of battling nations that drew me to combine these two situations/concepts.

There was never a question in my mind as to when the story would take place—1972, the year in which the real No Surrender Soldier, Shoichi Yokoi, was captured. Of course the Vietnam War was still in action, though winding down. But it reinforced the war theme since my story deals with the after-effects of war and how it affects families for generations.

At the time I started writing No Surrender Soldier I had lived on the U.S. mainland for a decade. I had recently left my job as a copy editor at the San Antonio Express-News to write full-time and specialize in children’s literature. So it was more challenging to get the research materials I wanted.

When I had lived on Guam I had the foresight to buy the Guam history book in high schools, although I didn’t know at the time I would write a novel. I read this history book cover to cover.

Then I read every book I could borrow from the library (not many) or purchase on-line. But more importantly, I wanted to read all the newspaper accounts—U.S. and Japanese—about Yokoi. I contacted my Gannett publisher, Lee Webber, and he had the archivist Carmelita Blas copy and mail me copies of Pacific Daily News articles. Dirk Ballendorf, then director of the Micronesian Area Research Center (MARC) at the University of Guam, also had an archivist Lourdes Nededog send me copies of everything in the files about Yokoi, which included foreign press clippings.

To purchase a compilation of Japanese journalists’ articles translated into English, I had to go on-line to an antique book dealer in Canada. I also read Yokoi’s autobiography, which was mostly about his life after he returned to Japan so it wasn’t as helpful.

A funny side note regarding research: I’ve never lived on a farm, so when I wanted to write a pig-slaughtering chapter I checked out from the San Antonio library a book on how to slaughter pigs.

My husband used to spend his summers as a child on a farm and he said if anyone checked my library history they would show up at my door in the city and wonder what I’m up to.

Now that No Surrender Soldier is out, it’s being sold on-line at a sited called “Home Butchering Books”. No lie! Look it up!

I also contacted via internet Raymond Baza, a musician and composer, to ask questions about Chamorro music since it is as integral to the fiesta as food.

I had no problem building my world—place, culture, customs, food, etc. What was challenging for me was to know what to cut and what to keep in revision. I had to cut a tremendous amount of background and description so it wouldn’t sacrifice the natural storytelling.