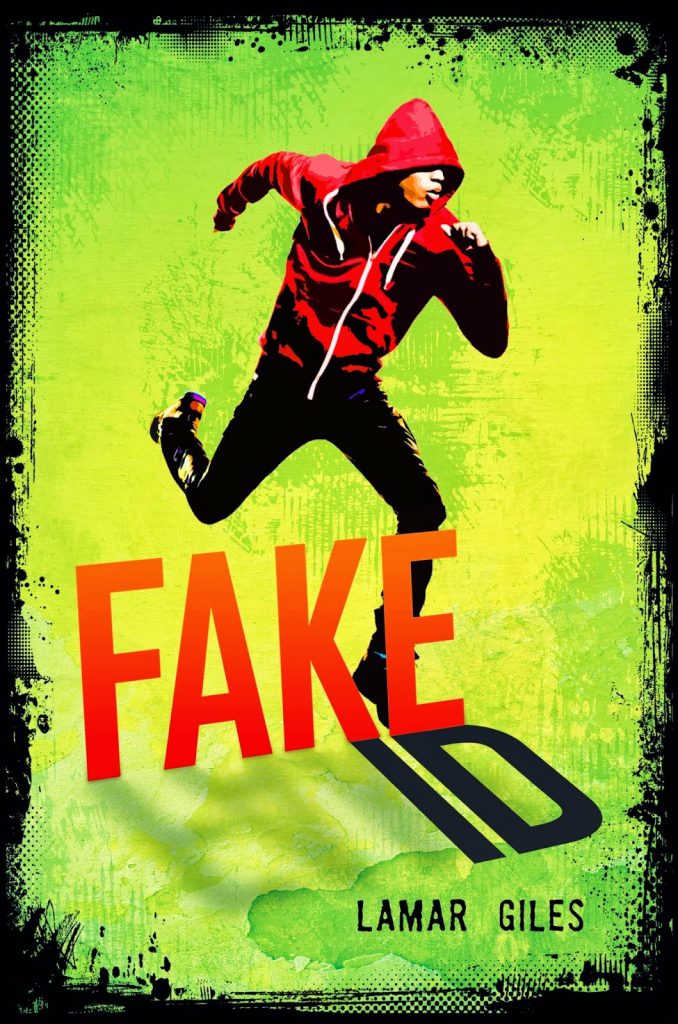 Lamar Giles is the first-time author of Fake ID (HarperCollins, 2014). From the promotional copy:

Nick Pearson is hiding in plain sight. In fact, his name isn’t really Nick Pearson. He shouldn’t tell you his real name, his real hometown, or why his family just moved to Stepton, Virginia.

And he definitely shouldn’t tell you about his friend Eli Cruz and the major conspiracy Eli was uncovering when he died. About how Nick had to choose between solving Eli’s murder with his hot sister, Reya, and “staying low-key” like the Program said to do.


But he’s going to tell you—unless he gets caught first….

I did have concerns. Fake ID is not the typical YA novel in a few ways.

First, the hero, Nick, is a 15-year-old African-American male. The percentage of YA books that feature an African-American male (or any person of color, male or female) as the main character is shockingly low. That alone presented an edge that I knew many publishers would shy away from.

Second, having the story be a contemporary murder mystery added another edge. Dealing with a modern, streetwise male in a town that is full of seedy figures, and trying to incorporate a noir sensibility into it all, meant themes of cynicism, violence, and for this story, sex.

All of these things can exist in the extreme in an adult novel, but in YA many folks have ideas of what you can’t do. So, it was tempting to pull punches.

However, I didn’t want to shy away from harsh language (used in moderation), or the flaws in Nick and his peers. There are plenty of books out there that soften language, or cut away from hard visuals, or give the hero an exaggerated sense of morality and social enlightenment. I’ve enjoyed many of those books, but I didn’t want Fake ID to be one of them.

There’s a reason why the first line in my book is, “This is how you get your ass kicked.” (A line that’s never changed over the course of five drafts) I wanted people to know what they were getting into. That way if a reader or a reader’s parent picked the book up, and took issue with the language in line 1, they could easily choose to go with something else without a lot of wasted time.

Now, was that decision the right one? Depends on how you’re judging. I have had a few readers reach out to me with concerns over the language, mainly the cursing, and some terms Nick uses that are considered sexist. I appreciate every single person who reads my work, so when I get emails about things like that I take them very seriously. It’s never my intent to demean or offend. But, I feel like I’ve been true to the character. The book’s told totally from Nick’s point of view. He’s a 15-year-old boy who uses language that feels realistic considering his culture, geography, and scene context. Unfortunately, that has the potential to draw ire.

But, I believe if you’re writing fiction with the goal of pleasing everyone who reads it, you’re writing bland fiction. Overall, the vast majority of readers have expressed appreciation for Fake ID. Even people who’ve taken issue with the language have pointed out things about the book and Nick’s character that they enjoyed. With that in mind, I think my decisions have been sound.

I approached promotion with an eight-week plan (because I’d read somewhere that was the amount of time that was feasible to promote a book after its release…not sure how true that is, but it felt solid).

The planning for those eight post-release weeks started well before Fake ID debuted, with the heavy prep taking place about four months prior to release.

A small portion of that involved printing costs (bookmarks, promotional giveaway items, wardrobe items for events) and larger chunks were dedicated to travel, and the rest for online advertising opportunities.

I got these ideas from other authors who’d published before me, trying to take note of what they felt was effective or ineffective.

I’ve been using Facebook’s advertising features a lot. I don’t know many authors who’ve used those tools (not to say authors aren’t doing it…I’m just not familiar with many who are). I like the idea of running short, low budget campaigns to increase awareness around what I’m doing. I have no clue how that’s translating to sales, but I’ve been to several events where people have shown up because they’ve seen the facebook ads, so I know it’s doing something.

Anyhow, during my eight weeks, I’ve pretty much had signings, conferences, or some other form of public interaction happening every weekend, which is about the only time I can do book events due to still having a day job. I’ve yet to have a poor turnout at any events, which is a plus.

As anyone who’s involved in publishing can attest, it’s a bit of a mystery just how well your book’s selling until you see a royalty statement, so seeing enthusiastic people when you go places helps subdue some of the “am I doing okay?” anxiety.

I’m enjoying doing promotional things, and I have several events scheduled beyond the end of my initial eight-week plan, but it can be fairly exhausting.

I attribute this to the fact that I do have a day job, so juggling that and my writing career has resulted in about four solid months of working seven days a week.

If I had any advice to give to anyone debuting in the near future, it’s that you should schedule some downtime. Build in a weekend (or two, or three) where you can completely step away from publishing duties.

Maintain your mental and physical health above all else. We all want successful careers, but we should also want to be around long enough to enjoy those careers.

No one is going to take better care of you than you.