Children’s Novel a Lifeline for American Soldier from CBS This Morning:

“A used paperback of Bridge to Terabithia was sent to Corporal Trent Reedy in Afghanistan.

“CBS This Morning contributor Lee Woodruff reports on how the book changed the lives of Reedy, the author and a young Afghan girl.” 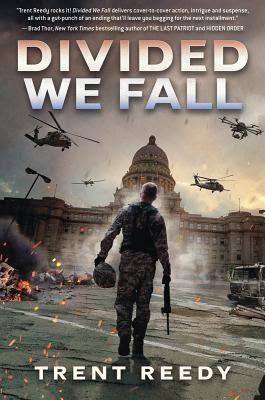 Trent’s new release is Divided We Fall (Levine/Scholastic, 2014). From the promotional copy:

Danny Wright never thought he’d be the man to bring down the United States of America. In fact, he enlisted in the Idaho National Guard because he wanted to serve his country the way his father did.

When the Guard is called up on the governor’s orders to police a protest in Boise, it seems like a routine crowd-control mission … but then Danny’s gun misfires, spooking the other soldiers and the already fractious crowd, and by the time the smoke clears, twelve people are dead.

Q&A with Trent Reedy by Michael M. Jones from Publishers Weekly. Peek: “The division that America faces is the result of groups of people who want the best for the country and for their children, but who disagree profoundly about what that America should look like. And so I was very careful to show the positives and the negatives of both sides.”

Interview with Trent Reedy: Author of Middle Grade and Young Adult Fiction by Kim Thacker from Bookshop Talk. Peek: “I wonder if it is possible that most middle grade novels are feelings books. And I wonder if a lot of boys have been trained, not to be without feelings, but at least to crave a little more action. Sometimes when I’m reading, I just want to rock.”