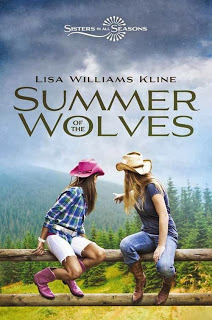 When my editor at Zondervan bought Summer of the Wolves (2012), my book about stepsisters in a newly blended family, and asked for three more books about the same characters, I panicked.

I had written the book several years before, so I hadn’t been “with” those characters for awhile. I hadn’t planned on returning to them. Many writers dream of getting a series, but I hadn’t.

When I started brainstorming, though, I found lots of ideas for more books. The first book had taken place on a family vacation. There were plenty of other interesting places I could take the family on subsequent vacations. The first book had featured an adventure with animals, and I felt confident I could come up with plenty of other animal adventures. I relished the idea of researching those.

But the most important element for the series was the relationship between the two girls. I recently read a thoughtful article in The Kenyon Review by Amy Boesky, a literary writer who has formerly written many books in the Sweet Valley Twins series, and she said the crux of the success of that series was that one twin was mischievous and fun-loving and rebellious while the other one was a rule follower. Almost every activity resulted in conflict between the two girls, and this was the axis upon which the entire series turned.

My girls were very different, too. Diana is physically bold but socially awkward and reclusive, while Stephanie is socially adept but physically fearful. By nature, if one girl is happy in a certain situation, the other is likely to be miserable. With almost any activity, my two girls were going to want opposite outcomes.

This may seem obvious, but if you’re interested in writing a series, developing characters with this inherent conflict in their personalities can help drive the action of more than one plot. The conflict won’t seem manufactured, but can naturally arise from who your characters are.

In the second book, Wild Horse Spring, the girls both like the same boy. In the third book, Blue Autumn Cruise, the girls go on a cruise with extended family members, one of whom is a cousin Stephanie knows well but Diana has never met. There is instant probability of “odd man out” conflicts.

Again, the need to create these relationship triangles seems obvious, but now that I understand the way that these character dynamics can drive multiple stories about the same characters, as a writer I have tried to become more intentional in my use of them.