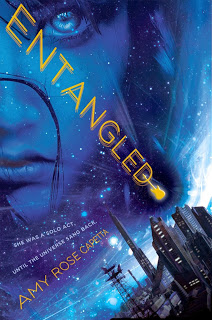 Amy Rose Capetta is the first-time author of Entangled (Houghton Mifflin Harcourt, 2013). From the promotional copy:

“Alone was the note Cade knew best. It was the root of all her chords.”

Seventeen-year-old Cade is a fierce survivor, solo in the universe with her cherry-red guitar. Or so she thought.

Her world shakes apart when a hologram named Mr. Niven tells her she was created in a lab in the year 3112, then entangled at a subatomic level with a boy named Xan.


Cade’s quest to locate Xan joins her with an array of outlaws–her first friends–on a galaxy-spanning adventure. And once Cade discovers the wild joy of real connection, there’s no turning back.

My pre-contract revision process had two and a half stages. The first stage was me giving the manuscript to one reader, doing a three week slap-and-shine on the rough draft and declaring it done, definitely done, ready for the world, no more consideration, deliberation, deepening, polishing, hair-pulling, or english muffins for dinner.

Here was my reasoning: the story was going out into the world, where it would encounter agents and editors, who would smear their brilliance all over it.

Stage one and a half came less than twenty-four hours later when I went Wait, no, wait, I think that’s wrong. It really was as dramatic as an all-caps parade. I walked around the winter-strangled streets of Chicago thinking No, seriously, don’t send it out, it will come right back. And not with gold stars on it. It will come back in pieces, like you patted it gently in the direction of the nearest serial killer.

I have the good fortune to be friends with Cori McCarthy, the endlessly talented author of The Color of Rain (Running Press, 2013), who went through her first experience with the publishing process one step ahead of me. I e-mailed her, hoping for the magical fourteen-second turn-around.

Lo and behold! Fourteen seconds later: she told me not to panic submit.

As soon as I had a name for it, I knew I wouldn’t be able to do it. I read a lot of fantasy. I believe in the power of names. And Panic Submit is not a pretty one.

Armed with this advice, I blocked off a few more months of my life, made peace with foaming a few thousand more lattes at Café Day Job, and moved on to step three.

I sat down. I made a list. Wait a second. I mean, I made The List. Because this was not a sedate, polite jotting-down of a few things I could do to nudge the manuscript into a generally better sort of shape. This was a wild feeding-frenzy of a list, a breathless collection of every single improve-able thing I could find—from structural issues to unfleshed secondary characters, right on down to metaphor overloads and words I love to use with the fire of a thousand redundant suns.

Then I sent the book back to its first reader, added three more, and stirred their own notes up with mine, mercilessly. When I sat down to work, The List was seventeen pages. Single spaced.

This, I could do. Not easily, or quickly. But The List, for all of its slap-dash, idea-strewn, sprawling nature, gave me a real metric for the progress of my revision.

I think one of the main differences between drafting and revision is that when you draft, you have the metric in front of your face, all the time. Word count, page count, is this chapter done? Word count, write a hypothetical cyborg makeout scene (to emphasize: not an actual scene from the book), The End.

You have a manuscript! You win drafting!

But revising can feel so nebulous. It shouldn’t, because you’re finally out of uncharted waters.

Now you have to chart the waters—again! That shouldn’t be hard! But pinning things down, at least for me, is harder than locating their vague general area. When I crossed an item off that massive list, I knew I had pinned something, even a small something. And as the list dwindled I could see that I was actually, substantially improving my manuscript.

Step three was hard to commit to. It is also, I am sure, what got the manuscript agent offers.

My post-contract revision process was wonderful, and it was also a different sort of challenge. It brought me into contact with one of those brilliant editors I had dreamed of working with. Her story notes are light. Deceptively light. They look like faint brushstrokes of suggestion, which could trick a writer into thinking there’s not much work left to be done.

The worst thing I could do, as a writer, is believe that. Those brushstrokes always point in the direction of some serious digging. When I rise to the challenge of my editor’s notes, really look at the implications and possibilities, I end up with a much richer story. 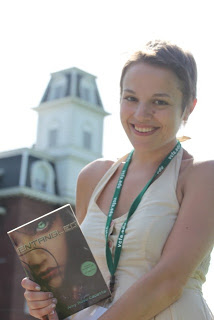 I had some of it swirling around in my head, gaining mass, before I started to write. I knew that my main character, Cade, lived on a desert planet. I knew that black holes were a source of endless rich weirdness, so I’d have to include one.

I felt a deep and abiding love for the spaceships in some of my favorite sci-fi stories, so I knew that my spaceship had to have character. What I didn’t know was how much character. She ended up stealing a lot of the scenes.

The central concept of quantum entanglement was there from the start; it slapped together the other aspects of the book in my head, like high concept superglue. I read about it and talked to Julia (my best friend and favorite scientist), and got all nerdily excited about this theory that particles (and therefore, maybe people) can break all of the laws of the universe, and communicate faster than the speed of light.

If it was strange enough to freak out Einstein, it’s interesting enough for me.