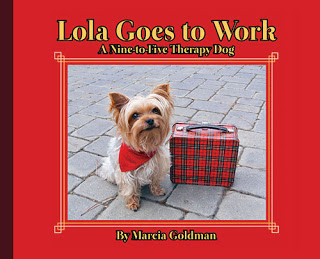 Marcia Goldman is the first-time author of Lola Goes To Work: A Nine-To-Five Therapy Dog (Creston Books, 2013). From the promotional copy:

Meet Lola, a little terrier with a big job. Children will identify with the feisty Lola as she struggles going to school, passing tests, and finally achieving her Big Dog dream.

When I retired a few years ago from teaching, I was eager to slow down, and I figured I would know what I was supposed to do next when the time came. 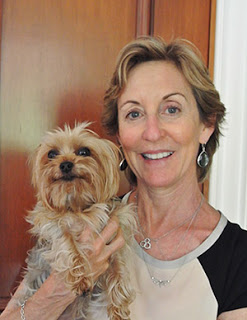 One day, I had an epiphany. I love my dog, a five-pound yorkie, I spent 30 years as a special education teacher, and if I combined the two, what better way to legitimize spending all day with my dog?

I knew about therapy dogs, but I didn’t know if only certain breeds were used or how one became trained and qualified.

When I first thought about Lola becoming a therapy dog, I was told that she was probably too little and probably not suitable. I am glad that I didn’t listen, because she is very good at her job.

Lola and I had been visiting a preschool program for children with Autism. She and I would greet the children during circle time, and then I would read to them.

I realized how much more impactful it would be for the children if they heard a story about the dog that was right in front of them! I wanted them to be able to listen to a story about a dog while actually seeing and petting one. I looked online and in bookstores, but I couldn’t find anything that had a dog that looked like Lola.

I also knew that, for children on the spectrum, photographs would be more meaningful than illustrations. I decided to create my own book!

I had never written a story book, nor was I very good with a camera, but the children were my inspiration and Lola was a willing participant with a little help from doggie treats and string cheese.

It started out as a home project with only two copies, one to leave in the classroom and one for me. But with guidance and encouragement, the original plan turned into a wonderful writing adventure for both of us. 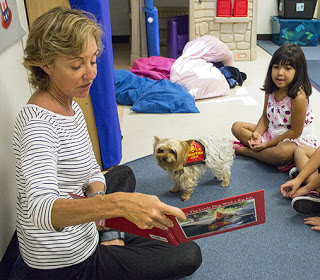 Being a teacher and having spent the last 30 years working with children on the Autism spectrum, my inclination was to tell the story in simple sentences that would resonate not only with children, but with their teachers and parents too. It has a simple and clear story line with only one or two sentences per page and photographs rather than illustrations.

Lola has a lovable face and an indomitable spirit that makes you want to cheer her on, so it seemed natural to let the story be told in her voice.

I also wanted her story to have teachable moments. Lola’s story is of a dog that was told that she was too little to have the job she wanted. It is about having a dream and having to work hard to achieve it. She could have given up, but instead she worked extra hard to prove that she had the right stuff to be a therapy dog, even if she was small.

Lola’s story not only shows how she made her big-dog dreams come true but also how helping others makes you feel good inside. It is a story about believing you can do something, working hard to achieve it, and making a difference.

The teacher in me hopes that it will be a book that parents and teachers want to read to their children and be waiting for the next Lola book and the next story she has to tell.