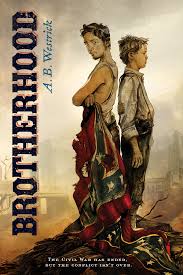 A.B. Westrick is the first-time author of Brotherhood (Viking, 2013). From the promotional copy:

By day fourteen-year-old Shadrach apprentices with a tailor and sneaks off for reading lessons with Rachel, a freed slave, at her school for African-American children. By night he follows his older brother to the meetings of a brotherhood, newly formed to support Confederate widows and grieving families like his.

As the true murderous mission of the brotherhood—now known as the Ku Klux Klan—emerges, Shad is trapped between his pledge to them and what he knows is right.

In this unflinching view of the bitter animosity that stemmed from economic and social upheaval in the South during the period of Reconstruction, it’s clear that the Civil War has ended, but the conflict isn’t over.

I drafted Brotherhood in first person, present tense, but on revision changed the manuscript to third person, past tense. Such a difference!

I love to draft in first person-present because it’s intense. It’s arresting. First person-present forces me to enter into my protagonist’s world and imagine his actions as if they are happening right now: I smell what he smells, and touch what he touches. I taste, see and hear the specific, concrete moments of his life.

To some extent, I experience his emotions while I’m writing, and can observe exactly what my own body is doing. Am I breathing or holding my breath? Curling my toes? Clutching the edge of my desk? Chewing on the inside of my lip… or my fingernail… or a pencil eraser?

First person-present demands a sense of immediacy that’s honest and real, and forces me to shed stereotypical concepts of who I think this character might be or become. Instead of an idea or symbol or construct, he becomes an individual.

But my first person-present version was over the top! My protagonist is an illiterate 14 year-old boy whose awful grammar is difficult to read. Sure, I created a strong voice with an honest cadence rolling on the page—I could hear him speak—but the choppiness of the dialect detracted from the story. I had to let it go.

I decided to keep his Southern dialect in passages of dialogue, and remove it from narrative sections, and I rewrote the story in third person. But even in the dialogue, there were times when I cleaned up the words, knowing that once the lilt of his speech was established, the reader would supply the Southern accent organically. Readers would hear him; they’d get it.

So for example, instead of writing something like, “we gonna git ’im,” I’d spell it correctly (“we’re going to get him”) and leave the pronunciation to the reader.

(By the way, it was my advisor at VCFA, Kathi Appelt, who helped me wrestle with these tense and point of view changes. Oh, that we could all have critique buddies like Kathi Appelt!)

When I switched to third person, I considered omniscient third, and decided that it created a greater sense of distance and perspective than I wanted. So I re-wrote in close-third. When the protagonist learns something, the reader learns it simultaneously and not before.

I’m a debut author, so I’m still figuring out the business, and there’s a lot to figure out! You can put your whole day, every day, into social media and book promotion, but if you don’t love the process of writing, if you don’t write for the story and the language and the characters, and instead you write only for the business, well, I don’t know what to tell you. I wouldn’t be able to do it. For me, the writing of fiction comes first, the business second.

How did the MFA help me with the business? It helped me improve my writing! And when I was ready to pitch my manuscript, mentioning the MFA piqued my agent’s interest. But the writing had to speak for itself.

I remember that in my first phone call with the woman who is now my editor, she asked if I’d be willing to make significant revisions to the manuscript, and I said, “Yes, by all means.

After Vermont College, revision is my middle name.” Or I said something like that. (You know, I have no idea what I said. It was my first-ever conversation with a New York editor. I think I babbled a lot.)

But my point is that I think she felt better about taking a risk on me—a debut author, no track record—knowing that I had an MFA. The degree reassured her that I would approach revision requests professionally.

But even with the MFA, I think there’s a “don’t quit the day job” mentality in the world of writers, and that’s probably good advice. Writing doesn’t necessarily pay the bills. Many authors supplement their royalties with speaking engagements.

To aspiring authors, I’d say: don’t get an MFA because you think it will help you with the business. Get an MFA because it will make your writing better and will challenge you, and you’ll have to write so much that it will help you decide whether you’re cut out to be a writer. Whether you enjoy hours spent alone. Whether you love the process. Because if you don’t love it, and if there’s anything else that you could be happy with and make money doing, I’d suggest that you consider seeking the other thing rather than writing.

Of her workspace, A.B. reports, “I grew up with that lamp,
and inherited it when my parents downsized to a retirement community. My daughter did the painting over my desk; it’s her illustration of Mark Mathabane’s autobiography, Kaffir Boy.
(My daughter is a painter, living in Brooklyn.) The starfish inspires
me, the heater warms me in the winter, and books pile up faster than I
can read them.”

A.B. won the SCBWI Book Launch Award. She says: “My winning proposal included the plan that I would get students to write, revise, rehearse and record stories in the format of NPR’s ‘This American Life.’ Then I’d post the recordings on my website. I’ve had a blast doing this! My website now includes a page called ‘Students’ where you can listen to students reading their own writings.”

One Reply to “New Voice: A.B. Westrick on Brotherhood”