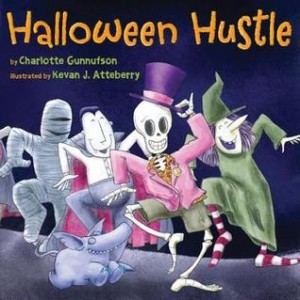 Charlotte Gunnufson is the first-time author of Halloween Hustle, illustrated by Kevan J. Atteberry (Two Lions, 2013). From the promotional copy:

In the dark, a funky beat. Something white with bony feet. Skeleton dancing up the street, doing the Halloween Hustle.

Skeleton is dancing his way to a Halloween party—but as he grooves across town, he keeps stumbling, tumbling, and falling apart!

Can Skeleton stay in one piece long enough to make it to the party?

Surprised to debut in 2013? Thrilled!

Did it seem inevitable? No. Still, part of me believed it would happen, that it had to happen, because once I started writing again, I knew I couldn’t give it up.
I re-began writing in 2007, just before my 41st birthday.

I’d been published before. A poem about a duck. In an Archie’s comic book. Way back in elementary school. I wrote through my teens and into my mid-twenties. Then, I stopped writing for fifteen years for good reasons and poor excuses.

I stayed up late one night watching “The Pursuit of Happyness,” the story of a homeless father who struggles to find security for himself and his son. When I turned off the TV, I thought, “I have been such a whiner.” The next day, I re-began writing.

When that story, along with several others, didn’t get plucked from the slush pile, I decided to establish myself writing poems for children’s magazines. Easy peasy. Almost there. 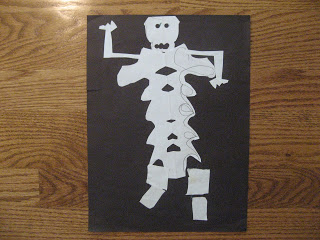 That fall, having failed to sell a single line, I had an idea: I’d submit a craft project accompanied by a poem. Among the Halloween decorations, lay a skeleton Isaac had made in second grade. The dancing skeleton poem grew too long to be a poem.

I couldn’t decide what to cut. I wrote a story instead.

In 2009, February 16th according to my “Submissions Record” spreadsheet, I sent Halloween Hustle to several publishers. A familiar thing happened.

But my first poem was accepted for publication in early 2009. Whew! Almost there.

In March, 2010, more than a year after I’d submitted the manuscript for Halloween Hustle, an editor from Marshall Cavendish sent the manuscript back. With whole pages crossed out. With lots of notes. With a letter saying it had potential for their list.

I revised and re-revised and on April 23rd, two-and-a-half years after I’d re-begun, Marshall Cavendish acquired Halloween Hustle. Initially, the editor thought it would be published in the fall of 2012, but because of the illustrator’s busy schedule, the date was pushed to 2013.

Basically, now. Am I there, yet? 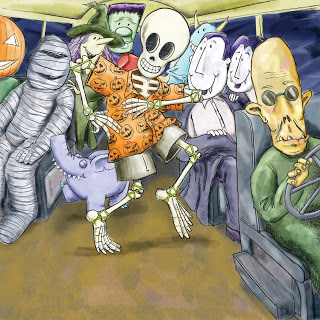 Six years have passed since I re-began writing. Many things have happened. Some things haven’t.
I’ve written a few hundred poems and short pieces and sold just over thirty of them. I’ve been lucky enough to have my work appear in Highlights, Highlights High Five and Hello, Cricket, Ladybug, Jack & Jill, Humpty Dumpty, and Turtle magazines.

Marshall Cavendish was acquired by Amazon. I still have my wonderful editor. Illustrator Kevan Atteberry has generously shared his work with me to help promote the book. We’re Facebook friends. I’ve written dozens of stories. I haven’t sold another manuscript.

In Halloween Hustle, Skeleton falls down and falls apart, but…

Binds bones together with tape and twine.

Skeleton dances like he’s never going to fall down or fall apart again. That’s not foolishness. That’s the sort of faith writers have to have.

I’ve said “The Pursuit of Happyness” inspired me to re-begin writing. It also keeps me going. The movies final message: life is not about achieving happiness but pursuing it.

The joy truly is in the journey. A while back, I was listening to NPR and a guest cited a study which found we are happiest not when we’re so far from our goal that it seems unreachable and not, surprisingly enough, when we reach that goal. We are happiest when we are almost there. 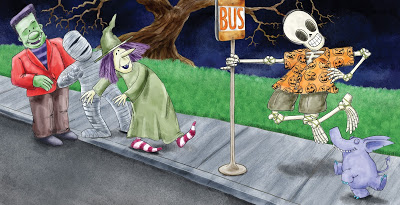 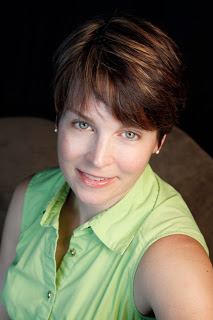 How am I promoting Halloween Hustle?

Leaping in and learning as I go! With as much time and energy as can possibly be spared from family, friends, sleep, and, yes, writing.

Here’s why: When Halloween Hustle was acquired in 2010, after two-and-a-half years of struggle, I thought I’d strolled onto Easy Street on my way to Piece of Cake Café.

Nope. Despite a few maybe-um-nos to some other stories, I haven’t sold another manuscript.

I’m determined to think of this as a blessing in disguise. If I had another book waiting in the wings, I don’t think I’d be as dedicated to the success of this book. Halloween Hustle is an only child. I’m the helicopter parent.

My macro-strategy: Tap into what makes the book unique and then promote it in way that’s unique but still feels natural.
My micro-strategy: Create a big buzz with lots of little bees. Preferably—pun alert!—free bees.
(Any advice I can offer is sprinkled throughout and aptly humbled by parentheses.) 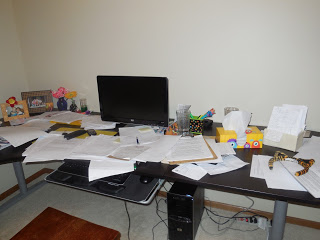 I’ve researched kid-lit blogs where my book might be reviewed. (Start now! There are oodles of terrific blogs and you can accidently learn a lot from them.)

Then, as professionally, politely, and enthusiastically as possible, I asked bloggers if they’d be open to receiving a copy of my book for review. (One of my biggest I-must-be-on-Easy-Street mistakes: Assuming that bloggers would be delighted to review my book. After all, it’s free! Reality check: Bloggers are busy. They are inundated with requests. Read this perfect primer.)

I hired a designer for my website. But before this, I examined scads of author websites, asking myself, what works? What doesn’t? What do kids, parents, grandparents, teachers, librarians, booksellers, etc., want in an author website? 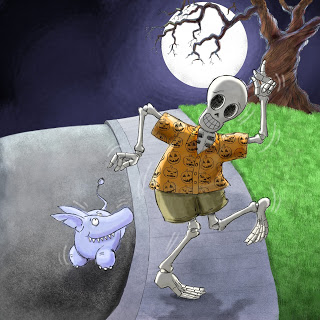 I “met” my designer, Taylor Ridling, on LinkedIn. I looked at her work, sent a comprehensive plan, and signed a contract. (Develop a vision for your website. Get a contract with a completion date.)

I wrote the trailer “script” and song “lyrics.” Then, I hired the ridiculously talented Alisabeth Von Presley to create the book trailer and dance video. Dance video? That’s what I mean by “unique but still feels natural.”

Attendees are invited to do the “Halloween Hustle” and favorites like “Monster Mash” and “Purple People Eater.” I’m adapting the event for various venues.

Am I enjoying the process or does it seem like a chore?

On “Dancing with the Stars,” contestants say they knew being on the show would be hard but it’s so much harder than they ever dreamed—and so much more fulfilling.

That’s how promoting a book is. Exhilarating. Exhausting. I feel confident and clueless by turns. It’s a bit like being a (helicopter) parent.

(Figure out what makes your story unique and run with it! Think big! Study hard! Start early! Ask your critique group for ideas and support. If you can’t pay them back, then pay it forward.)