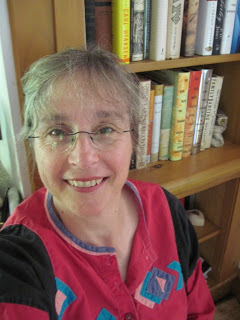 When I was a wee girl in Massachusetts, I woke up one morning to find a Ginormous Hairy Spider dangling inches from my face, legs waving.

(Actually it wasn’t hairy at all and probably was a half-inch in diameter, legs included. But I’m not a fantasist for nothing.)

This was the start of a lifelong aversion. Objectively, I know that spiders are beautiful and an important part of our ecosystem. But they’re sneaky—they appear out of nowhere. I don’t like the way they scuttle. You never know where they’re going.

If you swat one, your name goes on the revenge list in the collective spider unconscious. I’ve been swatting for a lot of years. There’s an arachnid fatwa out on me, I just know it.

Some time ago, now living in Maine, I was varnishing a bookcase, my nose an inch from my brush, when a Ginormous Hairy Spider lunged at me from a back corner of the shelf. There was no mistaking the malice. My partner Rob heard my shriek even though he was outside with an idling chainsaw in hand.

Similarly, I do not like snakes (they ooze), heights (I’m afraid I’ll jump), or closed-in spaces (hey, I use a lot of oxygen). 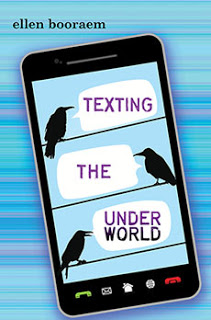 I am not proud of my fears—they’re irrational, and I want them gone. So, as I developed Texting the Underworld, my latest middle-grade fantasy, I gave all of them to my hero Conor O’Neill. I figured researching and writing about them would illuminate my psychological shadows with the glorious light of science.

Although it’s funny a lot of the time, Texting the Underworld is about fear. A young banshee (an Irish harbinger of death) turns up in 12-year-old Conor’s bedroom to say that someone in his family’s about to die, and she’ll just sleep in his closet and wait for it. Conor, timid by nature, gets his courage up to visit the Underworld in an attempt to head off the death.

At various points, the poor kid confronts spiders, snakes, heights and closed spaces. And all because he chose the wrong author.

To get Conor through his troubles, I needed to know how it would feel if a tarantula crawled onto your hand. At the same time, I was fooling around with another story that required an intimate knowledge of spider anatomy. The opportunities for my self-improvement were endless.

At first, Google was a godsend. Terrified that my authorial conscience might drive me to actually touch a tarantula, I was ecstatic to find that some fool out there had let one of the hairy monsters crawl onto her hand. She described this in great detail. Once I stopped shuddering and compulsively hand-washing, I was grateful to steal her experience. 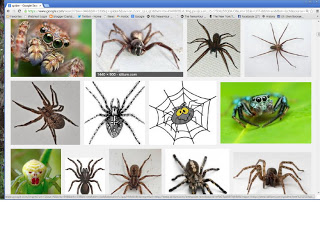 I was less happy about my anatomical research. Google “spider” and hit “images,” and suddenly—like a spider lunging at you from a dark bookcase—your screen is full of pincers and multiple eyes and hairy legs. Turns out spiders are even scarier at an intimate distance.

Researching Conor’s (and my) other fears, I watched a video of a Burmese python eating a rabbit. I peeked over cliffs, took a harrowing car ride through Colorado’s San Juan Mountains. I shut myself into a dark closet.

I emerged no more rational than I was before—in fact, knowledge had made me worse. I now knew what horrors lurked beneath those scuttling legs. And I still had poor Conor to contend with. At every turn in his story, I had to imagine a spider encounter, being way up high, being closed in. A snake attacking a rabbit.

I’m shuddering as I type this.

My life continues to be constrained by my fears. I kill every spider I meet, sure that it is an agent of the fatwa. I whimper when a small, innocent garter snake slithers through the garden. I will never get to hang-glide, and will never visit the Carlsbad Caverns.

And yet, the experiment was not a total failure. It left me with one solid fact:
I will never write about zombies. 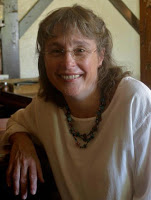 Ellen Booraem’s Texting the Underworld
(Dial, 2013) is a middle-grade fantasy about a scaredy-cat South Boston boy and a
determined young banshee.

Her earlier middle-grade fantasies are Small Persons with Wings (Penguin/DBYR, 2011) and The Unnameables
(Houghton Mifflin Harcourt, 2008).

She lives in coastal Maine with an
artist, a dog, and a cat, one of whom is a practicing curmudgeon. She
blogs at The Enchanted Inkpot.

Enter to win one of two copies of Texting the Underworld by Ellen Booraem (Dial, 2013). Publisher sponsored. Eligibility: U.S.

6 Replies to “Guest Post & Giveaway: Ellen Booraem on Kill Your Fears By Writing About Them! (Yeah, Right.)”