Her most recent novel is Chime (Dial, 2011), a National Book Award Finalist. She was on the faculty of Vermont College of Fine Arts until the summer of 2012, when she moved to Mexico.

She now works with private students and offers a semester of private study, modeled on the low-residency MFA programs, in addition to manuscript critiques. In addition, Franny has a particular interest in speaking to school groups in Texas. To contact Franny, please email frannybillingsley@gmail.com.

I’d planned to begin by quoting Henry James on the plot-character connection, but I soon realized I’d better clarify something: Henry James isn’t the old dog I refer to above. I am. I’m old and I’m dogged—old enough to have first read the James quote about twenty years ago, dogged enough to have explored it ever since.

Here, then, are James’s famous words. “What is character but the determination of incident? What is incident but the illustration of character?” 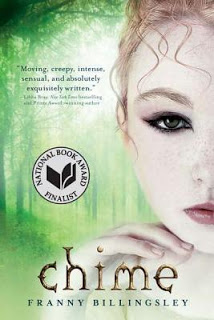 Over the years, I’ve developed a schema that helps me analyze the plot-character connection. It examines, among other things, the character’s “controlling belief,” which is what the character believes about herself and/or about her world. It’s best illustrated by example.

Let’s look at Briony, the protagonist of my most recent novel, Chime (Dial, 2011). Let’s look at her history.

Briony not only filters her view of the world through the lens of this belief, she acts on it: Her controlling belief (character) drives the narrative (plot).

So here I am, the old dog, gnawing on the plot-character bone. What, then, is the new trick?

I chewed on it, and slept on it, and one morning I awoke with an idea.

What if, in the crisis moment, the character were to act against her controlling belief? That could be a powerful turning point in a novel, moving the plot ahead while showing how the character has changed.

I then realized that Briony does exactly that. I hadn’t planned it—some sense of structural rhythm must have led me there—but indeed, in the crisis moment of Chime, Briony does act against her controlling belief. It’s a strong plot development; I’ve since come to think it’s a big part of what makes the novel work.

To explain: In the chapters leading up to the crisis, Briony is forced to reveal she’s a witch. This revelation, in turn, forces her to flee her village—if she’s caught, she’ll be hanged. But her path intersects with that of the romantic hero, who’s been mortally wounded. She could leave him to die or she could take him back to the village and save him. If she listened to her controlling belief (Wicked! Selfish!), she’d leave him to die. But instead, she takes him back to the village, where (as she thinks) she’ll be hanged.

As it turns out, it’s this very action that unlocks the truth about her past.

During the last six months, while I’ve been learning this new trick, I’ve also been working on my new novel. But it wasn’t until this past week (while I’ve been writing this guest post) that I realized something kind of horrifying: I haven’t thought about whether I should turn my new character against her controlling belief. I haven’t contemplated it for even a second.

So I played out the possibility: Yes, good things would happen if my character were to act against her controlling belief. Well, they’d be bad for the character but good for the story.