Registration is now open! Seating is limited. The speakers are:

You’ve written picture books, short stories and novels. What made you decide to try graphic novels?

I’ve been reading what we now call graphic-format literature—or comic books—since toddlerhood. My father worked six days a week, Monday through Saturday, but on some Sunday afternoons, he would load me into the front seat of the Oldsmobile and drive me to the local convenience store to pick up superhero and science fiction comics. (I also liked horror comics, but those were harder to find.)

It was an opportunity to spend time along with him, even if it was less than a half hour, while he also was trying to juggle time spent with my mother, the extended family and working on the house and lawn.

So some of my affection for the format is nostalgic—I feel for it the way a lot of adults do about the picture and prose books they read as children (as a regular school-and-public library kid, I read those, too).

After a break in high school, I began picking up comics again in college and then dived in with gusto from law school on, subscribing to more than fifty books a month. The format was finding its footing.

A greater variety of books, including more sophisticated titles, was becoming available, though I still enjoyed the art and storytelling in superhero comics—a classic American form, if there ever was one.

We tell beginning writers to read, to study form. To read hundreds of any particular type of book before trying to write one. I’d been doing that with comics for as long as I could remember. These were among the books that taught me how to read. Having consumed thousands over a lifetime, I instinctively understood how they flowed and delivered.

I talked to my agent Ginger Knowlton of Curtis Brown, Ltd., who pitched the idea to my editor, Deborah Noyes at Candlewick Press. I put together the first script, and—after we all consulted online portfolios—my text was matched with illustrator Ming Doyle, who had a background in comics.

Tell us about your graphic novels and how they relate to the Tantalize series.

The graphic novels are Tantalize: Kieren’s Story and Eternal: Zachary’s Story, and they retell the prose novels, Tantalize (2007) and Eternal (2009), which I think of the gateway novels to the series.

Either Tantalize or Eternal can be read first, and then the two casts crossover in Blessed (2011), which, in turn is followed by Diabolical (2012).

All of the books can stand alone. They each have a complete arc with a beginning, middle, and end, though Tantalize and Blessed are perhaps the most tightly tied as the latter kicks off in the moment the former leaves off.

That said, the graphic novels are not simply a straight adaptation of their corresponding prose novels. In addition to showcasing Ming’s wonderful art, they also offer readers new scenes and previously existing scenes from a new point of view. Again, they’re not dependent on the series as a whole, but dedicated readers will certainly find much to reward their enthusiasm.

How did you learn how to write a graphic novel? 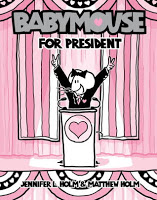 Again, foremost by having read and studied thousands of them over a lifetime of reading.

I also had been paying attention to the rising role of graphic format in children’s-YA literature.

Some of my favorite books are the Babymouse series by Jennifer and Matthew Holm (Random House. 2005-), Joey Fly, Private Eye by Aaron Reynolds and Neil Numberman (Henry Holt, 2009), and the hybrid prose-graphic novel So Punk Rock And Other Ways to Disappoint Your Mother by Micol and David Ostow (Flux, 2009).

Format preferences vary from publisher to publisher, so Candlewick sent me a couple of models to study.

I also studied overviews of the format and how-to books by folks like Stan Lee, Alan Moore, Dennis O’Neil and Scott McCloud.

Having been a picture book writer also was helpful. I was used to writing visually and had no ego resistance when it came to putting the art at center stage. My motto: get out of the way of the illustrator!

What were the challenges in moving to graphic novels for the first time? And did they get easier with your second book in the format?

With Tantalize: Kieren’s Story, I originally included too much text. When the early sketches came, I wanted nothing more than to slash and condense—to leave more room for Ming’s art.

Definitely, Eternal: Zachary’s Story went smoother. I had more experience and more of a sense of Ming’s style, and how she would translate the story into art. I’d also been through the process before and had more faith and confidence in it.

In both cases, my editor and I spoke on the phone for hours, going over the sketches, panel by panel.

Teen readers have been enthusiastic. The series has both male and female protagonists and attracts a dual-gender audience. Many are visual and reluctant readers.

In much the same way that the prose novels Tantalize and Eternal are gateways to the series, their graphic novel adaptations serve not only that purpose but also can encourage graphic-format readers to crossover to prose fiction.

A half dozen or more readers (all of them boys) who started with one of the graphic novels have told me that, afterward, its prose companion became the first prose novel they’d ever finished.

More have said that reading the graphic novels inspired them to read the prose versions by choice—something they previously would’ve only done if the books had been school assignments.

I’ve also heard from prose readers of the series that they were inspired to try graphic format for the first time. This is just as important.

Visual literacy, processing visual communications cues, is ever more important in our increasingly global business and cultural exchanges, in our increasingly media-centric society. It serves as a foundation for analytical and interpretive thinking. As a life skill, it’s priceless.

Do you plan to do more graphic novels?

Not in the short term. I fully enjoyed the process of creating both graphic novels, but at the moment, the projects calling loudest to me are best suited to prose format. That said, I remain an avid reader and would certainly consider another graphic-format (or hybrid project) in the future.

Would you recommend graphic novels as a format to other writers?

I would—with the caveat that it’s still relatively new territory in traditional children’s-YA trade publishing. Some great work is being done, and teens love the format. But we’re still in the process of educating the wider community of grown-ups. 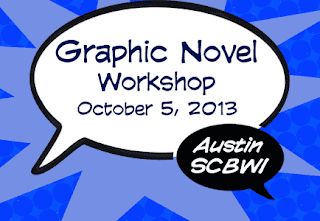 Finally, can you give us a sneak peek at what you’ll teach us at the Austin SCBWI Graphic Novel Workshop on Oct. 5?

“Breaking Down Story: Adapting Prose Writing to a Graphic Novel Script.” How to take already written novels and turn them into a script for a graphic novel. Note: I’ll also be sharing a few insights gleaned from other creators on collaborative graphic-format projects.

“Story Creation 101 for Illustrators, New Writers & Forgetful Authors.” A nuts-and-bolts look at how writers build story from the ground up with group exercises and participant readings/show-and-tell.

Samantha Clark writes middle-grade and young adult stories and is the regional advisor for the Austin chapter of the Society of Children’s Book Writers & Illustrators. A journalist and editor for 20 years, she also works for Yellow Bird Editors.

The Feral trilogy (Candlewick) is a spin-off of the Tantalize series, and Feral Nights (Book One)(Candlewick, 2013) is now available. The books set in this world also are available from Walker Books in the U.K. and Walker Australia and New Zealand (among other publishers from around the globe).