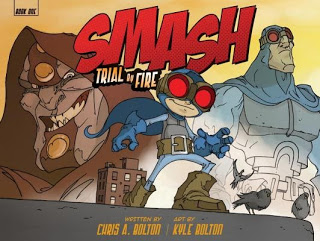 By Chris A. Bolton
for Cynthia Leitich Smith‘s Cynsations

How do you make a graphic novel?

Short answer: any way you can!

Much like eating a Reese’s Peanut Butter Cup, there’s no wrong way to do it (as long as it gets done). Unlike, say, screenwriting — where the format is extremely specific, and there are countless books explaining all the rules and guidelines — each comic creator uses whatever method works best for her, personally.

When my younger brother Kyle and I decided to make our long-gestating idea about a ten-year-old superhero named Smash into a real, live comic, we explored several possible methods for working together.

What seems to work best is for me to outline the plot in broad story beats so we’re both clear on what’s happening. For instance, here’s part of my outline for the second Smash book, which we’re working on now:

After a brief recap of Book One in a news report (being watched on ZEKE’S smartphone), we follow small-time crook ZEKE HUSTON to a midnight meeting at an abandoned Air Force base. DR. COBB — who built the machine that absorbed SMASH’S powers in Book One — waits with the suit he’s designed, one that uses electromagnetic bursts to propel the wearer at great speeds, like a bullet. ZEKE attempts to steal the suit by booby-trapping a gym bag supposedly full of money, but COBB’S gigantic henchman BRUTE unwittingly sets off the explosives too early. ZEKE hurriedly dons the BULLET armor and fights off BRUTE to (barely) make his escape. An injured DR. COBB promises they’ll get even.

When I’ve finished the outline (for Book 2, it totals eight single-spaced pages), Kyle reads it over and gives feedback.

Sometimes he doesn’t like a plot element or the way a scene plays out. He might want to move a chase from a freeway to a dockside shipyard, for instance, or he might disagree with the way I’ve handled a plot twist.

Now we have to talk it out.

Our general rule is, if one of us has a problem with a scene, we bat around ideas on how to fix it or change it so it works better. The new version of the scene that comes out of these discussions is always, always better than what we started with.

Once we agree on the outline — usually after at least a few revisions — I get started writing the script, which is a breakdown of the action in each panel on every page, plus the dialogue.

When we first started putting Smash together, I favored taking an old-school Marvel Comics “plot first, script later” approach. In that instance, the writer jots down a big paragraph of all the action that occurs on the page (not unlike my outline excerpt above), then hands it to the artist to break down into panels, angles, and specific actions. When the artist hands back the finished comic page, the writer scripts the dialogue to fit what she’s been given. That certainly helps with problems like writing a long, passionate monologue for a panel so crammed full of action and detail that there’s only room for a two-word balloon.

However, in our case, Kyle wanted the panels to be broken down for him — and, frankly, I wanted to be able to help set the tone and pacing of the layout. What a comic panel contains, how big it is, even the number of panels per page are all important storytelling tools in the comic form.

So, after much searching around the internet, we settled on a script format that we liked, which looks something like this: 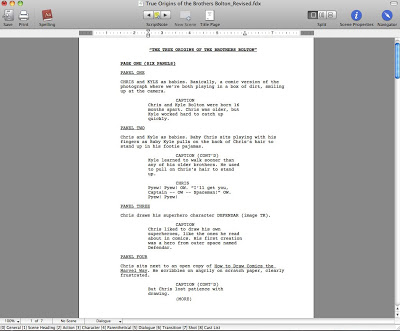 I use a specialized template in my Final Draft screenwriting software for ease (it does a great job of positioning all the dialogue and character names with just a single tap of the TAB key), although it would be easy enough to write this in Word.

I note the total number of panels for each comic page at the top of the script page, so Kyle has a general idea as he starts to read. Then I describe each panel, providing the dialogue, captions, and sound effects. Things don’t always work out the way I script them, of course. Sometimes Kyle calls me with a new idea, other times he might find he can’t fit all 15 panels onto a single page of comic book paper without reducing the characters to half a face and a couple of fingers.

Sometimes there just isn’t enough room for all the dialogue I wrote, or there isn’t as much need because Kyle’s expressive style gets the point across without any excess words. In that case, I’ll make alterations while I’m lettering (more on that in a bit).

Kyle draws by hand on a drafting table, using professional comic book paper from Blue Line Pro, which is 11″ by 17″ acid-free paper that has the borders of the finished comic page already printed on them in blue. The pages he draws come out much larger than the actual printed page of the comic, which allows him to draw in a more detailed fashion. 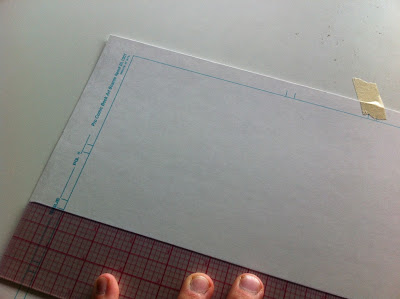 When it comes to drawing, Kyle doesn’t get all fancy with a Cintiq tablet or anything like that. He does it all by hand, old-school-style, on the drafting board he’s had since seventh grade, using a 0.5mm mechanical pencil with 2B lead and a Strathmore eraser. 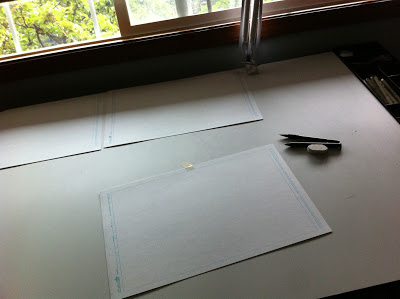 For our first book, Smash: Trial by Fire, we wanted a sketchy quality to the art, so Kyle didn’t ink the pages. He just drew a darker line over his sketches with a harder-tipped pencil. However, he had to push down really hard to make the line dark enough to see and scan into the computer — which actually ended up causing some nerve damage to Kyle’s wrists. As a result, for future books he’s decided to ink his pencils using Micron pens of varying ink weights ranging from .02 to .08.

To start with, Kyle gets to work sketching from the script. Because he isn’t fond of doing thumbnail layouts, he starts with very light pencils. He sketches the outline of the characters and their action; they practically look like stick figures at this point.

When he’s happy with the positions and the size of the panels, he starts filling in the rough sketches with details, adding bulk to the bodies and working on facial expressions. 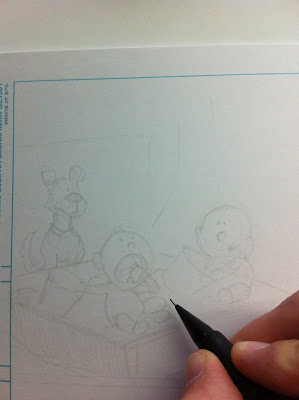 Around this time Kyle will take a camera-phone picture of the page or a given panel and send it to me. I’ll look it over and give him feedback: “Wow, looks great!” or, “I can’t quite make out what that is” or, “Can we try a different angle?” Once we agree on the pencils, he starts inking. 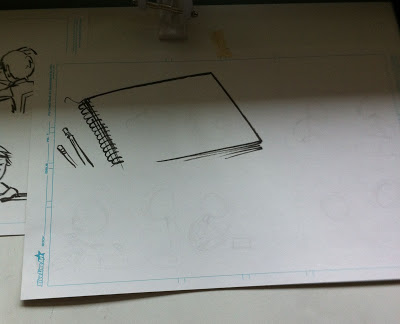 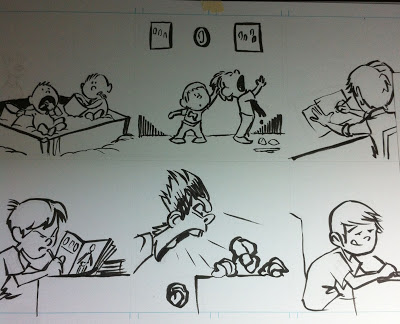 The next step is lettering the pages, where we add all the dialogue and thought balloons and the caption boxes (like “Meanwhile…”). Kyle scans his finished pages and sends them to me. Our letterer, Christina Mackin, uses a program called Adobe InDesign to draw and position the balloons in the panels. We have two special fonts for the comic, both from BlamBot.com: Anime Ace 2.0 for dialogue, and Badaboom for sound effects. (These fonts are free to download for personal use, although our publisher, Candlewick Press, paid a licensing fee to use them for the printed book.)

Finally, the pages are colored using Adobe PhotoShop. The easiest method would be to pick a color and use the paintbucket feature to fill in a whole section, such as Smash’s glove or mask or goggles. However, because Kyle only sketched in the art with pencils instead of using solid ink lines for Trial by Fire, the lines were often rough or incomplete, which meant clicking on paintbucket could fill the entire panel with one color instead of just the gloves.

So Christina, who was also one of our colorists for the book, had to painstakingly color in every piece of the panel, much as you would the pages of a coloring book. She laid down the flats (a basic wash of all the colors) and then the pages were passed along to Sarah Barrie Fenton, who added shading, highlights, and visual effects. With the use of finished inks from here on out, the coloring should be much faster and easier for future books. 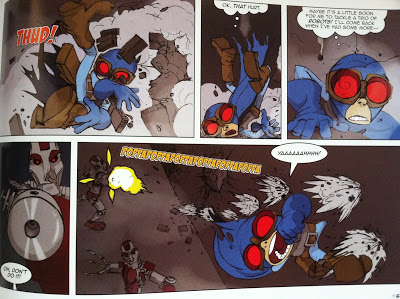 That’s our process! Thanks for reading! We invite you to pick up a copy of Smash: Trial by Fire and see for yourself how the process comes together in the final result.

Check out other stops on the Smash: Trial by Fire blog tour.

Enter to win one of three copies of Smash: Trial by Fire by Chris A. Bolton, illustrated by Kyle Bolton (Candlewick, 2013). Publisher sponsored. Eligibility: North America.