The end of May is the time to be in Singapore for any writer or illustrator of children’s books.

Why? Because the weather is hot, dry and summery (with just the possibility of a brief shower), there is glorious food to be sampled (especially in the open air food malls), great shopping to be undertaken and even more importantly the end of May is the time when the Asian Festival of Children’s Content (AFCC) is up and running.

Hosted by the National Book Development Board of Singapore (NBDB), AFCC is a conference for those book creators who are just starting out as well as for those who are well established in the genre. The Asia Pacific region is a huge and growing region for quality English language children’s books so it is vital to know what is happening with books and publishing in this part of the world.

This year, 2013 was the fourth year that it has been in this amalgamated format; it was previously separate festivals for book creators and for multimedia. Two other components of the conference are one day for parents and another for teachers with content geared towards that target audience.

Like all new great festivals AFCC is growing and evolving. New tracks within the conference and seminars have been added and there has been increased exposure to multimedia and social networking. Presentations on style, craft, content as well as a day of workshops are core components of the festival as well. The seminars offer specialised sessions that focus on specific aspects of the literary community, this year including sessions on young adult literature, translation of children’s books, blogging and book reviewing.

But it isn’t only the traditionally published book. There is a large multimedia and transmedia strand to the festival with workshops and seminars and demonstrations as well.

But the Writers and Illustrators Conference, which runs over two days, is of primary importance with sessions that include writing narrative nonfiction, picture book art, writing series books, social media for authors and illustrators, marketing books, selling rights and, of major importance, publishing and distribution in Asia.

With English being a second language in the region, but of major importance all over the region, sessions on bilingual publishing and translation are integral to this festival. Indicative of the importance of English it the region the Association of Southeast Asian Nations (ASEAN), an inter-regional government political and economic organisation promoting peace and security which comprises ten nations within the region and their dialogue partners has the official working language, English.

For creators of children’s books, Asia is a huge market. The region has hundreds of millions English speakers – more than the first-language English speaking world. Many of the countries in this region require students to study English, so the publishers and the education systems here are on the lookout for the creators of the books that will fulfill that requirement. Many of the publishers are acquiring titles by international publishers.

In fact, there are more English speakers in the Asia region than the rest of the world — it is a major language in China and India. And where once children were only reading the English text for school requirements, there are now more and more children being exposed to reading for the enjoyment of it.

Two major competitions are open to folks around the world. Held in alternate years the AFCC runs the Scholastic Asian Book Award for an unpublished story inspired by Asia (entries close Oct. 31) and also the Singtel Asian Picture Book Award, for an outstanding unpublished picture book with a distinctly Asian theme. Both awards carry prize money of $10,000 each. This year the picture book award went to works from Mongolia and Singapore with Debra Chong (Singapore) receiving the manuscript award for If I Were (who didn’t have to travel far) and the illustration prize awarded to the BaaSanSuren Bolormaa for the work called Old City (a much further trip). As one of the judges for the Picture Book Award, I know the work it took to decide the winners.

There is the opportunity for illustrators to showcase recently published work in the Book Illustrators Gallery (BIG). BIG aims to showcase the work illustrators and artists, across genres and borders, to promote them to a wider audience. Work is submitted in the first months of the year, juried, and then requested art is sent for display. 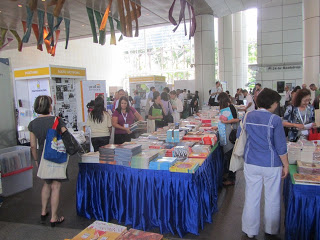 SCBWI is a sponsor of AFCC and so two popular session that feature in many SCBWI conferences around the world are also incorporated – First Pages (for authors) and First Look (for illustrators). A number of the Asian SCBWI regional advisors attend present at AFCC and in future years it is hoped that there will be enough SCBWI members attending AFCC to also have a SCBWI delegates meeting. An invitation only industry dinner is also part of the programme.

AFCC is also a publisher and this year a number of titles were published and launched at the festival including multilingual books, a collection of keynote speeches from previous AFCC’s and fist picture book, and my latest title – Water which is already being translated into a number of languages.

Of course the question that all children’s book creators – authors, illustrators and publishers – will be asking is will they publish my work in Asia? And the answer is yes. There are publishers based in the Asia region who will publish books by non-residents.

Yes, it is still difficult, like it is in most countries. Like nearly all publishers the Asian publishers publish works from residents but they also want to publish the best work for their readers so there are a number of publishers who request manuscripts. They also buy the rights to republish books that originate elsewhere. Additionally some of the Asian based children’s magazines are actively seeking writers and illustrators for their works. Many of these publishers attend AFCC.

For the next three years, the AFCC will be anchored at the National Library using the wonderful facilities within the building and also the undercover forecourt for the bookstall, stage, and for the publishers displays and rights markets. It is envisaged that the AFCC will be the equivalent of Bologna with rights being sold. Already planning is underway for the 2014 AFCC. As in previous years, SCBWI members receive a discount on registration.

So plan for 2014 now. Take a trip to Singapore and attend the Asian Festival of Children’s Content. The dates are 31st May to 4th June. Watch the website for details of the programme. And as well as a most excellent conference there is also lots to see, the wonderful food and great shopping!

More posts on the Asian Festival of Children’s Content and also the Kids Lit festival I attended in Manila straight after AFCC can be found at the following posts:

Christopher Cheng
is the award winning author of print and digital children’s books in
many genres. He is the Asia Pacific reporter for Cynsations, a board
member for the Asian festival of Children’s Content and he is co-chair of the International Advisory Board for the Society of Children’s Book Writers and Illustrators (SCBWI).

Candy Gourlay’s video of the 2013 Asian Festival of Children’s Content from PaperTigers Blog.