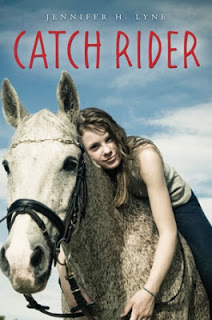 Jennifer H. Lyne is the first-time author of Catch Rider (Clarion, 2013). From the promotional copy:

Sidney Criser, 14, pursues her dream of becoming a catch rider–a show rider who can ride anything–despite her poor background and ferocious competition from more privileged girls.

Set in Virginia, Catch Rider is an authentic behind the scenes portrayal of a show barn and the elite, demanding world of equitation.


Catch Rider is not a horse book; it’s a book about horse people. It’s about facing adversity, feeling lonely and out of place, and never giving up.

When my agent, Alice Martell, called me to tell me that Clarion had made an an offer for Catch Rider, my four year old was having a play date with a friend and we were all in my living room.

I started talking to Alice, and my son demanded my attention, so I went into my closet and closed the door. Alice talks quickly, and I was trying to absorb it. She said “You’re very lucky, Clarion has made an offer, and the best part is that the publisher herself wants to be your editor.”

I was silent, trying to understand, while my four year old pounded on the door.

She said, “Jennifer, I hope you know how great this is! You should be really excited!” or something to that effect, and I said, “Alice, I’m standing in my closet.”

My friend, writer and English teacher Mary Whittemore was the other parent with me that afternoon, and I was so happy that she was, because as a writer and a teacher, she knew what it meant.

I didn’t
have to say a word. I didn’t celebrate – I was just so relieved. And then I thought – oh no, now I have to write the rest of the book. 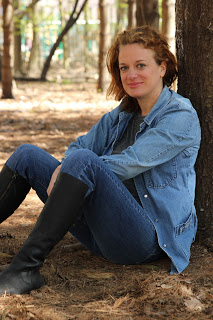 I did not sit down and have it pour out of me; I struggled a lot. The first thing I did was to write a diary entry by Sid, my protagonist. I wrote something that no one would ever see – as though she was writing something no one would ever see. It became apparent that who I thought she was, and who she actually was, were two different people.

Her diary entry was more visceral. She put on an act as being the toughest meanest kid around, but there was more to it. Both sides of her were real, and they were inextricable.

On the train up to Vermont Studio Center to finish the book, I felt totally uninspired, like something was wrong. I called a good friend, writer Chandler Burr, and told him. He said “Send me a page in first person, a page in second, and a page in third.”

I wrote the first and knew immediately that it was right. I started writing it in second, but a few sentences in, I stopped. And I already had it in third person. So I sent it to him, he agreed that I should do first (I just needed his validation).

So I emailed the publisher, Dinah Stevenson, and asked if I could change it. She said something like “Whatever feels right,” which was great. (All of this is on Amtrak, the computer wobbling around, losing Wifi, etc).

I called or emailed my agent who made sure I had asked Dinah. And then I did it – I wrote about 150 pages in two weeks at Vermont Studio
Center, because I had a contract, and I had to.

You do what you have to do. I always tell people to create pressure and limitations – it helps you focus and make decisions.

To me, much of writing is about
making decisions quickly and not fretting over them.